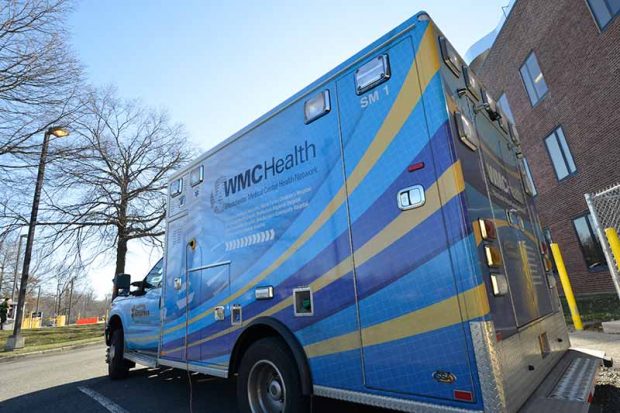 Emergency Medical Services in the Hudson Valley have come a long way in 44 years.

It’s hard to imagine, but before 1973, when Community Block Grants from the Department of Transportation helped establish Emergency Medical Service systems, there was no 911.

“If someone needed to go to a hospital, they had to call an ambulance company directly,” says Garrett Doering, MS, CEM, CHSP, CFPS, System Director, Emergency Management, Safety & Security at Westchester Medical Center, the flagship of the Westchester Medical Center Health Network (WMCHealth). “EMS really got a boost when people realized that an Army sergeant in Vietnam had a better chance of survival than someone on a city street.”

Though rudimentary emergency transport and care had been around since ancient times, it wasn’t until after WWII that many communities started community-based or commercial ambulance services, often using repurposed hearses. The medics who had served on the battlefields of Korea and Vietnam ushered in more advancement in pre-hospital care, and the first standardized training and certification programs were instituted in the early 1970s, when commercial and municipal EMS providers began to meet the needs of growing population centers.

The world of pre-hospital and emergency services is constantly improving, thanks to leading-edge communications technology. “A huge leap forward on critical-care ambulances was just instituted at Westchester Medical Center,” Doering says. “Ambulance nurses and doctors can speak directly with ER physicians through Mobile ICU technology and high-definition video. By transmitting integrated blood-gas monitoring, EKGs, patient medical records and other metrics, critical-care specialists can monitor data of patients in transit.”

Beyond evolving technologies, however, the success of today’s EMS systems is driven by the dedication of its teams, according to Doering. “Much like the rest of the U.S., about 80 percent of our EMS is provided by volunteers – ambulance corps, fire departments, ambulance or rescue teams – who get out of bed at 2 a.m. or leave their family picnic to go help someone facing what might be the worst day of their life,” says Doering.

Jonathan Berkowitz, MD, Medical Director, Regional Emergency Services, Inter-facility Transfer and Disaster Medicine at Westchester Medical Center, the Vice-Chair of the Westchstester Regional Emergency Medical Advisory Committee, serves on the Collaborative Protocols Group, which creates evidencebased guidance for statewide emergencycare providers. His colleague, Mark Papish, MD, Associate Medical Director of Emergency Medicine at MidHudson Regional Hospital, a member of WMCHealth and the region’s only Level 2 Trauma Center, is an active member of the Hudson Valley Regional EMS Council. Working together, and with medical professionals throughout the region, these organizations set protocols, process complaints and oversee pilot projects in the field.

“I have tremendous respect for the volunteers, commercial services, doctors and agencies that provide emergency services in a challenging pre-hospital world,” says Dr. Berkowitz. “We see all providers as our partners in providing regional patient services, and we thank them for their service as we celebrate National EMS Week on May 21- 27.”

Pictured above: WMCHealth’s Mobile ICU ambulances are a far cry from the refashioned hearses used by community-based services in the years following World War II.

WMCHealth partners with more than 80 providers across its network. Here, three of those main service providers discuss how they connect patients with WMCHealth’s state-of-the-art care.

“We provide ‘gap training’ on special topics, like hemostatic tourniquet application and disaster management,” says Volk. “The DES provides training in mass care management, communications and many other areas. We stress the importance of good communications and provide the coordination and tools for the emergency services community to utlilize during day-to-day and large scale events.”

The PCBES system includes volunteers in the ambulance corps and contract staff from the Countywide Medic Service.

The case breakdown is diverse. “We see a lot of highway trauma on Routes 84, 684, 9 and the Taconic,” says Anthony Sutton, Commissioner, “as well as lots of heroin and prescription-drug ODs.”

“Now, with cellphones, we can call in trauma alerts, heart attack alerts and strokes and transmit 12-lead EKG data from the field. It’s far better than the early days, when we had two-way radios that didn’t always work in remote areas.”

Given the proximity to Indian Point, “We have training exposure that others don’t have because we’re near a nuclear power plant,” says Sutton. “But protocols for communicable diseases, personal and professional equipment, emergency management zones, cross-contamination and radiological training are not foreign to EMS.”

RMC provides intercity transport via its 18-ambulance fleet and more than 100 staff offering mobile intensive critical patient care. It was among the first NYS units to use cellphones for telemetry and to transmit 12-lead EKGs during transit. “When a 911 call is dispatched, we have a two-tiered response, where paramedics and ambulances both respond,” says Michael Murphy RN, EMT-P, Chief of Operations for RPS and RMC. “We have a paramedic respond to each call for an onsite evaluation.”

All RPS staff are career paramedics and EMTs, and a team of eight tactical paramedics and physicians are embedded with Rockland County’s SWAT team. “Our mobile team transports a large volume of critical-care patients to WMC, including major trauma patients,” he says. RPS’ seven rapid response 911 vehicles are equipped with much of the same equipment found in hospital emergency rooms.

0
A New Hope
Is getting sunburned really a big deal?