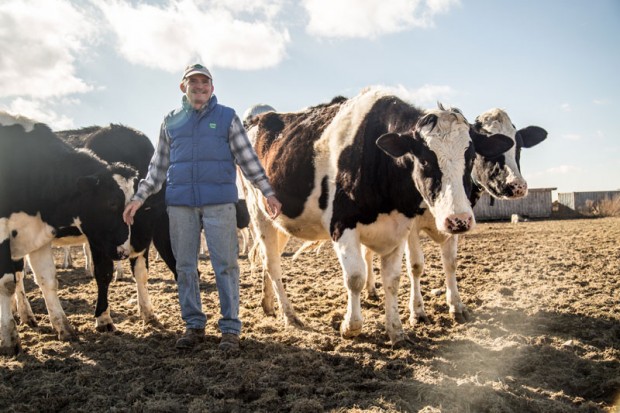 Did Jim Davenport really have a heart blockage? How a half-hour procedure gave him the answer.

As a dairy farmer in Ancramdale, NY, Jim Davenport is used to working till the cows come home. He rises to milk his herd at 3 a.m., then tends his farm until 10 p.m. But last September, he pushed himself too hard: “I lifted a trailer ramp and gave myself a hernia,” he says.

He needed surgery, yet a pre-operative stress test raised an unexpected red flag. “A cardiologist injected me with a radioactive substance, then took images of my heart before and after I exercised,” Davenport recalls. “The images suggested a possible blockage of a cardiac artery.” This news was troubling on two levels: First, “No surgeon would operate on my hernia if I had a heart problem,” he explains, because of a risk of a heart attack during the operation. Second, he couldn’t help thinking of his father, who himself had needed a bypass. Was he destined for one, too?

At a friend’s suggestion, Davenport sought answers at Westchester Medical Center (WMC), the flagship of the Westchester Medical Health Network. “We got him in quickly,” says Robert Timmermans, MD, who treated the farmer. To better assess his cardiac function, Dr. Timmermans used a minimally invasive procedure called radial artery catheterization, which, according to the doctor, is considered the “gold standard” for diagnosing coronary artery disease. First, he threaded a tiny catheter through Davenport’s arteries and into his heart; contrast fluid was then injected. Next, an X-ray was taken to see where the fluid traveled, so Dr. Timmermans could track the flow of blood to Davenport’s heart.

Not long ago, the catheter might have been inserted through a point in a patient’s groin. But Dr. Timmermans uses a technique to glide it in through the wrist, reducing the risk of bleeding. “You just feel a little pinch in the wrist as we give you Novocaine. After that, it’s not uncomfortable, because there are no nerve endings in the arteries,” he notes. Patients are only lightly sedated, via intravenous medication. “They can watch the screen and follow along if they like,” he adds. (Davenport says he took a power nap instead.) From set-up to conclusion, it took Dr. Timmermans just 30 minutes to assess the arteries on both sides of Davenport’s heart.

When his patient was reawakened and alert, there was good news to share: his arteries were clear so he was free to leave as soon as the effects of the sedation wore off. “I hadn’t felt badly; this just confirmed that nothing was wrong with my heart after all,” Davenport says, “which was great, because I was worried I’d have to break off my affair with Little Debbie — the snack cakes!” Dr. Timmermans informed Davenport’s cardiologist that there were no blockages and that he was officially cleared for surgery. “A nuclear stress test can produce a false positive, which is what happened to Jim,” explains Dr. Timmermans.

Jim Davenport remains grateful to Dr. Timmermans and WMC for seeing him so promptly and putting his fears to rest. “My friends had told me they have a deep bench at the hospital and would do a great job, and it was true,” he says. “From start to finish, everyone who treated me was outstanding.”