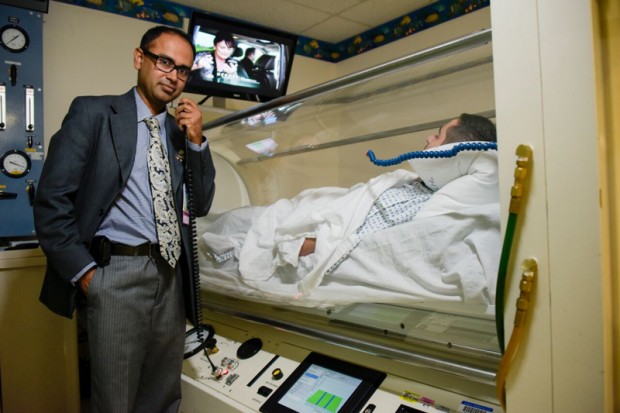 Hands-on care. For years, that’s been the go-to phrase for describing individualized, outstanding attention to patients’ needs. Yet, as Westchester Medical Center’s Kausik Kar, MD, knows, sometimes the best care isn’t hands-on at all, at least not in the literal sense.

Dr. Kar  is the director of the hospital’s Hyperbaric Unit, one of three available at WMCHealth facilities in the Hudson Valley.  Large acrylic cylindrical units, called hyperbaric chambers, are located at Westchester Medical Center, MidHudson Regional Hospital and Good Samaritan Hospital. Each is sized to accommodate a single patient, who typically remains inside for a two-hour period while pure oxygen is pumped into the sealed, pressurized space. For people with a variety of acute illnesses or stubborn wounds, it can be their best hope of healing — or even surviving.

“Hyperbaric therapy has a long history. It’s been around for more than a hundred years,” Dr. Kar shares. “Its benefits were discovered around the time they were building the Brooklyn Bridge.” Workers involved in such construction projects would sometimes develop what was then called “caissons disease,” better known as the bends — a painful, potentially fatal condition in which gas bubbles form in tissues or blood as an individual comes back to the surface from beneath the waterline. Doctors discovered that placing these divers in a high-pressure room or chamber containing pure oxygen made the gas bubbles in their blood dissolve. “The physicians also noticed that if the divers had chronic wounds, as well, the treatment often helped those heal, too,” Dr. Kar adds. This observation led to hyperbaric therapy for wound care.

Hyperbaric Treatment By the Numbers

2: Number of hours a patient remains in the hyperbaric chamber during  a treatment

5-7: Number of treatments most patients receive in a week (certain conditions may require up to

15: Number of minutes it takes for the chamber to fully pressurize

34: Internal diameter, in inches, of each chamber

1000+: Number of movies patients can watch during treatments, via a television placed on top of each chamber. A healthcare worker also sits beside the chamber at all times, monitoring the patient and communicating via intercom when needed.

When a person with diabetes gets a wound, it can heal slowly or incompletely or not at all, due to poor circulation. Hyperbaric therapy increases patients’ blood oxygen levels, stimulating the growth of new blood vessels and the formation of healthy tissue. “We had a diabetic patient who developed foot ulcers that had become infected very rapidly, leading to the loss of some toes and other parts of his feet,” Dr. Kar recalls. “He almost needed to have his feet amputated entirely. We had to give him about 40 treatments, but in the end we saved his feet.”

The indications for hyperbaric therapy go far beyond diabetes complications. Non-diabetics who’ve suffered severe injuries to their soft tissues, especially tissues in the lower extremities that have poor circulation, may require and respond to treatment, too. Dr. Kar and his team were recently able to save the leg of a young girl who was injured in a go-karting accident: “She visits us every month now,” he shares. Other beneficiaries include cancer patients whose skin and soft tissue have been damaged by radiation therapy, surgical patients with wounds that aren’t healing properly and motorcycle-accident victims.

Dr. Kar and his team also treat people who have suffered from carbon monoxide poisoning. “The gas is attracted to nerve tissue. If it remains there too long, it can cause changes in the body’s chemistry that can lead to permanent neurological damage,” he explains. “The high concentration of oxygen in the hyperbaric chamber helps dislodge the CO, minimizing the chance of long-term damage.” In fact, he adds, “We just treated a couple from Albany who’d passed out on their boat from a carbon monoxide leak. They each received three treatments within the first 24 hours in the hospital.”

Two other hospitals in the region — both members of WMCHealth — also offer extensive wound care. MidHudson Regional Hospital’s Center for Wound Healing and Hyperbaric Medicine, an Undersea & Hyperbaric Medical Society (UHMS) Accredited Facility, treats patients with leg ulcers or wounds related to diabetes, surgical wounds that have opened, skin grafts or surgical flaps that are slow to heal, bone infections, internal open wounds caused by radiation therapy, or any acute traumatic injuries. At Good Samaritan Hospital, the Wound and Hyperbaric Institute — with two chambers to treat patients — has achieved an accreditation with “Distinction,” an honor conferred by UHMS upon only three facilities in New York State.

Dr. Kar says his team is overjoyed when their efforts bring patients some much-needed relief and hopes to receive more funding for research.

For now, Dr. Kar and his team rely on their considerable experience, a resource few hospitals in the state, or even the country, can match. “It’s very challenging to run a unit 24/7, so we are trying to do our best,” he says. “We are very proud to be able to do it successfully.” •