A Personal Trainer Shows Unstoppable Determination After Losing His Leg 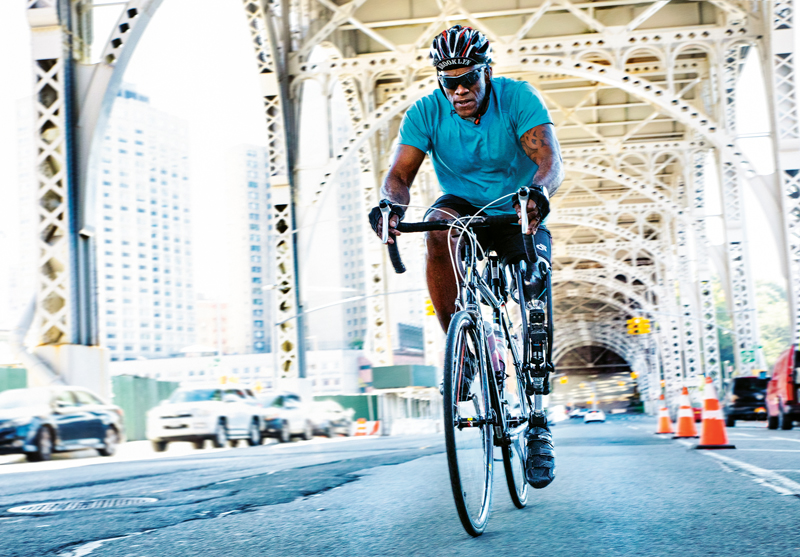 Since losing his leg seven years ago, Billy Davis has completed a triathlon, built his client base and funded purchases of prosthetics for those in need.

By Melissa F. Pheterson
As seen in the May/June 2019 issue of Advancing Care

On May 19, 2012, fitness expert Billy Davis’ motorcycle failed to negotiate a turn on a Catskill Mountains road, crashing and smashing his leg into a guardrail. “That day is seared into my brain,” he recalls. “My leg folded like an accordion upon impact.”

Matthew Pinkston, a staff sergeant with the U.S. Army stationed at the United States Military Academy at West Point, was on the highway exit right behind Davis’ motorcycle. “We saw him crash right in front of us,” Pinkston says. “I pulled our truck and 31-foot camper crossways into the exit. My wife and I jumped out. I ran forward to help while she signaled for traffic to stop.”

Pinkston recalls Davis “trying to get up, completely in shock and asking what was going on. I took his leg and unbent it, and the blood just started pouring out.”

Luckily, Pinkston had with him the combat medics’ first responder bag he’d carried during his tours in Iraq, complete with combat tourniquet, bandages and gauze. He quickly applied the tourniquet to slow Davis’ bleeding.

“Billy was in and out of consciousness and arrived in shock, meaning he had inadequate blood supply to his organs,” says David Asprinio, MD, Director of Orthopedic Surgery at Westchester Medical Center. “He had a very high heart rate and had lost a lot of blood, but he was fortunate. The tourniquet stopped further bleeding.”

After a massive blood transfusion, Davis was taken to the operating room, where orthopedic and vascular surgeons worked together to repair his shattered leg and severed blood vessels.

“The femur, or thigh bone, had broken in two places, so we placed a rod into the bone,” says Dr. Asprinio. For the tibia, or lower leg, we constructed a supporting frame with carbon-fiber rods, like an Erector Set.” Once the bones were addressed, the doctors hoped they could reestablish blood flow to the lower leg. Unfortunately, the lack of flow had starved the tissue there.

“The dead tissue in the lower leg is toxic to the body and can lead to infection or the failure of other organs, like the kidney. We therefore had to amputate above the knee,” Dr. Asprinio says. “We needed to preserve as much of the leg as we could while removing all the dead tissue to fight the infection.”

Recovering from his surgery and amputation, Davis recalls drifting in and out of consciousness. “When I finally woke up, I blurted out: ‘Can a brother get a cheeseburger and a Coke?’” 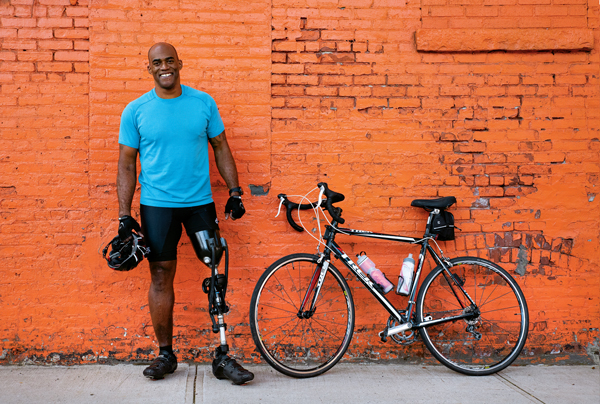 After three weeks in the Trauma Intensive Care Unit (TICU), Davis moved to an inpatient facility for physical therapy. “It was a very healing environment,” he says. “I got nothing but love and support.”

The road to rehab, however, was steep. “With an amputation at the thigh, Billy has to expend a great deal more energy than normal in walking, even with a prosthesis,” says Dr. Asprinio. “This amputation also makes it more challenging to walk with a normal gate and cadence.”

But Davis was undeterred, deciding to stay in his fourth-floor walk-up and even continue his personal training.

“I saw this as a challenge and an opportunity to stay fit,” says Davis. “It’s amazing what you can do when you don’t have a choice.”

On May 24, 2013, one year after he woke up from surgery, Davis says he posted a picture of himself eating a cheeseburger on social media, with the caption: “Happy Cheeseburger Day. Remember that day I didn’t die?”  In response, his followers posted their own cheeseburger pictures.

On the anniversaries that followed, Davis asked them to donate the cost of a burger to a GoFundMe for Wiggle Your Toes, an organization raising funds for people who need prosthetics.

The next challenge Davis embraced was training for his triathlon. “I never learned to swim, and I hated to run long distances, but I thought: I can’t let being an amputee be the hardest thing I do.”

Dr. Asprinio applauds Davis’ determination. “For someone who had this kind of injury, he’s doing remarkably well.” 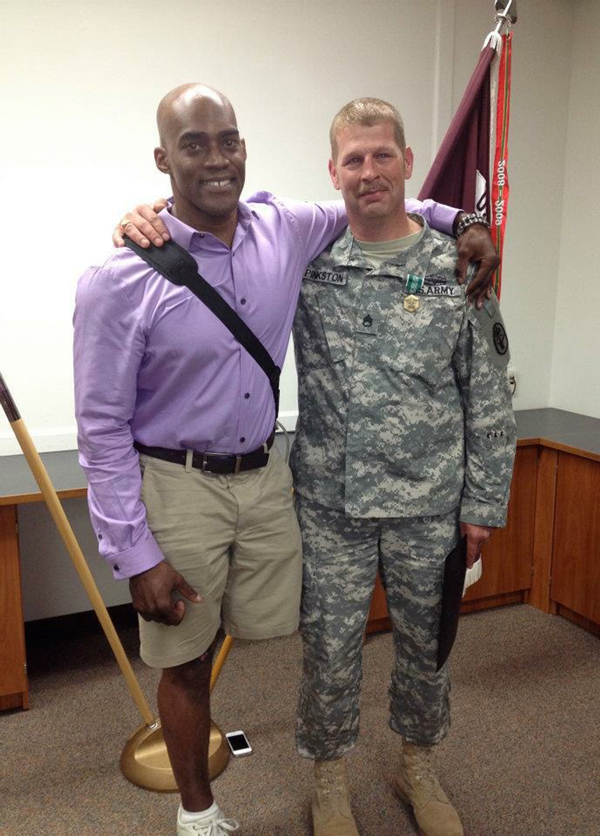 Davis and Matthew Pinkston, at right, have stayed in touch since the accident. Davis even flew to Texas to surprise Pinkston for his 50th birthday.

The memory of Davis’ accident also stayed with Pinkston, who has since moved to Texas. “After they swept him away, I wanted to know if he lived and how he was,” With coordination between West Point and Westchester Medical Center, Pinkston visited Davis during his recovery.

“There were no words exchanged,” Pinkston says. “We just hugged for half an hour. He thanked me for saving his life. Thinking about that moment still tears me up.”

In 2014, Davis surprised Pinkston by flying to Texas for his 50th birthday party. And one food truck that celebrates Cheeseburger Day recently created a “Sergeant Pinkston burger.”

“You can call it divine intervention, coincidence or luck,” says Davis, “but our whole lives led us into that moment together.”

On the expertise and critical care and he received at Westchester Medical Center, Davis muses, “For Dr. Asprinio, it may have been a typical day at work, but what he did for me was life-changing.”