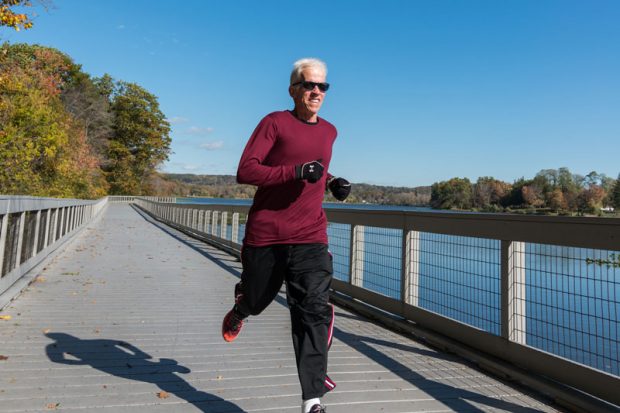 This retired NYC firefighter was the picture of health — and then he had a heart attack.

With a nor’easter predicted for Tuesday, March 14, 2017, Kevin Quinn decided to take advantage of the late-winter sun to jog outside on Monday. Quinn, 63, a retired New York City firefighter, jogged most days, rain or shine, hot or cold. But even in the calm before the storm, that run felt different.

“I was almost a mile into the run, and I felt something strange — a pressure or a pain in my chest,” he recalls. “Something stopped me. I asked myself: Was I short of breath? I was. Does my left arm hurt? It did. Normally, when I stop for aches and pains, they’re muscular; I slow down but keep running. But I knew these were symptoms of something serious.”

He was right. Two of the vessels that supply blood to his heart — the left circumflex artery and the right coronary artery — had built up enough plaque to narrow dangerously, obstructing flow. In fact, his circumflex artery (a critical branch of the left main coronary artery) had reached 100 percent occlusion, meaning no blood could pass to supply oxygen to portions of the left ventricle. His right coronary artery was 80 percent blocked. Quinn was having a heart attack, right in the middle of a West Nyack neighborhood.

Quinn didn’t have his cellphone to call 911, and while he should have rung the nearest doorbell, he admits he was still in denial at that point.

“I started to walk home very slowly, praying the whole way. When I did get home, I took a shower.” He called his sister, a nurse, to say he was thinking of driving himself to the hospital. “She said, ‘That’s the worst thing you could do,’” he recalls.

Suspecting a heart attack, she urged him to call an ambulance.

The first responders performed an electrocardiogram that confirmed the emergency. Knowing they had to bring Quinn to the most advanced level of care as quickly as possible, they took him to Good Samaritan Hospital in Suffern, a member of the Westchester Medical Center Health Network (WMCHealth). Quinn was admitted and taken straight to its cardiac catheterization lab, where Cary Hirsch, MD, Medical Director of the Cardiovascular Institute at Good Samaritan Hospital, met his patient and got to work.

His team performed an angioplasty, a procedure that involves inserting a catheter through a blood vessel in Quinn’s groin, and threading it through to the heart to assess and reverse the blockage.

“We had to reopen the totally occluded artery right away,” says Dr. Hirsch. This meant inserting a stent — a mesh tube coated with medicine that slowly releases into the artery to physically open the vessel and prevent it from restenosis, restoring the flow and precious oxygen the heart muscle needs to survive.

“The doctors and nurses explained what they were doing and what I was feeling,” Quinn recalls. “I was awake during the whole procedure, and our conversation took my mind off how serious this situation could have been. It made me feel safe.”

With his patient stable and resting comfortably, Dr. Hirsch decided he would place a stent in the right coronary artery on Wednesday.

After nightfall, a winter storm assaulted the Hudson Valley with more than two feet of snow and hazardous wind gusts. Had Quinn’s symptoms been delayed just one day — perhaps striking when he was outside, shoveling snow — the ambulance would have faced hazardous conditions while transporting him to Good Samaritan Hospital, losing critical time in the period before the heart muscle suffers irreversible damage.

On Wednesday, Dr. Hirsch performed a routine check of the left circumflex artery and found another near-complete stenosis, or blockage, slightly downstream in the artery from where Monday’s stent had been placed. 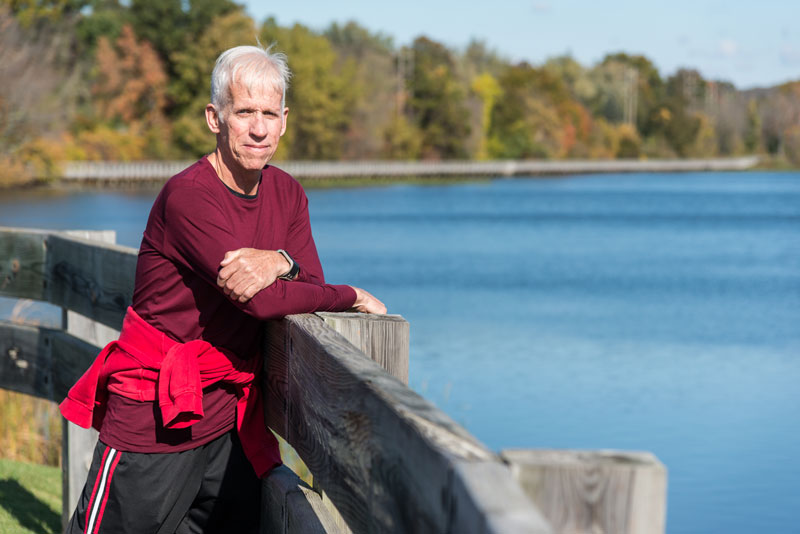 Kevin Quinn is running again, thanks to the advanced level of care he received at Good Samaritan Hospital. But now, he brings his cellphone on his workouts.

“Part of the problem with acute myocardial infarction [heart attack] angioplasty is that when you inject the artery, it’s completely occluded,” Dr. Hirsch says. “To use a driving analogy: You’re traveling at night, without headlights, and you don’t know if there’s more road ahead or not.” But now that the first stent had restored blood flow to the upper segment, lower segments had reappeared on X-rays to reveal further blockage. Dr. Hirsch had to insert another stent at the distal circumflex artery. Then the third stent was placed on the right side, as planned.

From there, Quinn recovered quickly. “I felt immediately better,” he says. “The whole blockage was slowing me down, making me tired.”

Dr. Hirsch and his team advised him to modify his diet to reduce red meat and sodium levels. A course of cardiac rehabilitation helped him return to walking and eventually running, though now he always carries a phone.

“Everyone thought I’d be the last person this would happen to,” Quinn says.

For Dr. Hirsch, this irony underscores a key aspect of heart disease.

“Among acute myocardial infarction patients, he’s an outlier: not sedentary, not diabetic or overweight, not a cigarette smoker,” Dr. Hirsch says. “Two out of three coronary arteries had major blockages, but he was running a significant amount, without symptoms. His experience shows that lifestyle is not the be-all and end-all to health and that exercise isn’t always the ‘cure’ for heart conditions. There may be genetic factors, such as hypertension, that place an individual at risk for coronary disease, despite living a healthy lifestyle.”

Quinn’s stents, combined with lowered cholesterol levels, should prevent further buildup of plaque on his arteries. Dr. Hirsch still monitors his condition and advises him on matters such as vitamins and jogging in the cold.

“I was impressed from the start with the team at Good Samaritan Hospital,” Quinn says. “From the EMTs to the nurses to Dr. Hirsch, they all pitched in to save my life.” •