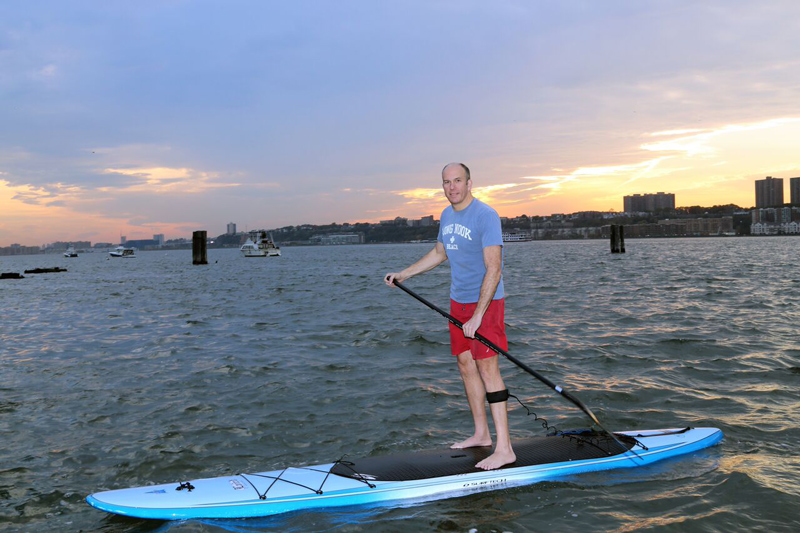 When this Westchester Medical Center physician needed cardiac care, he chose his own hospital over a New York City facility.

Ivan Miller didn’t feel alarmed that morning in 2009 when he woke up woozy. “I was dizzy, and when I’d stand up I felt weak,” he recalls. “I figured I was coming down with something.” But the next day, the strange symptoms persisted.

It was a situation that would send most people to a doctor. But Miller is a doctor, then working at a Manhattan hospital. “I went to my ER and did an EKG,” he says. (An EKG, or electrocardiogram, is a test that measures the heart’s electrical activity.) The results showed that Dr. Miller, then 43, was having atrial fibrillation, or AFib, an irregular, often rapid, heartbeat. “I became a patient in my own ER,” he says. Ultimately, he was diagnosed with paroxysmal, or intermittent, AFib. After nothing unusual was found, electrical energy was passed through Dr. Miller’s chest, to reset his rhythm.

Yet Dr. Miller knew from his medical training that paroxysmal AFib tends to recur periodically and gradually becomes more frequent. “First it was once a year, then four times a year, and then it was more frequent,” he explains. By the time Dr. Miller became Medical Director of the Emergency Department at Westchester Medical Center (WMC), the flagship of the Westchester Medical Center Health Network, in 2012, he was having AFib episodes more often. Though a prescription medication was addressing the condition and preventing complications, he grew weary of the so-called ‘pill in the pocket’ approach, especially since he’d tend to get AFib just when he was trying to relax. “My type of AFib — vagally mediated AFib — never occurred while I was working or exercising, but it would frequently occur while I slept,” he says. By 2015, he felt it was time for a surgical intervention.

For help, Dr. Miller turned to his colleague Sei Iwai, MD, Director of Cardiac Electrophysiology at WMC. “I had already consulted with top physicians in Manhattan — so the fact that I chose Sei says a lot,” he notes. Together, they decided that Dr. Miller was a good candidate for a corrective operation called catheter ablation, in which muscle cells within the heart that are sending rogue electrical signals are selectively isolated, or ablated, using heat.

“We think that many episodes of AFib originate in the area that connects the heart’s upper-left chamber, or left atrium, and the pulmonary veins feeding blood into it,” Dr. Iwai explains. “Little sleeves of muscle tissue there can sometimes send out their own electrical impulses that travel through the heart’s upper chambers, causing them to beat so rapidly they actually quiver. In ablation, we target these spots by burning the tissue around them and thus isolating them, preventing further rhythm irregularities from AFib.”

The operation was scheduled for August 2015. Dr. Miller was more than ready.

He faced the six-hour operation with determination and confidence. “I felt I was in good hands with Sei,” he shares. And he was. Dr. Iwai and his team perform more than 120 AFib ablations a year on patients from Westchester and neighboring counties. “We are the only hospital in the lower Hudson Valley with the ability to do ablations,” Dr. Iwai says. “You need to have a sophisticated lab, an experienced nursing team, excellent anesthesiology services and cardiac surgery backup.” Still, says Dr. Miller, it was an emotional experience to find himself on a stretcher, being wheeled past his colleagues. “People I know and work with were standing there and saw me in the stretcher instead of standing next to it,” he recalls. “It’s an intense thing to hand yourself over to the doctors and nurses.”

During the procedure, which is performed under general anesthesia, two thin catheters were inserted through Dr. Miller’s leg veins, up through his heart’s right atrium, and into the left atrium. Another catheter, called an intracardiac ultrasound catheter, was positioned in the right atrium. This catheter provided imaging feedback to Dr. Iwai, ensuring that there were no unexpected abnormalities or complications, such as bleeding in the surrounding area.

This minimally invasive procedure requires expertise and complex equipment. “We use a 3D mapping system to re-create the geometry of the left atrium and keep track of where we are ablating,” Dr. Iwai says. “It can tell us if our catheter is in adequate contact with the muscle, but not so hard up against it that it could perforate it.” He also had to make sure the circle of ablated tissue he created was effective in blocking electrical impulses, which required testing it with the other catheters.

Once he was satisfied with his results, Dr. Iwai finished the operation. “I woke up briefly in my room later on, and my nurse was great,” says Dr. Miller. And, he adds with a laugh, “The food was surprisingly good!” After a one-night stay he was back home and returned to work soon after.

At the time of this interview, it had been more than a month since the surgery, and Dr. Miller had had no AFib episodes (for his type of AFib, the operation has a success rate of roughly 80 percent).

While he’s still waiting for that fact to sink in, there’s one thing he’s had no trouble realizing. “I love my hospital,” he says. “I had always loved working here, and the variety of patients, the staff and the amazingly talented doctors and nurses. I was under no obligation to go to Westchester Medical Center for my operation, even though I work there; I could have gone to any hospital in the city. For me to choose a particular doctor and a particular hospital—it was an intense thing.  I made the right decision; Westchester Medical Center gave me great care, and I’d make the same choice all over again.” •