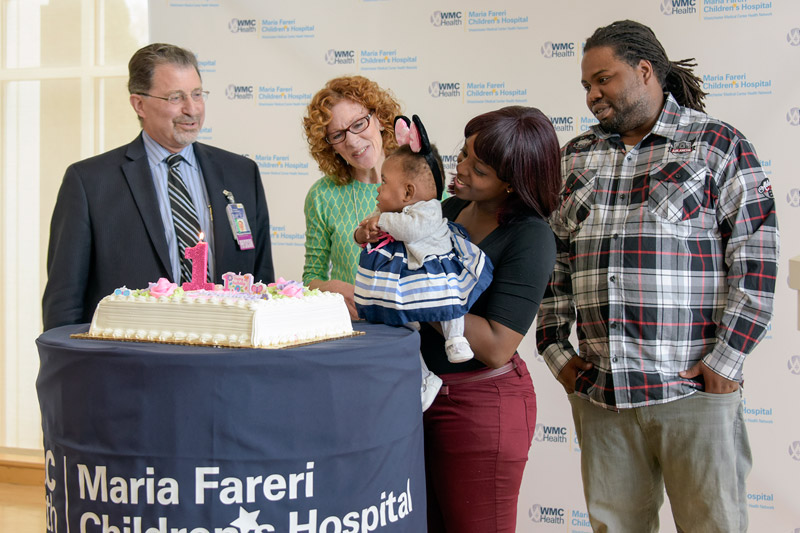 How the staff at Maria Fareri Children’s Hospital helped a 9-ounce baby not only survive, but thrive.

A child’s first birthday is always a cause for celebration, and Tamaya Berry of Poughkeepsie certainly enjoyed hers in April with true toddler flair. Sporting Minnie Mouse ears and a pretty dress, she bounced with delight in her mother’s arms as friends and family sang “Happy Birthday” and presented her with a cake.

But the party wasn’t in her home; it was at Maria Fareri Children’s Hospital, a Member of the Westchester Medical Center Health Network (WMCHealth). The guests included some of our region’s top medical personnel, because Tamaya’s birthday was more than just a milestone; it was a miracle. The previous spring, she’d arrived at the Children’s Hospital’s Regional Neonatal Intensive Care Unit (RNICU) weighing just 9.3 ounces. Yet, thanks to the tireless efforts of the staff, Tamaya survived and even thrived, becoming the lightest baby ever discharged from that unit and one of the lightest to survive in New York and the United States.

It was only fitting that Tamaya would come back to Maria Fareri Children’s Hospital for her first birthday, marking the milestone in the company of the incredible team who had helped her reach it. “She was smiling and laughing,” says Sue Malfa, RNC, MSN, Nurse Manager of the Regional NICU. “It was amazing.”

A Dramatic — and Dangerous — Delivery

Tamaya’s journey began at a hospital near her family’s home in Orange County. Her mother, Dominique Fevrier, had given birth to a premature baby previously and knew that her second pregnancy would also be high-risk. Sure enough, despite careful monitoring and bed rest starting at 12 weeks, complications began to arise. “I stopped making enough amniotic fluid,” Dominique shares. “At 25 weeks, Tamaya weighed what a 22-week-old [fetus] would.”

The 28-year-old mother-to-be had developed two other frightening complications, as well. She had preeclampsia, a potentially dangerous pregnancy condition marked by high blood pressure. She also had a placental abruption, which is when the organ that nourishes the fetus starts peeling away from the womb’s wall. The devastating upshot: Tamaya would need to be delivered by Cesarean at once — some three and a half months early. A neonatologist affiliated with Maria Fareri Children’s Hospital was there for the birth.

According to Fevrier, during the procedure, she temporarily went into cardiac arrest. She was unaware when her daughter, weighing approximately two iPhone 6S, came into the world. Nor did she realize it when Tamaya was helicoptered to Maria Fareri Children’s Hospital in Valhalla, the only facility between New York City and Albany with a Level IV NICU. “We cover 5,000 square miles,” says Edmund F. La Gamma, MD, Chief of the Regional NICU. With its advanced equipment and specially trained staff, Maria Fareri Children’s Hospital is where the area’s smallest, sickest babies go.

Even there, Tamaya would prove to be an extraordinary challenge.

“She Took my Breath Away”

A half-dozen experts in the Regional NICU set up Tamaya in a heated, humidified incubator. She was put on a ventilator and other support. Malfa, who has been a nurse for 30 years, will never forget her first glimpse of the impossibly minuscule newborn. “She took my breath away — she was the tiniest baby I had ever seen. Her arms and legs were thinner than my pinky,” she recalls. “I remember thinking: How are we going to put an IV in her? How are we going to give her medication? But she was moving around. She had all her fingers and toes, long legs and arms, and beautiful eyes. Tamaya was very much alive, and we needed to support her efforts.” 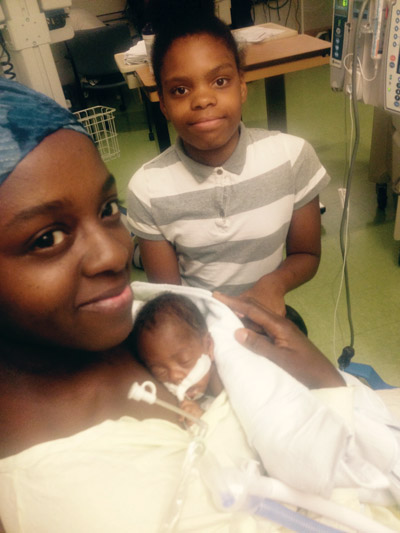 Tamaya was only 9.3 ounces (barely heavier than two sticks of butter) when she arrived at Maria Fareri Children’s Hospital.

A wonderful development in neonatal technology would prove to be the initial difference between life and death for Tamaya. Only the month before, the hospital had procured the smallest breathing tube available in the industry. “We had debated whether to buy it. It was so small, it was hard to imagine when we’d use it,” shares Dr. La Gamma. “But had we not had it, Tamaya could not have been intubated. She would not be alive today.” The inexpensive plastic tube was thinner than a straw, “yet it looked like a hose coming out of Tamaya’s mouth,” remembers Malfa. When Fevrier was finally able to visit her baby several days later, she was shocked at the sight. “I broke down,” she recalls. “Tamaya didn’t look finished; you could see all her organs because her skin was so thin. I didn’t think she was going to make it.”

The staff at Maria Fareri Children’s Hospital’s Regional NICU, however, pledged themselves to a different outcome. Already used to teamwork, they coordinated Tamaya’s care with uncompromising exactitude. “As we changed shifts, the nurses would talk for an hour, going over every move they had made,” says Malfa. “We did a lot of group thinking. If Tamaya didn’t respond well to a treatment, we’d back off and readjust.” Much of her medication was painstakingly administered by hand, since her IVs couldn’t always deliver such tiny doses. Surfactant, a substance that has a soapy texture, was injected into Tamaya’s lungs, to keep her air sacs open. “We even planned out each time we reached over her inside her incubator,” says Malfa. “The tiny swish of air might cool her down.”

Nutrition was also a primary concern. “We had to accommodate bone growth and brain growth, and also try to get her intestines colonized with the right bacteria to digest foods and perform other vital functions,” Dr. La Gamma explains. Tamaya received both IV and oral nutrients, including breast milk from the hospital’s newly established donor bank. All the while, the staff kept close watch on their patient for complications and infections. “I’d come in at 6 a.m. each day, and the first thing I would do was check on her, holding my breath,” says Malfa. “We had to take it hour by hour for weeks at a time.”

Health, Hope and a Happy Homecoming

By the six-week mark, Tamaya was alive — and growing. “We finally felt she was going to be all right,” Malfa remembers. Six weeks into Tamaya’s hospital stay, her mother was able to hold her for the first time. “I could still fit her in the palm of my hand,” she recalls. “But she was feisty. She always has been.”

But there were more complications to come, including feeding issues and battles with pulmonary hypertension — high blood pressure due to her immature lungs’ inability to function efficiently. Things as simple as receiving a necessary immunization could cause a crisis. In all, Tamaya had five cardiac arrests in her first few months of life. Yet, she bounced back each time, becoming ever larger and stronger. By fall, she was tipping the scales at 7 pounds, 12 ounces — 13 times her birth size, according to Dr. La Gamma. Finally, Tamaya was able to go home, where Dominique’s partner, Tyquan, and Tamaya’s seven brothers and sisters were all waiting to greet her. 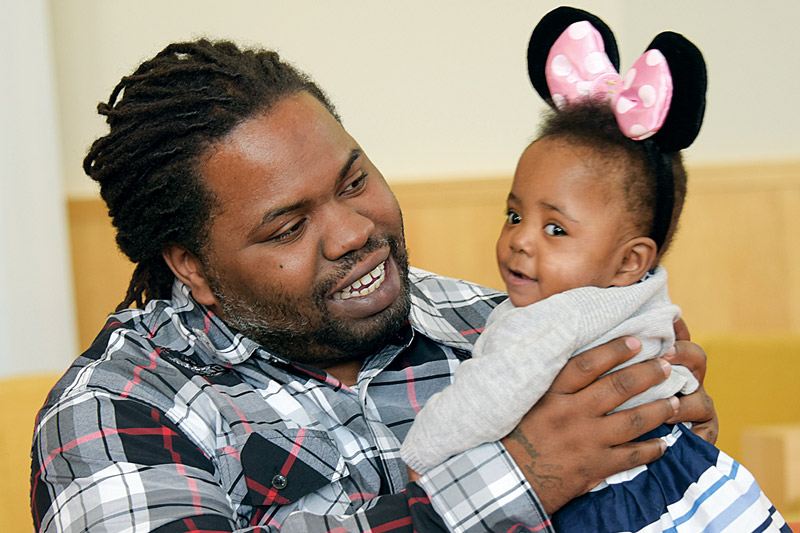 Tamaya and her father, Tyquan, at her 1st birthday party at Maria Fareri Children’s Hospital; the one-year-old is a big Minnie Mouse fan.

Today, Tamaya is a happy tot “who loves Minnie Mouse,” says Fevrier. “She’s able to say ‘Dada’ now and has two teeth on the bottom and one on top.” Though she still needs supplemental oxygen and must be monitored regularly by a half-dozen physicians, Tamaya is an indisputable dynamo. “She claps, laughs, and throws stuff at you,” notes her amused mother. “She’s teething and tries to pull you by your ears and bite your face — and she loves to eat bananas.”

But it’s Tamaya’s insatiable appetite for survival that Dominique appreciates most of all — that and the outstanding care her daughter received at Maria Fareri Children’s Hospital. “Her nurses were great, and Dr. La Gamma always came through,” says Fevrier. “Everyone communicated to make sure Tamaya was all right, she adds, her obvious gratitude accompanied by the music of Tamaya’s shrieks of joy in the background. “I am truly blessed.” •