After Years of Pain From a Hidden Condition, This Grandmother Got Help From Good Samaritan Hospital

When Kathleen Paladine’s leg pain became so bad that “it felt like somebody was twisting it,” she blamed it on a relapse of her sciatica.

Experiencing pain in her thighs and the back of her legs, she turned to chiropractic treatments, acupuncture, physical therapy and even B12 shots and anti-inflammatory injections for relief. But nothing helped. “I couldn’t walk more than 100 feet without having to stop,” recalls the Congers resident. “I became a potted plant.”

After 4 ½ years of nearly constant pain, her primary care doctor referred her to a cardiologist, who ordered angiograms of her legs. When the test results indicated long arterial blockages, the 70-year-old grandmother was referred to Michael Schwartz, MD, Chief of Vascular Surgery at Good Samaritan Hospital, a member of the Westchester Medical Center Health Network (WMCHealth).

Dr. Schwartz diagnosed Paladine with Peripheral Artery Disease (PAD), a hardening of the arteries that causes a buildup of plaque in blood vessels, and recommended vascular bypass surgery. She chose to have her surgery at Good Samaritan Hospital when she learned her hospital stay would be two days rather than a week at another hospital, as was suggested by another vascular surgeon.

Dr. Schwartz performed vascular bypass surgery on Paladine on October 26. He used one of her veins to create a conduit to bypass her arterial blockage. Though her incision was nearly 17 inches long, she was walking shortly after the surgery. Following her initial physical therapy sessions in Good Samaritan Hospital’s Intensive Care Unit (ICU), she returned home on the third day to continue at-home physical therapy sessions.

Paladine has since regained good quality of life and is looking forward to taking walks around Rockland Lake again when the weather warms.

Good Samaritan Hospital recently achieved the top five-star rating for its performance in Peripheral Vascular Bypass, according to the leading online healthcare resource, Healthgrades. This marks the second straight year that the hospital earned this top rating in an evaluation of nearly 4,500 hospitals nationwide. 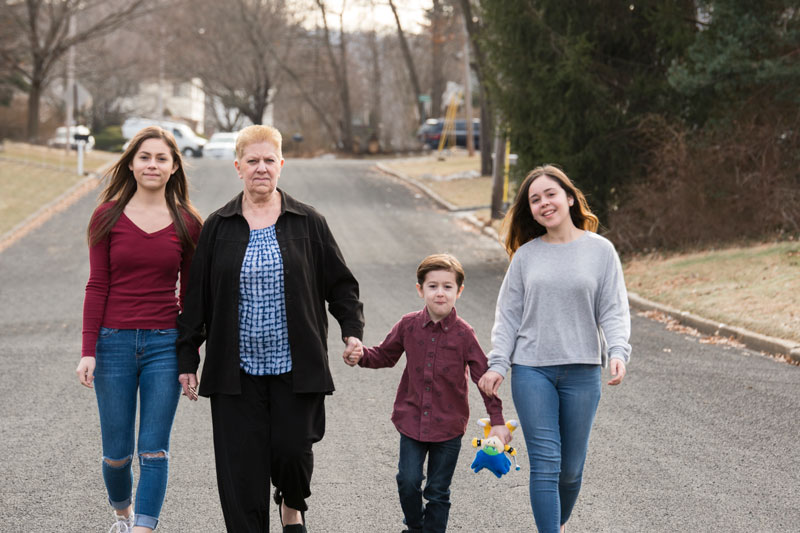 Paladine can enjoy walks once more and is no longer “a potted plant.”

The team includes experts in surgery, interventional radiology, vascular anesthesia and wound care, as well as vascular operating-room nurses and physical therapists. Dr. Schwartz says, “Our team is uniquely equipped to care for vascular patients. Our surgical ICU is able to mobilize patients quickly and get them back home, usually within two days following surgery.”

“I had excellent care at Good Samaritan Hospital,” says Paladine, whose only other prior health issue besides sciatica was high blood pressure. “I had never had surgery before, and I was petrified, but I was so impressed. Dr. Schwartz is phenomenal and I felt very, very comfortable under his care. The same is true for all the nurses and the rest of his team, too,” she says.

However, Paladine also cautions: “If you have symptoms similar to what I had, don’t take it for granted that they’re coming from one source. I had gone to have an MRI, and it showed that my sciatic nerve was pinched. I thought that was my problem before I had the additional testing done.”

Though most common among people in their 60s, 70s and 80s, the symptoms of vascular artery diseases may also present earlier in people with a family history or among diabetics and heavy smokers.

“We have better tools to diagnose vascular disease, and there’s a plethora of minimally invasive options available for treatment,” says Dr. Schwartz. “Some of the newer statin drugs and blood thinners have decreased the number of people with symptomatic vascular diseases. Nevertheless, we see a fair number of cases in smokers or diabetics who need treatment.”

Dr. Schwartz advises people to regularly visit their primary care doctors to discuss any issues or symptoms. “Exercising regularly, eating correctly and avoiding smoking can all help prevent worsening vascular disease. Most people with PAD can and should be treated conservatively, with exercise and physical therapy. Unfortunately, there aren’t any drugs that are really effective in treating it when it develops,” says Dr. Schwartz. “In Kathleen’s case, initial attempts to treat her with conservative measures were ineffective, so we opted for surgery.”

Paladine moved from Staten Island to Congers four years ago to live with her son, daughter-in-law and three grandchildren (ages 16, 14 and 6). Now that she’s successfully recovered from her vascular surgery, she’s back to enjoying being a homemaker and cooking dinners each evening for her family.

Best of all, she’s comfortable taking walks in her neighborhood again, her favorite form of exercise, and she hopes to get back on her treadmill again soon, too. “Before my surgery, I had terrible cramps in my calves and it took me 10 to 15 minutes to walk to the bus stop with my grandson. It was only about five houses away from our home, but that short walk felt like climbing Mount Everest to me. I had to stop every five or six steps to rest. Now I can do it in just five minutes, without stopping. I do my own housecleaning in our house, go shopping and stay busy.”

“ I see a big improvement, and I’m glad I got my surgery done. I wish I’d done it sooner.”