Extending the Life of a Purple Heart 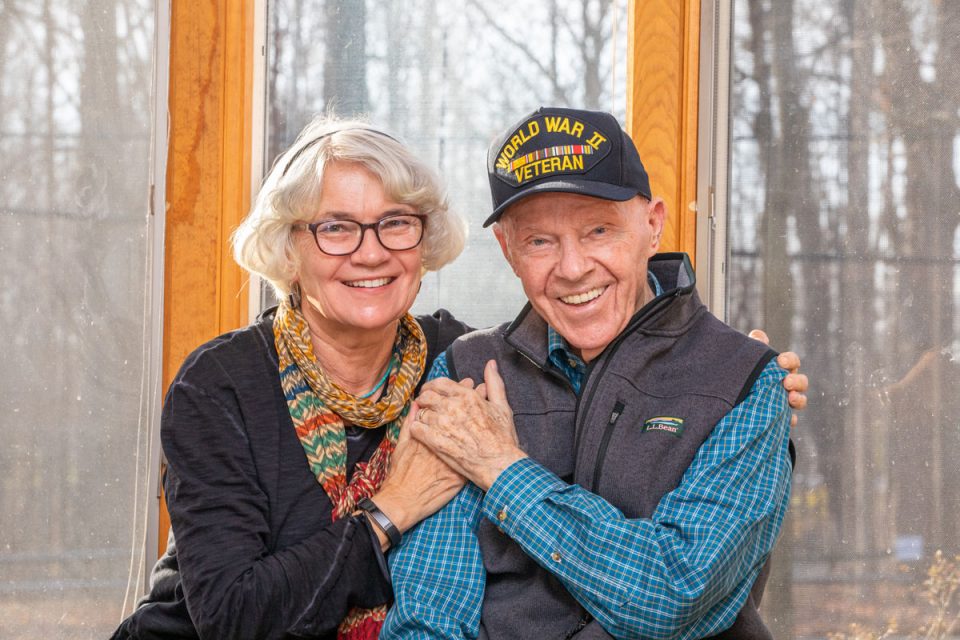 Chester Lubeck and his daughter, Christine, on the porch of their home. Photos by Kenneth Gabrielsen

When a decorated local veteran needed an aortic valve replacement, he came to WMCHealth.

By Melissa F. Pheterson
As seen in the February 2021 Issue of Advancing Care.

Raised in an orphanage, risking his life to defend his company in World War II’s Battle of the Bulge, escaping a German prisoner-of-war camp: Chester Lubeck has faced his share of challenges. Last summer, just two months shy of his 96th birthday, he faced another: heart failure.

Upon awakening in his home one morning, he felt pressure on his chest. “My daughter Christine was upstairs, and I called up: ‘You’d better get me to the hospital,’” Lubeck recalls.

“I felt the team treated us as if we were their own family. We got so much information prior to the TAVR and had a thorough follow-up appointment after the procedure. Everyone was encouraging and made my father feel special.” – Christine Klinger

Christine brought him right away to a local hospital where he was diagnosed with heart failure. Given the complexities of his situation, Lubeck was transferred to Westchester Medical Center, the flagship of WMCHealth, for advanced care.

There Hasan Ahmad, MD, Cardiology Director of the Westchester Medical Center Valve Team, placed stents to restore blood flow through the coronary arteries that had severe blockages. But Lubeck also had a dangerously narrow aortic valve, one that was obstructing the flow of blood between the heart’s pumping chamber (left ventricle) and the rest of his body. The narrowing was so severe it was causing his organs to fail.

He needed a valve replacement. Yet open-heart surgery was high risk for this Purple Heart recipient, no matter how much he’d already survived.

The solution: a minimally invasive procedure known as transcatheter aortic valve replacement (TAVR), which uses a catheter to insert a new valve within the diseased valve. Once deployed, the new valve gently clears the old valve out of the way, and the tissue in the replacement valve takes over the critical role of conducting blood flow. TAVR is typically performed through an incision in the groin that is smaller than an inch, does not typically require general anesthesia and requires only one to two nights in the hospital.

“TAVR is an incredible advance in the field of cardiology and cardiac surgery,” says Joshua Goldberg, MD, Surgical Director of the Westchester Medical Center Transcatheter Heart Valve Program. “It has allowed many patients similar to Mr. Lubeck to receive life-saving treatment who otherwise would be considered too high risk for any surgery.”

Because aortic stenosis develops and progresses gradually, the typical symptoms — such as shortness of breath, fatigue, chest pain, or dizziness — can often be subtle and are often attributed to other problems. “Many patients say they are short of breath or fatigued because they are getting old,” says Dr. Goldberg. “The truth is, in the case of aortic stenosis, the symptoms are from the diseased valve, not from age or other factors. Once a patient has symptoms, it is imperative they get the valve fixed.”

TAVR is a procedure that can be done “for anyone, not just high-risk patients,” Dr. Goldberg notes. “If you are diagnosed with aortic stenosis, do not delay treatment. Seek treatment as soon as possible. Your cardiologist will work with you to evaluate options, which have broadened in recent years. Transcatheter valve therapies are evolving rapidly, with new devices and new technologies.”

Before this procedure, Chester was last in the hospital to have his tonsils removed ­— at 6 years old. “Without the TAVR, he wouldn’t have lasted a year,” Christine says. “For him, it was a lifesaver.”

Before: “We use a Shared Decision-Making Model, centered around the patient and his or her family, that also includes their referring cardiologist and our multidisciplinary team members,” says Dr. Goldberg. “The team reviews all the images and comes to a consensus about the best treatment for the patient, then reviews this with the referring physician, the patient and the family.”

During: Surgeons make a small incision in the groin, then guide a catheter with a replacement valve into the aorta. The new valve is positioned into the narrowed area, then expands to widen the opening and optimize blood flow. Lubeck’s particular valve had bovine pericardium tissue (heart lining tissue from a cow), with a polymer resin skirt and frame for reinforcement and guarding against leaks.

After: Patients typically stay one to two days in the hospital; once at home, they should avoid heavy lifting for about a week. A cardiologist will schedule an echocardiogram at one month, and each year thereafter, to evaluate and monitor the valve.

For patients who suffer from a narrowing of a heart valve, or aortic stenosis, an alternative to open-heart surgery is now available. TAVR (transcatheter aortic valve replacement) has been offered at Westchester Medical Center, the flagship of WMCHealth, since 2017 and is now offered at Good Samaritan Hospital. This minimally invasive approach enables the replacement of a diseased aortic valve, typically through the use of small punctures in the groin.

“We are excited that we have more options to intervene on a diseased aortic valve — both with traditional open-heart surgery to replace the aortic valve (SAVR), and now TAVR. These options allow us to select the optimal course of treatment based on each cardiac patient’s specific condition,” says Cary S. Passik, MD, FACS, cardiothoracic surgeon, and Surgical Director of the TAVR program at Good Samaritan Hospital.

“This approach can result in less discomfort for the patient, shorter hospital stays, quicker recovery and fewer post-procedure restrictions than traditional, open-heart surgery,” adds Steven Lansman, MD, Director of Cardiothoracic Surgery at Westchester Medical Center, the flagship of WMCHealth. “TAVR is especially effective for older patients, who might be considered too frail to survive open heart surgery. Having this capability locally is a game-changer for patients in Rockland County.”