A Kindergartner With Aplastic Anemia Is Saved By Her Younger Sister 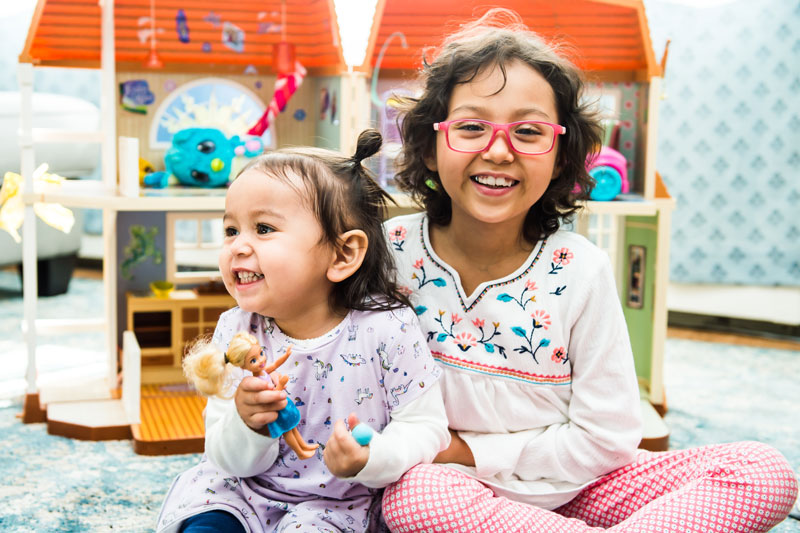 As her daughter fought for survival, one mother faced a life-altering choice that was also her family’s best chance.

By Melissa Pheterson
As seen in the September 2020 Issue of Advancing Care.

With a daughter in kindergarten, a newborn and a busy career, Alejandra “Alex” Maranon Gomez had plenty to juggle in early 2018. The Pleasant Valley resident expected no surprises when she took her older daughter, Carmen, for her annual checkup with their pediatrician, but to the doctor’s concern, tests revealed a very low platelet count in Carmen’s blood.

Carmen was admitted to Maria Fareri Children’s Hospital, a member of the Westchester Health Network (WMCHealth), where Mitchell Cairo, MD, Chief of Pediatric Hematology, Oncology and Stem Cell Transplantation, found that Carmen had aplastic anemia, a disease in which the bone marrow fails to produce enough blood cells.

To make an appointment with a pediatric hematology/oncology specialist at Maria Fareri Children’s Hospital, call 914.493.7997 or visit www.mariafarerichildrens.org/hematology-oncology to learn more.

Carmen’s best chance at survival was receiving stem cells following a bone marrow transplant from a donor who didn’t have the disease. Siblings are often strong candidates. And for Carmen, the best match – in fact, the perfect match – was her baby sister, tiny Edith. Alex and her husband consented to a sibling-to-sibling stem cell transplant.“It was very scary to have Edith under anesthesia, to know that she had needles inserted in both her hip bones,” Maranon Gomez says. “She was just a baby, but I had faith. I felt like if Edith were older, she would have chosen to do it.

“But I knew,” adds Maranon Gomez, “that Dr. Cairo and his team were going to take care of both of our daughters.”

Doctors infused Edith’s donated cells into Carmen’s bloodstream on July 19, 2018, and Carmen went home in September. But a terrifying twist sent her back before Halloween.

Edith’s cells had begun to attack the healthy cells in Carmen’s body, a condition called graft-versus-host disease. The team at Maria Fareri Children’s Hospital responded with another unique treatment, called extracorporeal photopheresis (ECP), which uses light-activated medication to reduce this inflammatory response (see sidebar). Fortunately, the only facility performing ECP is at Westchester Medical Center, the flagship of WMCHealth, on the same Valhalla campus; that program is also directed by Dr. Cairo.

What happens during extracorporeal photopheresis?

Carmen went home in March of 2019 but returned in May with further complications. The immunosuppressant drugs she was taking for her graft-versus-host disease had activated a normally dormant virus called BK, which began to attack her kidneys.

This time, treatment included an extremely personalized approach: gathering white blood cells from Alex and activating them into a mighty cell-killing army. “We sought and received approval from the FDA to develop specific cytotoxic T-lymphocytes, which we call CTLs, against the BK virus,” says Dr. Cairo.

“It’s a difficult and stressful situation. [But] Dr. Cairo and his team were always open to finding solutions. Child Life specialists were also there, helping the kids understand what was happening and to help them through the stress of daily needles and medications. To parents in the same situation: Ask as many questions as you can and always make sure you feel comfortable with the answer you’re getting.”
– Alejandra Maranon Gomez

Through the Cellular Tissue and Engineering (CTEL) lab at Westchester Medical Center, Dr. Cairo’s team took the cells from Alex that had the ability to fight BK virus. After being processed in the laboratory, these CTLs were given intravenously to Carmen for a targeted attack on the virus while sparing her organs potential damage from antiviral drugs. After 10 CTL infusions, the BK virus disappeared. “She didn’t need dialysis,” says Dr. Cairo. “Now, her kidneys are almost back to normal.”

Carmen was released on September 5, in time to start second grade. “She loves to go swimming, play on the playground, color, draw and dance,” says her mother. “She doesn’t let anything get her down.”

“Our personalized approach, precision medicine, advanced hematotherapy and CTEL lab all combined for a successful outcome for Carmen,” he says. “This was groundbreaking and life-saving.”

“We gave medication before the sibling-to-sibling transplant to suppress Carmen’s immune system, so it wouldn’t reject Edith’s cells,” says Dr. Cairo. “We gathered stem cells from her sister’s bone marrow, then we infused those cells into Carmen’s bloodstream and provided supportive care until the cells started growing and making new cells – a process we call engraftment.”

Engraftment usually occurs within 30 days of a transplant. Hospitalization for six to nine months is typical, and Carmen completed most of first grade while she was in the hospital.

WMCHealth’s Cellular and Tissue Engineering Lab (CTEL) is a 6,800-square-foot facility, meeting the rigorous standards of the U.S. Food and Drug Administration. All pediatric and adult blood and marrow transplantation programs and other regenerative cellular therapy programs at Westchester Medical Center and Maria Fareri Children’s Hospital rely on cell manufacture and processing in the CTEL.