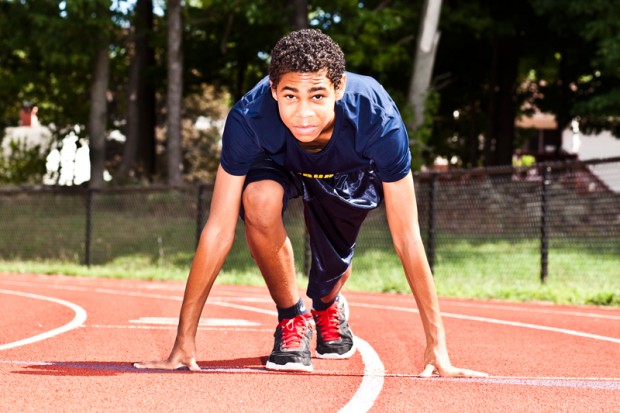 A devastating lawn-mower injury didn’t sideline this future track star, thanks to a pediatric surgeon at Maria Fareri Children’s Hospital.

It was a lovely summer night almost 10 years ago. Social worker Michelle Young Gould of New Windsor was working a 3 p.m. to 11 p.m. shift at what is now MidHudson Regional Hospital, a Member of the Westchester Medical Center Health Network. At 5 p.m., she checked in with her husband, Richard, who told her that everything was fine and that he was going outside to mow their lawn with their son Ryler, age 4. This was something they did routinely, with Ryler pushing his own plastic toy mower alongside his dad. An hour later, Michelle received one of those calls every parent dreads — someone from the local hospital was on the line, reporting that her son had been in an accident and that his foot had gotten caught in a lawn mower.

Michelle quickly drove to the hospital, where she met Richard, who’d come in with Ryler. They were told that there was a significant amount of damage to Ryler’s foot, with grass, dirt, bugs, and even the boy’s sock in the wound. Successful surgery was performed, though the parents were told he would probably need additional surgeries as he grew. “If he didn’t have on his Thomas The Tank Engine sneaker, he would have lost his foot,” says Michelle.

Four years later, when Ryler fell and broke his arm, he was taken to Maria Fareri Children’s Hospital, a Member of the Westchester Medical Center Health Network. He was seen by Damon DelBello, MD, who specializes in pediatric orthopedics. Though Dr. DelBello was brought in to treat Ryler’s arm, he noticed Ryler’s residual limp from the original lawn-mower accident and monitored his progress for the next two years. Evenutally, notes Michelle, “his foot started to become deformed, and he had trouble walking and was in chronic pain.” When a cortisone shot, muscle relaxants and physical therapy didn’t help, Dr. DelBello performed reconstructive surgery, using cadaver bones, in January of 2013. “As a result of the accident, he had lost soft tissue and ligament support,” Dr. DelBello says, “which led to the development of several deformities.”

Ryler’s recovery was slow and painful, including strong pain medication. He spent six weeks in a wheelchair, to allow the cadaver bones to knit with his own, and by July of that year, he was walking unaided; he spent the next two years healing. 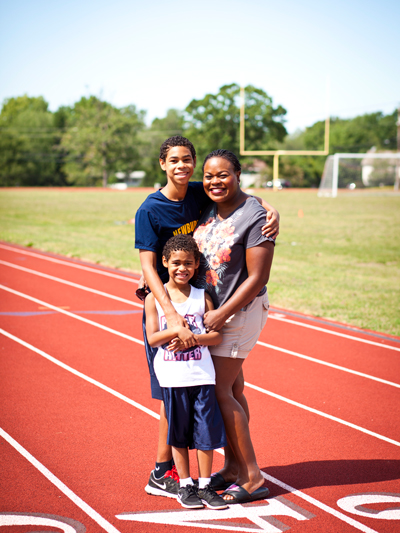 Ryler with his mother,
Michelle, and brother, Rayden.

His mom recalls one difficult day after the second surgery, when he asked her if he’d ever walk again. “I said, ‘Yes,’” she continues, “but in my heart I really didn’t know if this was true. He replied, ‘If I am ever able to walk again, I am going to run.’” And did he ever. When he entered seventh grade in 2014, he heard an announcement for varsity track tryouts. He received a medical clearance from Dr. DelBello and not only made the team, he was the youngest student on the varsity track team at Newburgh Free Academy in Newburgh.

In his 22 years in practice at Westchester Medical Center and Maria Fareri Children’s Hospital, the doctor has worked with other patients injured by lawn mowers. “Fortunately, lawn-mower injuries are not terribly common,” notes Dr. DelBello, “but we do see on average two to three a year. Ryler’s injury was relatively minor compared to other devastating lawn-mower accidents that many times result in much greater loss to the soft tissue and ligaments. The key points,” he adds, “are that these are severe and devastating injuries and can result in partial or complete amputation. There is no such thing as a safe lawn mower, so we need to prevent the accidents.” (See sidebar for suggestions.)

Ryler’s recovery is something he doesn’t take for granted. “He was temporarily a child in a wheelchair who couldn’t get up to play with friends,” continues Michelle. “He understands what it’s like to have a disability. He was lucky it was temporary, but he knows it could have been permanent, so he decided he wouldn’t let this hold him back.”

Now 13, the talented scholar-athlete with a 95 grade-point average quickly made his mark on the track team, placing second in a 4×4 relay, second in 400-meter hurdles, and third in 110-meter hurdles at various meets last spring. “My main goal,” says Ryler, “is to keep running and make it to college and get a scholarship.” His advice to other children facing challenges? “If you think you can do it, you probably can — so you should just try your best.”

To say that Ryler and his family are grateful to Dr. DelBello is a massive understatement. Michelle Young Gould elaborates: “Early on, Dr. DelBello said to Ryler, ‘I am not going to let you lose your childhood,’ and he was true to his word.”

⋅ Don’t mix kids with lawn mowers. “There should be no joyriding on riding mowers, even with a parent,” says Dr. DelBello. Keep kids occupied and, ideally, indoors when mowing the lawn; accidents happen in a split second and before parents are able to react.

⋅ Remove all debris before mowing. “Be aware that freshly cut grass is slippery and may cause a child running near a lawn mower to slip and fall directly into it.”

⋅ If an accident does occur, immediately call 911. “While you wait for their arrival, apply pressure directly to any open wound, to control bleeding.” Do not transport your child to the hospital in your own car. Ambulances offer sophisticated medical equipment and EMTs trained in  procedures such as resuscitation, which can be administered en route.