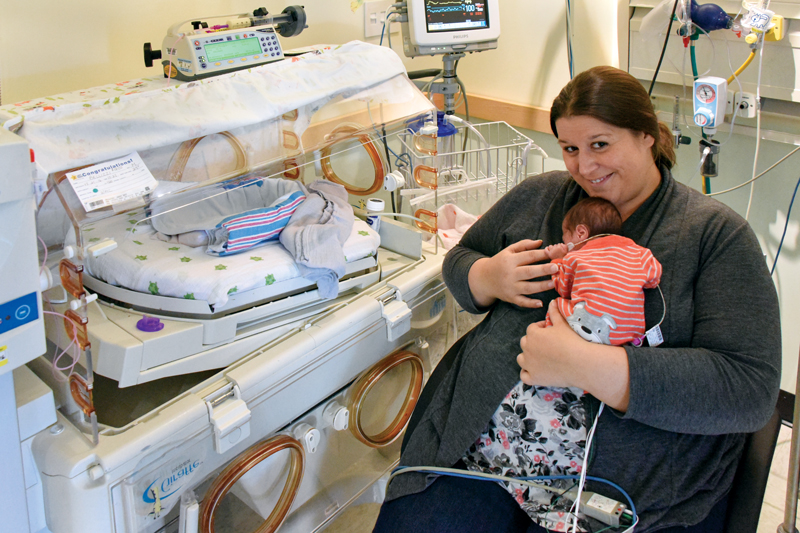 Alana Bellizzi holds her son Rocco in the Regional Neonatal Intensive Care Unit. Rocco is part of the donor milk program, but is fed through a small feeding line due to his small size.

How doctors at Maria Fareri Children’s Hospital are fighting to make donor-milk available to all families.

Since 1982, infants in Westchester Medical Center’s regional neonatal intensive care unit, or RNICU, have received state-of-the-art medical care and support services. The smallest and most  vulnerable babies at the unit, located at Maria Fareri Children’s Hospital (MFCH), a member of the Westchester Medical Center Health Network (WMCHealth), can now get something more due to a program known as Liquid Gold: the unique nutritional advantage provided by human breast milk.

While the benefits of breast milk are well-documented, it’s particularly beneficial to preemies, due to their higher risk for medical problems compared to full-term babies. That’s because breast milk contains antibodies and other substances that can help protect preemies from infections and disease, reduce the duration of intravenous feeding, and nurture their still-developing digestive, immune and nervous systems. Furthermore, because they require more diverse nutrients, preemies benefit greatly from the unique nutritional profile that breast milk provides, enabling them to leave the hospital sooner.

With this compelling medical data in mind, Liquid Gold was launched in 2014. “At that time, we began providing a human-derived, breast-milk fortifier to those of our premature babies whose mothers were producing sufficient breast milk,” explains Boriana Parvez, MD, an attending neonatologist at the Children’s Hospital and Medical Director of the Liquid Gold Premie Milk Bank.

Even with this critical objective achieved, Dr. Parvez, who is also a certified lactation consultant, was still keenly aware that “some mothers are unable to provide a full amount of milk due to their own medical or occasional lactation problems. To further the health of the greatest number of infants, we decided we should find ways to support those moms and their babies, too.” So, the program set an ambitious goal: to provide certified-donor breast milk to all of the RNICU’s smallest, most vulnerable babies, weighing two pounds or less.

According to Dr. Parvez, the advantages of breast milk nutrition have been shown to extend far beyond infancy. “Because it prevents many complications, human milk affects the babies’ neurodevelopmental outcomes and quality of life,” she notes.

Likewise, it may help them grow up stronger and fitter. “Human milk also has antibodies that help the immune system develop, and it encourages the growth of beneficial bacteria in the baby,” says Edmund F. LaGamma, MD, Chief of the RNICU at Maria Fareri Children’s Hospital. This means improved disease resistance and digestion, plus possibly less lifetime risk of diabetes or obesity.

While its impact is potentially life-saving, it also comes at a high premium: the milk costs roughly $300 to $400 per baby weekly, placing it out of the financial reach of many families.

Armed with this information, Dr. Parvez and her staff set out to secure funding to help provide donor milk to the greatest number of infants. Several charities, including the Heckscher Foundation for Children, the W.K. Kellogg Foundation and the Countess Moira Charitable Foundation — all agreed to support Liquid Gold’s initiative, as did private donors Mr. and Mrs. Sean Dugan and SiteOne Landscape Supply. Thanks to their generosity, in 2015, Liquid Gold began providing certified-donor breast milk to all RNICU babies weighing less than two pounds.

Building on this success, Dr. Parvez now looks to expand the program even further.   The next phase will focus on the collection of milk – which contains an especially rich concentration of calories and nutrients – from moms of premature infants with an abundant milk supply. From there, it will be safely processed and distributed to other RNICU premature babies whose moms have an inadequate milk supply, thus benefitting even more infants.