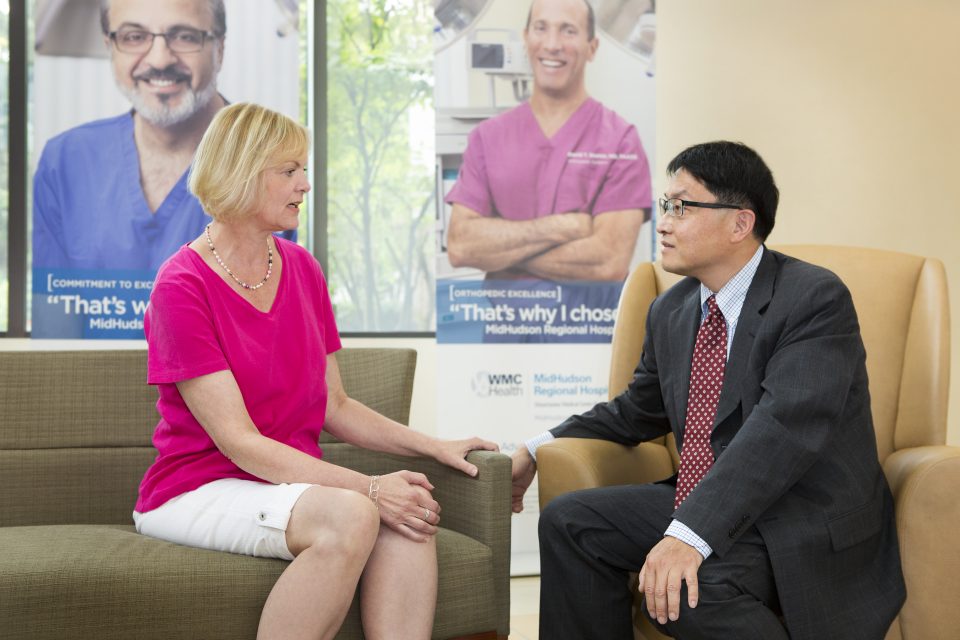 A complex surgery gives a Hyde Park woman hope in her fight against pancreatic cancer.

Peggy Norton’s life changed in an instant. Recently retired from her career as an IT professional, the 60-year-old Hyde Park resident was fit, healthy and attended her gym regularly. “I had no health problems,” she says, “until I suddenly did.”

In the spring of 2017, Norton developed digestive issues and the symptoms of jaundice, a condition characterized by pale, yellow-tinged skin. She went to the emergency department at MidHudson Regional Hospital, a member of the Westchester Medical Center Health Network (WMCHealth), where a series of blood tests and an ultrasound discovered a mass in her pancreas. Then, a CT scan delivered the news that it was most likely cancer.

“Painless jaundice is the textbook presentation for pancreatic cancer,” says Xiang (Eric) Dong, MD, a surgical oncologist at MidHudson Regional Hospital. The following Monday, an endoscopic ultrasound was conducted to take a sample of the lesion for biopsy. A cytopathologist confirmed that the lesion was malignant.

Norton and her husband, Bill, were, of course, frightened by the diagnosis. “It is very difficult going from a very healthy, fit, active person to being told you have pancreatic cancer, seemingly overnight,” she says. Worse yet was the knowledge that this form of cancer is particularly dangerous. “Everything I had heard about pancreatic cancer was that it seems to be a death sentence,” she says.

Though the lifetime risk for pancreatic cancer is 1.5 percent, according to the American Cancer Society, and it accounts for about three percent of all cancers in the U.S., it is also responsible for about seven percent of all cancer deaths. It is difficult to treat because it is impossible to detect at an early stage, the way that early- stage breast cancer may be found by a mammogram. By the time any symptoms are noticed, the cancer is likely to have spread to other parts of the body.

However, for a subset of patients — about 15 percent, Dr. Dong says — the cancer has not spread, and those patients who are otherwise healthy and relatively young may be eligible for a complicated operation known as the Whipple procedure (named for the first American surgeon to perform the operation). Norton was one of those fortunate few and was deemed a good candidate for the procedure by Westchester Medical Center’s tumor board, which reviews all cancer cases to plan out the best possible course of treatment.

But because MidHudson’s expert staff includes surgeons like Dr. Dong, combined with the state-of-the-art surgical technology available there, Norton was able to have this complex surgery close to home. “MidHudson has all the necessary equipment,” Dr. Dong says. “It is very unique for a community hospital to be able to accommodate this complicated surgery.”

Norton was far from Dr. Dong’s first Whipple patient. “We felt confident in him, in his experience performing this procedure and in his communication and willingness to talk about the details of the situation.”

The surgery was done just three days after her initial diagnosis. “I spent Sunday thinking I needed to get my affairs in order,” Norton says, still emotional several months later. But she credits the nurses and staff in the ICU and the recovery floor for helping her through this difficult time. “They were on top of everything,” she says. “When I was having a really bad day, a nurse stayed and spent time with me. I really appreciate that. Given that being in a hospital is never a fun thing, this experience was as good as it could have been.”

The operation was, too. Dr. Dong was able to preserve a part of her stomach that might have needed removal, which helped her recover and digest food better afterward. And post-op pathology reports showed that her lymph nodes were free of cancer, greatly reducing the odds that it may have spread. She is now undergoing chemotherapy, to further lower those odds.

Six weeks after the surgery, Norton was back to her fitness routine at the gym.