One Woman Beats the Odds Against Heart Disease 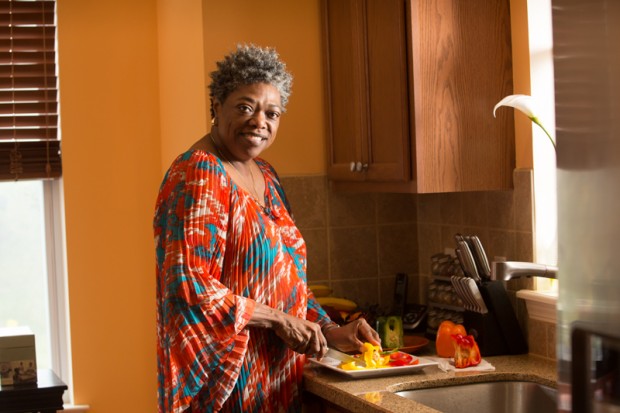 How one woman — with her cardiologist’s help — is reducing the effects of heart disease.

If you had to guess the number-one killer of women in the United States, what would you say? Coming in at the top of the mortality list, according to the Centers for Disease Control and Prevention (CDC), is heart disease, which claims one out of four American women. By contrast, deaths from all forms of cancer combined are in second place. If you got the right answer, give yourself an extra pat on the back, because the CDC also says more than half of all American women are completely unaware of the most lethal risk for one-quarter of the national female population.

Donna Johnson, a single mother who immigrated to the U.S. from Jamaica when she was 15 years old, might have missed that answer, too. Intent upon making a difference in the world by going undercover in the world of narcotics, this NYPD police officer submitted to a job-required test called a coronary calcium scan seven years ago, when she was in her 50s. The results stunned her.

“I had plaque around my heart,” says Johnson of the news she got that day. It came as a complete surprise, especially as she had no family history of heart disease. Before the day was out, she’d contacted her primary care physician, who referred her to Tanya Dutta, MD, FACC, a non-invasive cardiologist at Westchester Medical Center (WMC), the flagship of the Westchester Health Network. Together with Johnson, Dr. Dutta was able to not only identify her risk factors – high blood pressure and high cholesterol levels – but also work with her to treat them successfully.

Identifying heart disease and treating risk factors might sound like no-brainers, but the presence and risk factors of the disease are often hidden. Doctors are now working harder to diagnose the early stages of heart disease, especially in women.

“There was a recent study in the New England Journal of Medicine that evaluated four factors of heart disease,” says Dr. Dutta.  “For women over 55 with normal cholesterol, normal blood pressure, no diabetes and who are non-smoking, the risk of having a heart attack by age 80 is less than one percent.” By contrast, having two of those risk factors at age 55 raises the risk to 20 percent – a huge increase. Additional risk factors include obesity and a sedentary lifestyle.

Faced with numbers like that, it’s critical for women to identify their vulnerability and take steps to manage their health, especially from ages 35 to 50. “By controlling the risk factors, we can change the likelihood of heart disease dramatically,” says Dr. Dutta. “You have the hand you’re dealt, but what you do when you’re young actually matters.”

There are some differences among minorities. While 5.8 percent of all white women, 7.6 percent of black women, and 5.6 percent of Mexican-American women have coronary heart disease, Dr. Dutta says that, especially with minorities, more work is needed to promote awareness of the disease.

Also, while many women routinely persuade family members to seek medical help when needed, they tend to confine their own medical care to yearly visits to their OB/GYNs, who must then act as primary care providers. While OB/GYNs don’t traditionally look for or treat heart disease, they are increasingly being urged to order tests to detect this quiet killer.

New research shows that a woman’s choice of her OB/GYN might have some logic. The American College of Cardiology has published research that links a common yet dangerous complication in pregnancy, called preeclampsia, to heart disease later in life. “No one knows why [the link exists],” says Dr. Dutta. Some researchers believe that pregnancy could be a stress test for the body and that preeclampsia predicts future heart disease. Or does preeclampsia actually cause heart disease? Although these questions need answers, the link between the two is significant.

Managing the risk factors is one thing. Learning about heart attacks is another. During a heart attack, the blood vessels supplying oxygen to heart muscle become partially or completely blocked. Without a constant supply of oxygen, these heart muscle cells begin to die. The longer it takes to get medical attention, the more heart cells will die. Recognizing the symptoms of a heart attack and getting immediate help can be the most decisive factor to surviving a heart attack.

“Only 65 percent of women who think they might be having a heart attack will immediately seek a medical evaluation,” says Dr. Dutta. Why the remaining 35 percent don’t is not clear, and the delay costs some women their lives. 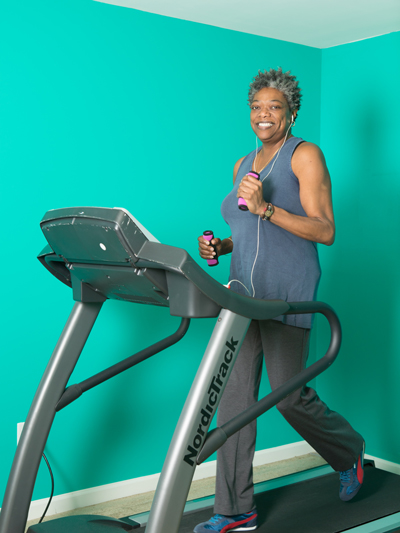 Donna Johnson is doing everything she can to manage her health, including following a vegetarian diet and exercising daily.

Perhaps it’s because, according to the American Heart Association, most heart attacks in women start slowly, with mild pain or discomfort. Women might decide to wait much too long before getting help. Often, the symptoms of a heart attack are dismissed as acid reflux, the flu, or normal aging. It could also be that women are scared or that their concerns for their families keep them from seeking immediate help.

Perhaps mild or no symptoms lull some women into believing they can’t really be having a heart attack. Maybe women don’t want to be taken to the emergency room unless their symptoms are recurring. The reality, however, is that almost two-thirds of women who die suddenly of a heart attack had no previous symptoms.
“If you go to the ER, and you’re not having a heart attack, that’s a reason to celebrate,” says Dr. Dutta. “Even then, doctors will run tests and help a woman to address her risk factors. We’d rather not see her [for the first time] while she’s having a heart attack.”

Donna Johnson is taking no chances. Retired at the end of October, she’s careful to manage the medications controlling her cholesterol and high blood pressure. She switched to a vegetarian diet and exercises every day.  She still looks out for others and believes women can help each other.
“We play that nurturing role all the time, and when we’re in that situation [of having symptoms], we have to let each other know,” Johnson says. “We need to look out for each other.”

What are the symptoms of a heart attack?

According to the Centers for Disease Control and Prevention, the following are major signs of a heart attack:

• Chest pain or discomfort, such as pressure, squeezing, fullness or pain in the center or left side of the chest, lasting for more than a few minutes and possibly intermittent.
• Upper-body discomfort, including arms, back, neck, jaw or stomach
• Shortness of breath, either along with or prior to chest discomfort
• Nausea
• Cold sweat
• Light-headedness
In addition to the symptoms above, women’s symptoms may include:
• Upper-back pain
• Extreme fatigue
• Indigestion
• Heartburn
If you believe you might be having a heart attack, minutes count. Call 911, so emergency-care personnel can start medical interventions up to (an average of) an hour earlier than having someone drive you to the emergency room. Do not drive yourself, unless you have no other option. The important thing: Get help immediately!

0
Steadying the Nerves
Back On Track