Music to Her Ears 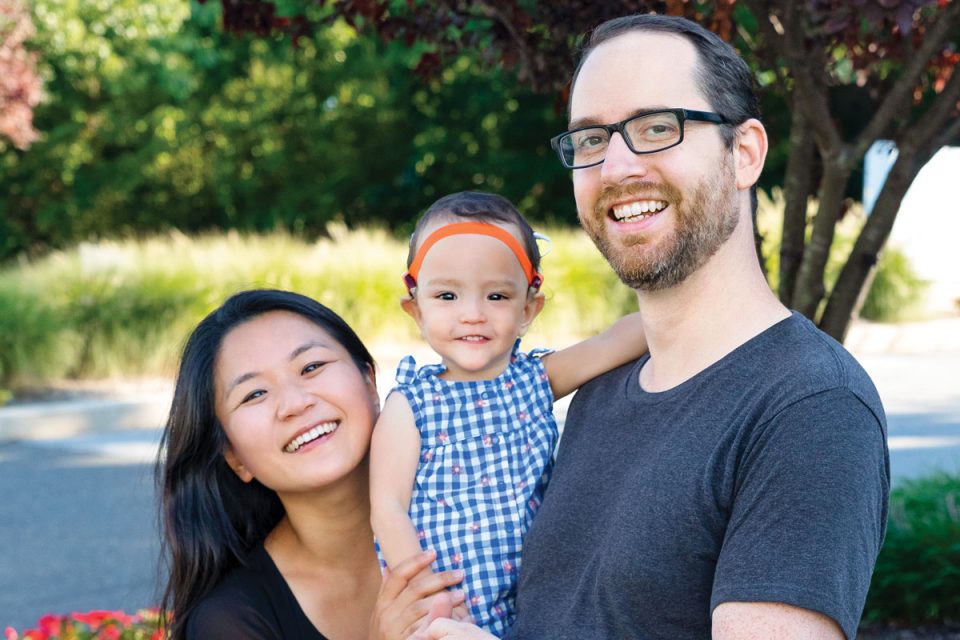 By Laurie Yarnell
As seen in the December 2020 Issue of Advancing Care.

So when the Dobbs Ferry couple learned that their baby daughter was profoundly deaf in both ears, they were “devastated,” recalls Kim, a cellist. “I cried in the doctor’s office. But once we got over the initial surprise,” she continues, “our mindset was, ‘What can we do to fix this?’”

Leah Kim Casey was born at 25.5 weeks of pregnancy, on September 15, 2018, at Maria Fareri Children’s Hospital, a member of WMCHealth. She weighed just one pound 7.6 ounces and was cared for in the Neonatal Intensive Care Unit for six months. After failing an infant hearing screening, a subsequent evaluation revealed that she had bilateral profound sensorineural hearing loss. According to the American Academy of Audiology, as many as 15 out of every 100 babies born prematurely have hearing loss at birth vs. one out of 1,000 full-term infants.

“If your child is facing something like this, ask questions of all the professionals and reach out to other parents. There’s an amazing community of people and plenty of empathic families out there who understand how overwhelming it is and are more than willing to talk to you.” —Trent Casey, Leah’s dad

When she was six months old, Leah saw Katrina R. Stidham, MD, Chief of Neurotology and Director of the Balance Center and the Cochlear Implant Center at Westchester Medical Center. The Cochlear Implant Center is the only facility of its kind between New York City and Albany, providing comprehensive, centralized services for patients receiving cochlear implantation (CI). A successful technology pioneered in the late 1980s, CI allows certain deaf individuals to hear and speak.

Dr. Stidham performed a bilateral simultaneous CI on Leah at Maria Fareri Children’s Hospital, when she was just over a year old. The three-hour procedure — which involved placing a cochlear stimulator in the cochlea, or spiral cavity, and a receiver stimulator, or speech processor under the skin behind each ear — was performed under general anesthesia. “The procedure is very safe and easily tolerated,” notes Dr. Stidham.

Leah returned to see Dr. Stidham one week after surgery, and four weeks later, she saw audiologist Mindy Schmelzer, AuD., who turned on the processors.

With her implants, says Dr. Stidham, Leah will hear within a normal range. “This is a life-changing procedure, and it’s as close to a miraculous technology as you can get,” she adds. “Without implants, Leah wouldn’t be talking or communicating verbally. She might be attending a residential school for the deaf and only communicating through sign language. With them,” she continues, “she’s taking off amazingly well and will be able to attend a mainstream school.”

“It can be overwhelming dealing with and processing the fact that your baby is essentially deaf and that now she’s going to have these devices put into her head, to allow her to hear,” reflects Casey, an opera singer. “But it’s amazing to see how she’s developed over this past year.” Kim agrees: “It took about two or three months after activation for her to respond, and after a couple of speech therapy appointments, she really started to pay attention, babble, and imitate sounds.” Leah receives regular speech therapy from Michelle Albera, a speech-language pathologist; during the pandemic, sessions are provided virtually (see sidebar below).

“We have a little toy with cards for different songs, and when I sing a song, she gets the correct card. She knows all the tunes!”
— Jihyun Kim, Leah’s mom

Leah’s parents are particularly thrilled with her response to music. “We have a little toy with cards for different songs,” says Kim, “and when I sing a song, she gets the correct card. She knows all the tunes.”

When the COVID-19 pandemic hit last spring, the Cochlear Implant Center was able to quickly transition to virtual speech therapy for all of its patients, having already piloted a telemedicine speech therapy program. The pilot demonstrated that “virtual speech therapy works quite well,” says Dr. Katrina Stidham, “and it even provides some benefits for young children who otherwise have to be driven far from home.”

Leah Kim Casey’s speech-language pathologist, Michelle Albera, who was one of the therapists in the pilot, is also a proponent of speech therapy via telemedicine. “Listening and spoken language therapy involves coaching the parent so that they are doing the actual therapy with their child,” she explains. So when therapy is done virtually, and parents use their own toys, books, and other materials, she says, “it’s easier for them to carry over the strategies they learn into their everyday life with their child.”

To learn more about The Cochlear Implant Center, please call 914.493.4634 or visit westchestermedicalcenter.org/cochlear-implant-center.