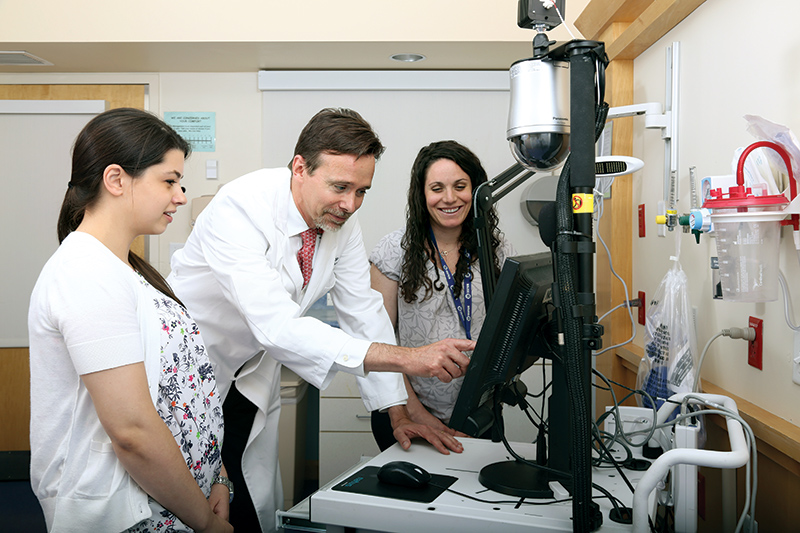 “I thought I was going to be an English teacher,” says Philip Overby, MD. “I like literature and studied English as an undergrad.” After college, he took a job in his hometown, Minneapolis, as a hospital orderly, “just to make some money, and found I enjoyed being with the patients so much that I thought I’d give the sciences a try.”

Dr. Overby, the son of a pediatrician and a nurse, is a Pediatric Neurology Hospitalist, or neurohospitalist, treating children not in a private practice but at Maria Fareri Children’s Hospital, a member of the Westchester Medical Center Health Network. His young patients may have lives that have suddenly changed because of an accident, or they may have chronic neurologic conditions that have worsened. Some with chronic problems may have been admitted because of some other condition, such as pneumonia or gastric problems. The goal, Dr. Overby says, is to deal with the issues as quickly as possible and get children home with the best possible outcome. “It’s a matter of being a part of a larger team within the hospital,” he says. “I work very closely with the pediatric neurosurgeons, neuroradiologists, the general pediatricians, the pediatric ICU, the pediatric oncologists.” He’s been doing this work since 2009 and has been at the Children’s Hospital for almost two years.

Dr. Overby is board certified in epilepsy care, and he is pleased the hospital is expanding and enhancing its epilepsy monitoring program. “Currently, the pediatric ICU is wired to provide 24/7 EEG monitoring for critically ill patients,” he says. There are 12 other beds in the pediatric hospital wired for continuous EEG epilepsy monitoring, and similar wiring is being installed in the neonatal ICU. These EEGs enable doctors to identify seizures and whether medication can control the problem. If not, he says, the EEGs help them, “in conjunction with neurosurgery and neuroradiology,” determine whether surgery is appropriate. They’re also working with the adult neurology group to develop a pediatric stroke program. “Unfortunately,” he says, “kids do have strokes, and they’re not as uncommon as once thought.”

Maria Fareri Children’s Hospital’s Chief of Pediatric Neurology, Ronald I. Jacobson, MD, conceived of the idea of having a full-time attending pediatric neurohospitalist several years ago. “It’s satisfied many different goals,” he says, allowing the focus to be “continuity of inpatient care, so you’re not having different doctors making rounds each day, and it recognizes that inpatient pediatric neurology requires a different set of skills, abilities and knowledge to manage patients with encephalitis, coma, brain tumors, et cetera. This is a different spectrum of diseases than you see in your office.” Timeliness of care is another major factor, he says, and since it is crucial to access as much care as possible as quickly as possible, “having a full-time attending physician in the hospital made a lot of sense.” Strokes in children are much rarer than in adults, he says, but rapid response is crucial for all. “Having a pediatric neurohospitalist also facilitates our teaching role in the hospital, the supervision of residents, and the building of programs.” Dr. Jacobson says. “There is a basic difference evolving now in all parts of medicine between how to practice in an outpatient environment versus in an inpatient setting, where historically they were one, with doctors running back and forth from their offices to the hospital. Now we have a full-time presence in the hospital. That means we aren’t in the position of isolating the continuity of patients from the hospital to follow-up outpatient visits, or the reverse. Dr. Overby has been an invaluable partner.”

It’s not an easy job, and Dr. Overby feels that his liberal arts background has been a help, broadening his way of thinking about human nature. Between undergraduate studies at Kenyon College and medical school at the University of Minnesota, he took some science and literature classes and got a master’s in philosophy at St. John’s College Graduate Institute. “It helped me understand better the origins of natural science and what it can and can’t do, the kinds of questions it can and can’t answer.” He realized that “being a doctor was another way of asking questions about what it is to be a human being. Believe it or not, the most helpful thing I ever studied to understand science better was my grad school study of philosophy, Plato and Aristotle. We’re not so special in the modern world. People have been asking good questions and living thoughtful lives for a long time, and while we like to think we have a privileged historical perspective, studying those guys made me realize nothing could be further from the truth. Having some background in philosophy and also theology helps me to be hopeful. I think that helps families to be hopeful.”

“Being a doctor was another way of asking questions about what it is to be a human being.” – Dr. Overby

Working with children, he says, gives him clearer goals than he could see during a brief period of practicing with adults. “With kids, you restore them to something more normative, you’re trying to not just prolong life, you’re trying to get them back to functioning within their family and in school, to the greatest extent possible. Obviously with kids who have some neurologic impairments, they’re not going to be able to do as much as kids who don’t have those problems, but you can set out the goals, you can sit down with parents and sometimes immediately, sometimes gradually over time, come to a shared understanding of what you’re hoping for with your kid.”

The Westchester resident is a husband and father of three girls, ages 4, 6 and 12. “They’re a real gift,” he says. The couple considers themselves lucky that his wife can be a stay-at-home-mom while the girls are young, he says. With a life filled with work and family, he doesn’t have time for much else, but he says he reads “fairly broadly, I ski, play tennis. I used to write, but I haven’t written anything that’s not scientific for almost ten years, and I hope to one day get back to that.”

Dr. Overby has a particularly good working relationship with the nurses and was recently named a Friend of Nursing by the combined adult and pediatric nursing staff at the hospital. “The real backbone to any well-functioning hospital is the nursing staff,” he says. “The nursing here is as good as or better than any place I’ve been. They tend to be here for a long time, so I think they’re kind of the owners of the culture, they really set the tone.”

Dr. Overby sums up the way he feels his varied education has enriched his outlook: “Science is a great tool, but it’s by no means the final word on who we are or what we’re about, and where life is going.”