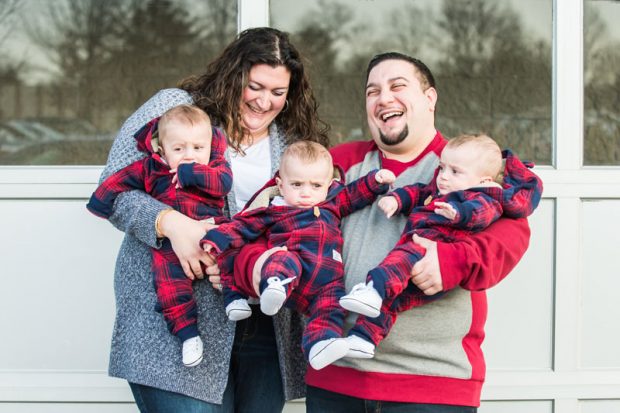 When multiples enter your family, every aspect of your life — the joy, the worries, the diapers! — multiplies.

Remember that Doublemint gum commercial from the ’80s, with the twins frolicking and laughing as the jingle “double your pleasure, double your fun” played in the background? Well, giving birth to — and raising — multiples certainly can be fun, but it’s not without its challenges. The joy of having an “instant family” is offset by sleepless nights, skyrocketing grocery bills and mountains of diapers. Here, two local families share the struggles and rewards they’ve experienced parenting multiples. 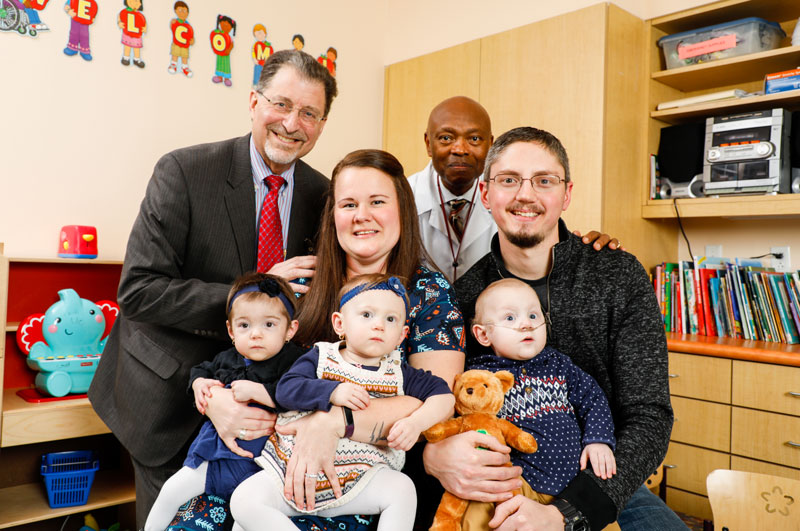 “Going through so many big changes in our life really made us stronger,” says Meaghan Lane, pictured with her family and Andrew Elimian, MD (left), and Edmund LaGamma, MD.

“Life with multiples is amazing, crazy, scary — you name it. But we wouldn’t change it for the world,” says Cuddybackville resident Meaghan Lane, reflecting on her multifaceted experience as the relatively new mother of multiples.

Back in early 2015, Meaghan and her husband, Sam, were thrilled she’d become pregnant, but they were stunned to learn she was carrying quadruplets.

Another plus: Once born, her babies could be whisked immediately down the hall to the Regional Neonatal Intensive Care Unit at the Maria Fareri Children’s Hospital, a member of WMCHealth that is adjacent to WMC, for specialized care.

About six and half months into the pregnancy, Meaghan was diagnosed with HELLP syndrome (Hemolysis, ELevated liver enzymes, Low Platelet count), a variant of preeclampsia, a complication that required immediate delivery via emergency Caesarian. Minutes later, the four babies were born: Dillon (1 lb.), Kevin (1.5 lbs.) and Sophie (1 lb.). At only 11 oz., Aubree was the smallest, having stopped growing at 20 weeks.

Though safely delivered, their young gestational age led to numerous complications, including lung and GI infections. On day three, Kevin passed away, following a stroke and collapsed lung. The other babies were eventually discharged one at a time, with Dillon, the last, leaving the hospital after 199 days under the care of the RNICU staff. “They became like family to us – you gain a family,” says Lane.

“In the NICU, every day is different, when complications arise, it can be very stressful and emotional for new parents,” said Edmund LaGamma, MD, Chief of Neonatal Medicine at Maria Fareri Children’s Hospital. “We strive to help these tiny babies thrive, and we support their parents during challenging times.”

“Dr. LaGamma and his team never gave up on us,” recalls Meaghan. “We’re very grateful to him. We love him.”

Today, the Lanes are local celebrities. “We can’t go anywhere without a crowd,” smiles Meaghan. “People are always so kind, but they wonder how we do it.” For their part, “the babies always put on a show; they love the attention.”

Today, Sophie, Aubree and Dillon continue to thrive with the help of physical and occupational therapies. “Sophie is supersmart; she does things to get us to laugh,” says Lane. “Aubree is sweet but very feisty, and Mr. Dillon is the sweetest and happiest baby you’ll ever meet,” says Lane.

And what they say about the multiples’ bond is certainly the case with the Lane babies. Meaghan says the children have had a close friendship from day one. “They are now very aware of each other and give each other kisses and hugs. We’re blessed with four amazing children: three on Earth and one who watches over us every day.” 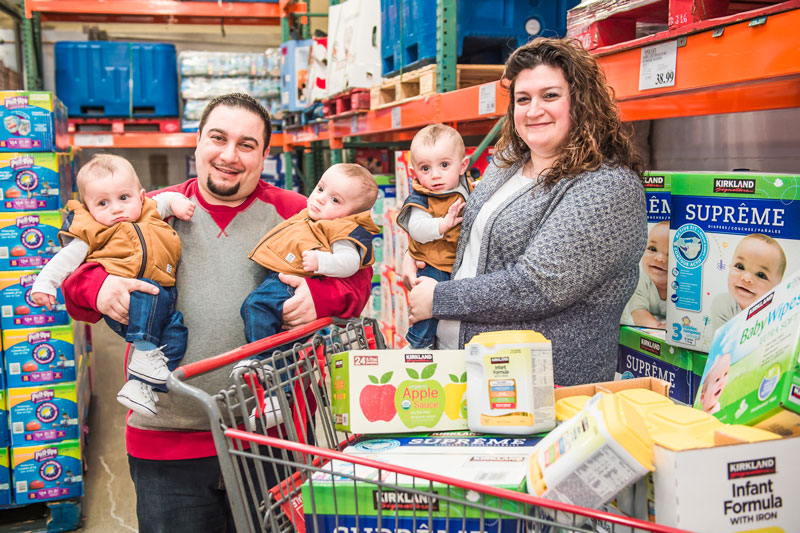 “We love Costco!” says Prandy. “The baby products we use from there have been a huge money saver and convenience, since we can buy everything in bulk.”

When Prandy and Joseph Bonanno learned that triplets were on the way, “Joe nearly passed out,” recalls Prandy Bonanno of Stony Point. “It was a complete shock.”

Three simultaneous new additions to their family meant a whole new life awaited the Bonannos. More than doubling in size also meant leaving their one-bedroom apartment and living with their inlaws as their new home was being built.

Choosing a hospital to deliver their children was easier. “I knew Maria Fareri Children’s Hospital has one of the top NICUs,” says Prandy. “So it was my top choice; they got rave reviews.”

She was monitored by Andrew Elimian, MD, Director of Maternal Fetal Medicine at Westchester Medical Center, who manages the potential risks and complications associated with multiple pregnancies.

Prandy’s pregnancy was uneventful, until a routine doctor’s appointment in month six revealed that preterm labor was imminent. She was sent directly to WMC, where labor was delayed. A week later, the boys were born. “All of the NICU nurses were amazing. It was nothing but a great experience.”

As far as their experience post-triplets, Prandy admits the continuous cycle of feedings and diaper changes was overwhelming at first. “Our life is color-coded now,” she says of the system they use to manage feedings. “Now it’s easier. They’re eating solids, and it’s fun to watch them learn new things and taste new things.”

As far as diaper changes, “Forget about it! We go through a lot of diapers and wipes.” During their regular Costco trips to buy in bulk, “Everyone stops to look at the boys. They get a lot of attention.”

While they command attention collectively, each boy has his own personality. “Dominic is probably my spunkiest and my biggest fighter from day one. Anthony is the biggest mush, and Vincent is my middleman – he’s pretty much content doing anything.”

According to Prandy, “They share a room, and if someone wakes up during naptime, and I sneak them out, in 10 to 15 minutes everybody’s up. They just know someone is missing.”

All things considered, “Having three isn’t as bad as everyone imagines. There are days when I’m convinced they forged a plan to gang up on me. But as long as you have a routine and schedule and stick to it, it’s really easy!”