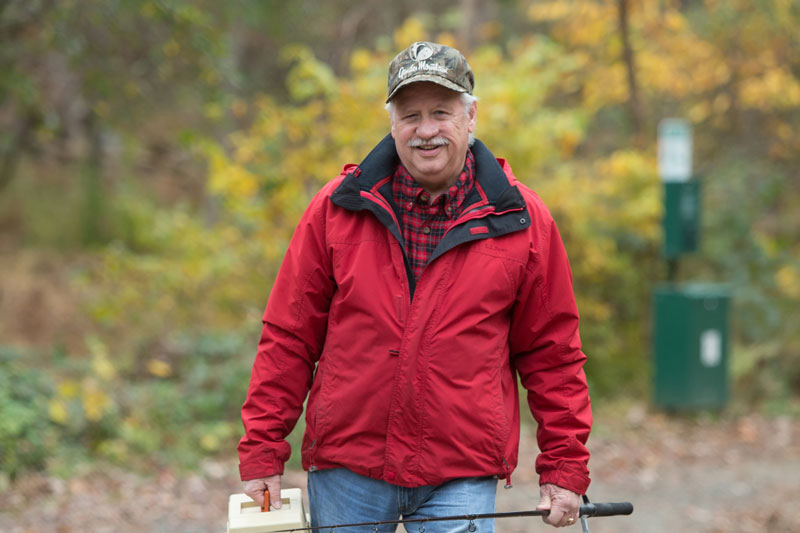 After a diagnosis of a silent hereditary disease, this Vietnam veteran from Long Island went to the experts at Westchester Medical Center.

It was his regular walk, about a mile, from Penn Station to his office on Madison Avenue in Manhattan. But in the fall of 2012, Thomas Gurry, now 70, of Syosset, Long Island, started feeling lightheaded and had difficulty catching his breath on his way to work.

“It started to get progressively worse and felt like someone was hitting me in the chest with a brick,” recalls Gurry, a partner in a data-base marketing firm. “I was having to stop more and more and started passing out.”

An Air Force medic for four years who spent 18 months in the Philippines during the Vietnam War, Gurry thought it was a breathing issue, related to his having smoked for more than 30 years. A Long Island pulmonologist started treating him for COPD, a chronic obstructive pulmonary disease that makes it hard to breathe, but Gurry got increasingly worse. He was referred to a local cardiologist, who diagnosed him with Hypertrophic Cardiomyopathy (HCM), a life-threatening condition and a common cause of heart failure.

Gurry saw Dr. Naidu in the fall of 2016, and an echocardiogram with a pre-specified protocol for this disease confirmed the HCM diagnosis. “I’ve seen a lot of doctors,” says Gurry, also a cancer survivor. “Dr. Naidu was very direct, listened and asked a lot of questions. He was the only one who asked me if I had breathing issues after eating, a sign of this condition,” he says.

“HCM is a type of genetic heart disease,” explains Dr. Naidu. “The problem, however, lies not in the plumbing but in an abnormal thickening in the heart muscle itself.” Those afflicted may experience symptoms like those experienced by Gurry, or they may present in childhood with dizziness or palpitations. Asymptomatic patients can be the most challenging, however, as they can be unaware of their condition, making them susceptible to sudden cardiac death. Indeed, HCM is the most common cause of sudden cardiac arrest in athletes.

In HCM patients, as the muscle grows thicker, the heart can’t fill to capacity, impeding blood circulation and creating obstructions to flow. About two-thirds of HCM patients, including Gurry, have such an obstruction.

Thomas Gurry underwent an alcohol septal ablation procedure last April and was back to fishing in no time.

Gurry was a candidate for an alcohol septal ablation procedure — a less invasive option than open-heart surgery — where the patient is awake and alert. Pure ethanol is injected slowly and selectively into the heart via a catheter in the groin. “This causes a controlled myocardial infarction that kills the abnormal, unnecessary and obstructing muscle, leaving normally functioning muscle alone,” explains Dr. Naidu. “While there is often an immediate benefit, full benefit occurs over three to six months as the infarcted muscle scars down, removing the obstruction to blood flow out of the heart.”

The HCM team weighs the risks and benefits of each procedure to determine which is most appropriate for a patient — alcohol septal ablation or myectomy surgery. “Patients over 60 often have other issues that might make surgery more risky, thereby favoring alcohol septal ablation,” he says. “With those younger than 40, we usually recommend surgery, as the risks go down if you’re younger, and the muscle is usually very massive in those patients.” Between ages 40 and 60, the option recommended depends on the patient’s anatomy, he adds.

Gurry underwent the alcohol septal ablation last April and felt fine within days. “I received excellent care at the hospital,” he says. “The nursing staff in the coronary care unit was very professional and attentive, and they had me in 24-hour e-ICU monitoring.” Gurry responded well to the procedure, and his prognosis is excellent, says Dr. Naidu. “His symptoms have completely resolved, and he should go on to live a normal life.” In fact, he adds, patients often go back to feeling as they might have 10 or 20 years earlier. “They often say they have gotten many years back because the heart can circulate the normal amount of blood. And any medications, like beta blockers, can usually be significantly reduced.”

While Gurry had been told that he had a heart murmur as a teenager, it never really impacted his life. But because he learned that HCM is a genetic condition, he went back through his mother’s old paperwork, where he made a surprising discovery. “We were told that she had a heart condition and emphysema,” he recalls. “But her medical records indicated that she had an enlarged left ventricle, a symptom of HCM.” Because the condition is hereditary, Dr. Naidu recommends that anyone with a family history have an HCM protocol echocardiogram starting at puberty and repeated every two to three years.

“While HCM can’t currently be cured on a genetic level, it can be managed so that patients feel as if they don’t have any disease, which is as good as a cure,” says Dr. Naidu. “This condition used to be thought of as rare but is actually much more common, affecting about one person out of every 300 people,” he continues. “With increased awareness, advanced imaging and greater knowledge of genetics, we’re seeing a much higher frequency of detection.” Dr. Naidu urges anyone with HCM to see a specialist in the condition. “It can make the difference between whether you struggle with heart failure or have a procedure that’s transformative,” he says.

Today Gurry is back to his previously active life — walking to work and enjoying such outdoor pursuits as golf, fishing and hunting. He says he remains grateful for the excellent care he received from the HCM team at Westchester Medical Center.

To learn more about the Hypertrophic Cardiomyopathy program at Westchester Medical Center, call 914.598.7651.