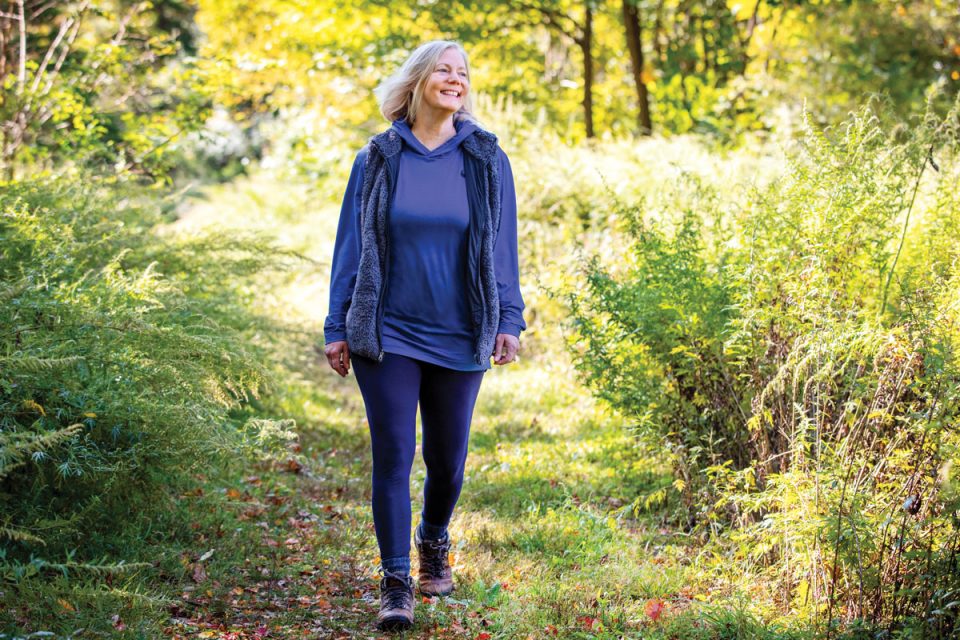 Lisa Beckett qualified for a less-invasive treatment for her esophageal cancer. The procedure, at Good Samaritan Hospital, took only 40 minutes. Photo by John Halpern

A longtime Good Samaritan Hospital patient reflects on her shocking diagnosis of esophageal cancer and how the advanced care she received made her healthy again.

By Deborah Skolnik
As seen in the December 2020 Issue of Advancing Care.

Today, Lisa Beckett is a healthy, active — and cancer-free — 59-year-old.

But a few years ago, the Suffern resident noticed a curious discomfort in her abdominal area. “Having that issue, and knowing I was in my 50s, I said to myself, I guess it’s time for a colonoscopy,” she recalls. Her physician referred her to Vipul Shah, MD, Codirector of the Esophageal and Reflux Center at Good Samaritan Hospital, a member of the Westchester Medical Center Health Network (WMCHealth).

Even before her scheduled appointment, her discomfort intensified. “I immediately went to Dr. Shah’s office, and it turned out I had appendicitis,” she says. After an appendectomy, “I felt so much better; I didn’t think I needed to do anything else,” she shares.

Nevertheless, Dr. Shah urged Beckett to have a colonoscopy. Because of her previous abdominal issues and some heartburn, he also suggested an endoscopy and biopsy. An endoscopy is a procedure in which a flexible tube with a light and camera is inserted through the mouth and throat into the esophagus. This allows the physician to view the esophagus, stomach and upper area of the small intestine. Beckett agreed, and Dr. Shah performed the procedures in a single session, taking biopsies of Beckett’s esophagus as he examined it.

Several days after the procedures, Beckett received a call from Dr. Shah. The news was stunning: The biopsy had revealed two problems. First, Beckett had Barrett’s esophagus, a condition in which the lining of the esophagus becomes damaged by stomach acid and appears a deeper shade of pink representing a change in the cells. More seriously, a small, patchy area of redness in this area turned out to be malignant.

“I was a bit surprised that at her age and being an otherwise very healthy person with no real family history of esophageal disorders, that her pathology came back showing a very, very early form of esophageal cancer,” Dr. Shah recalls. Beckett returned for a second endoscopy and biopsy, which confirmed the diagnosis.

Dr. Shah presented two possible treatment options. The first was an esophagectomy, where a section of the lower esophagus is removed and the stomach is pulled up to reconnect. But because Beckett’s cancer was at an early stage and limited in area, she might qualify for another, less invasive, approach, called an endoscopic mucosal resection, or EMR.

During an EMR, an endoscope fitted with a small cap and rubber band would be inserted down Beckett’s esophagus to the cancerous area. That area, including a couple of layers of the esophagus beneath it, would be suctioned into the cap, sealed off with the rubber band, then cut away. The tissue would then be sent to a pathologist to make sure there was a good margin of cancer-free cells around the cancerous ones, indicating that all the cancer had been removed. Dr. Shah is one of just a few physicians in Rockland County with the expertise to perform this procedure.

“Learn everything you can about the diagnosis and specific cancer, ask questions and seek answers and second opinions; listen to your inner self; take time to process and know who you are as a person, a human, a soul before agreeing to whatever next steps and treatments are presented.” – Lisa Beckett

To confirm Beckett was a candidate for an EMR, Dr. Shah brought her to Good Samaritan Hospital and performed two diagnostic procedures. The first was an endoscopic ultrasound, during which endoscopy and ultrasound are used to look into the layers of the esophageal wall. It indicated Beckett’s cancer was confined to the mucosa, the uppermost lining of the esophagus. Dr. Shah also performed a CAT scan (which uses X-rays and a computer) to confirm that the lymph nodes near Beckett’s esophagus appeared normal. With those confirmations, she was cleared for the procedure

Beckett underwent the EMR at Good Samaritan Hospital. “What I remember most was Dr. Shah’s huge smile and how he shook hands with my husband and said everything was going to be great,” she recalls. Soon after the 40-minute procedure, which was performed under light anesthesia, Beckett was sent home with prescriptions for two acid suppressors to help her esophagus heal. She spent a week recovering and gradually reintroducing solid foods to her diet and then returned to work.

Because Dr. Shah had briefed her on the possible complications of an EMR, Beckett knew she might occasionally experience difficulty swallowing. This would be due to the formation of scar tissue at the site of the tissue removal. Over the next year, Beckett returned to Dr. Shah for four subsequent endoscopic procedures during which he stretched the scar tissue so she could swallow more comfortably. “I reached a point where things seemed to be much better,” she recalls.Dr. Shah agrees: “She’s been doing quite well, without any further trouble swallowing.”

A mother of three, Beckett enjoys reading and hiking. Aside from taking prescription heartburn medication and seeing Dr. Shah annually, she requires no special care.

“My experience with Good Samaritan Hospital was nothing but positive,” she says. “Dr. Shah was so easy to talk to and thorough in asking questions, and he absolutely made me feel comfortable. It was all about care and wanting to know how we could make this a long life and what he could do to contribute to that. And he did.”