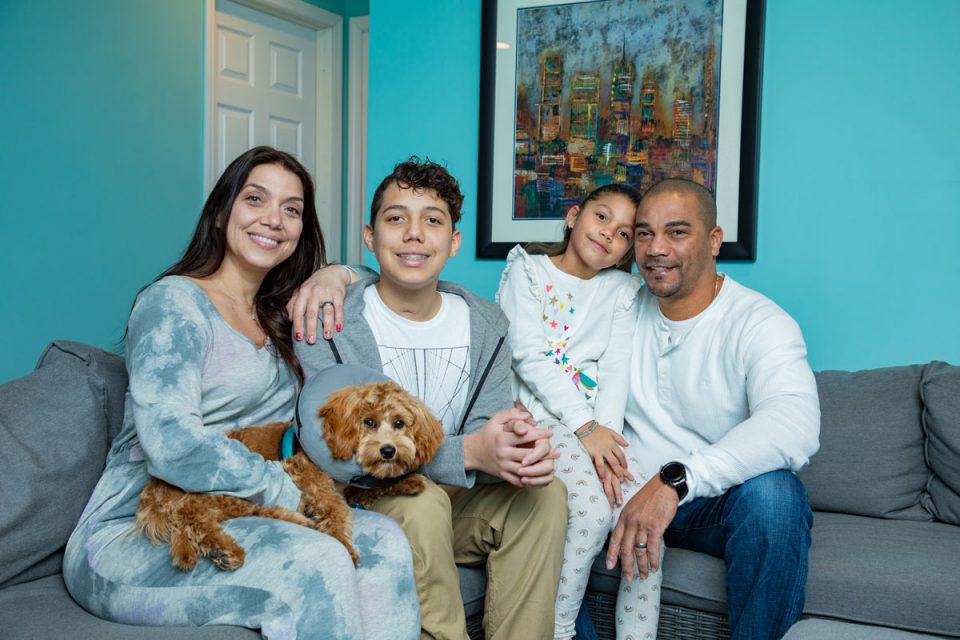 The Magwood family at their Baldwin home. Photo by Kenneth Gabrielsen

A team of specialists at Maria Fareri Children’s Hospital helped a Long Island boy recover from a serious bike accident.

As seen in the May 2021 Issue of Advancing Care.

What started as summer getaway to the Catskills almost ended as every parent’s nightmare. As a pandemic distraction, Baldwin resident Michelle Magwood took her 12-year-old son, Adam, and 6-year-old daughter, Abigail — along with friends — on a Catskills camping trip. The first two days of that late-summer trip were wonderful, says Michelle, until Adam’s friend came running back to the campsite to say there had been an accident.
The friend reported that Adam had been riding his bicycle, hit a bump, was ejected from the bike and appeared to be seriously injured.

“He was unconscious and wasn’t responding to my voice or anyone else’s,” recalls Michelle. “Those were some of the worst minutes of my life.’’

After about 30 minutes, an ambulance arrived and provided emergency care, including the insertion of a breathing tube. A helicopter was then dispatched to take Adam to Maria Fareri Children’s Hospital, in Valhalla, a member of the Westchester Medical Center Health Network (WMCHealth), the region’s only Level 1 Pediatric Trauma Center. A team of critical care specialists cared for Adam during his flight to the hospital.

In addition to head trauma that required neurosurgical evaluation, Adam had a broken arm when he arrived at Maria Fareri Children’s Hospital and was immediately admitted to the pediatric intensive care unit. Under the care of a team of specialists that included pediatric trauma, Adam’s recovery rapidly progressed, but “something wasn’t right,’’ says Michelle. “His breathing was horrible.”

Tali Lando, MD, a pediatric otolaryngologist (an ear, nose and throat specialist) with Maria Fareri Children’s Hospital suspected scarring in Adam’s airway was the cause and received approval from Adam’s parents to perform an emergency tracheostomy.

Within a few days following the procedure, Adam’s airway returned to normal, and within two weeks, the tracheostomy was removed.
“We were able to successfully manage what could have been a very dangerous situation,’’ says Dr. Lando. “His family was very grateful to the entire team.’’

Michelle says that Adam likes to show off his scar to his friends and that he made an animated film about his adventure and sent it to the staff at the hospital as a thank-you.

For Adam’s part, he says he was very relieved that the ordeal did not affect his voice, since he loves to act.

“At first, I thought I was going to die,’’ recalls Adam. “Then, I didn’t know if I was going to be able to speak again, but now I’m fine. It was pretty traumatic. But it was such good care at the hospital. It was like a miracle. The hospital was really nice. You could tell they really care.’’

Adam’s Tips for Prevention and Recovery

To make an appointment at any of our 11 Advanced ENT Services locations across the Hudson Valley, please call 914.693.7636 or visit advancedent.org.