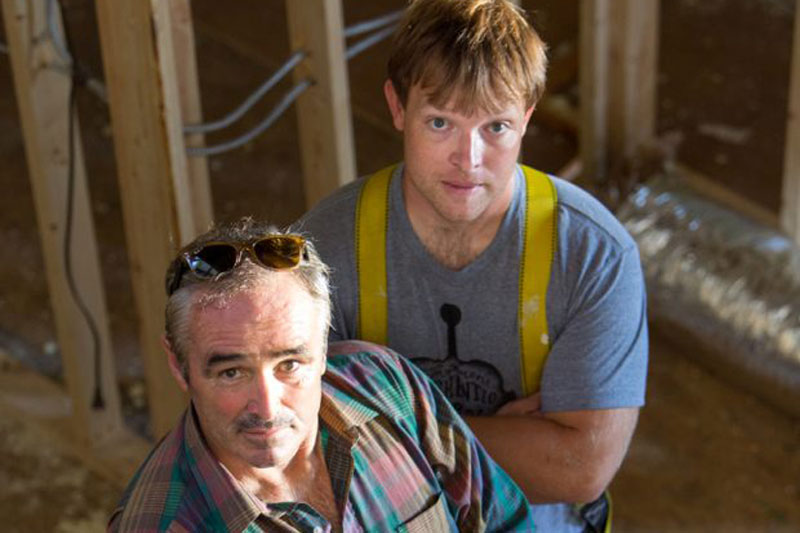 A Red Hook man who suffered a stroke is still enjoying an active life thanks to his co-workers and the Emergency Medicine team at MidHudson Regional Hospital.

It was a routine July day at work this past summer for Christopher Gilbert, 61, of Red Hook—until it wasn’t. A builder, Gilbert recalls being at a construction site with members of his crew and then all of a sudden being asked for his cellphone, so they could dial 911.

“When I asked why, they told me I looked odd—I wasn’t able to communicate or walk, and my left eye looked like it was blind and gazing off into space,” recalls Gilbert. “When I tried to tell them I was fine, my response came out as gibberish. And when I tried to show them I could walk to my car, I couldn’t. It was all very confusing.”

By the time Gilbert decided something was indeed wrong, an ambulance had arrived, and he was taken to MidHudson Regional Hospital (MHRH), a member of the Westchester Medical Center Health Network (WMCHealth). “I still felt like they were overreacting; I didn’t realize how serious this was,” he said.

Gilbert’s situation was indeed quite serious: As the ambulance had called in a “code stroke” to MidHudson Regional in preparation for Gilbert’s arrival, Mark Papish, MD, Associate Director of Emergency Medicine at MidHudson Regional Hospital and recently honored as the 2016 Physician of Recognition by the Dutchess County EMS Council, was at the ready.  Sol Mora, MD, a neurologist for more than 30 years, joined him. The “code stroke” enables hospital staff to mobilize the resources needed in advance, including having a neurologist standing by, a set-up for blood to be drawn and ensuring that the CT scanner was available for immediate use.

Once at the hospital, a CT scan confirmed the initial stroke diagnosis and revealed a blockage of a blood vessel in his brain. A stroke is the closure of a blood vessel on the way to, or in the brain. “If you close a blood vessel, no blood flows through it, and the brain or tissue beyond the clot dies,” said Dr. Mora.

Certain people have strokes because of high blood pressure, but in this case, Dr. Papish and Dr. Mora noted Gilbert’s stroke was caused by a history of arrhythmia, or irregular heartbeat, called atrial fibrillation, that caused the clot to form in his heart and travel to his brain, blocking the flow of blood. “Untreated,” Dr. Papish added, “atrial fibrillation increases the risk of stroke by 5-17 times.” 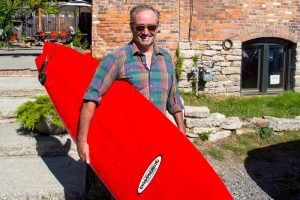 “Stroke is a time-sensitive issue,” Dr. Papish continued. “If you develop sudden confusion or problems moving an arm or leg, or a weakness in the face, don’t wait at home. Call an ambulance and get to a hospital immediately.” Adds Dr. Mora, “Strokes and heart attacks go to the top of the queue and have to be treated quickly for the best hope of reversing symptoms. Some people wait hours before coming into the hospital hoping their symptoms will go away—and by then, it can be too late.”

Fortunately, thanks in part to the quick thinking of his coworkers, Gilbert arrived at the hospital within the critical three-hour time frame from stroke onset, in order to be eligible to receive Tissue Plasminogen Activator, or tPA, the “gold standard” in stroke treatment.

Beginning in wide use about a decade ago, tPA is a compound that activates plasma to break up or dissolve blood clots in arteries and improves blood flow to the part of the brain being deprived of it, says Dr. Mora. Administered intravenously, this treatment immediately started to liquefy Gilbert’s clot, leading to a dramatic reversal of his symptoms.  Once at the hospital, the ideal “door-to-needle time” — or insertion of the IV with tPA — is less than one hour, says Dr. Papish. “For this patient, the time was about 40 minutes,” he says.

Gilbert was then sent by helicopter to Westchester Medical Center, the flagship of WMCHealth. The doctor who admitted him and saw him talking and walking couldn’t believe he was the same patient whose records had shown such a major blockage in his CT scan. After a hospital stay of several days for observation and monitoring, Gilbert was released, fully recovered.

Of all of the patients he sees each year who qualify for tPA, Dr. Mora estimates that only a small percentage of those with such a major blockage  recover so completely. “When I saw the other stroke patients, I realized how lucky I was,” says Gilbert.

“Without tPA, says Dr. Papish, he might have ended up in a nursing home for the rest of his life,” said Dr. Papish. “Stroke is such a devastating illness, and one of the leading causes of permanent disability.”

Today, as before his stroke, Gilbert continues to be very active physically, playing ice hockey, skiing, snowboarding, mountain climbing and biking. Because he is now on blood thinners, to prevent future clots, he has been advised to be extra cautious about avoiding injuries to his head and wears the appropriate protective helmet for each sport.

“If you’re going to have a stroke, you want to have it around these guys at MidHudson, because they really know how to deal with it,” Gilbert said. “I’m immensely thankful for the excellent care I received there.”

Knowing the Signs of a Stroke

According to the American Stroke Association, the easiest way to remember the signs of a stroke and what to do if you think someone is having a stroke is to use the F.A.S.T acronym.

Face drooping: Is one side of the face drooping or is it numb? Ask the person to smile. Is the smile uneven?

Arm weakness:  Is one arm weak or numb? Can the person raise both arms? Does one arm drift downward?

Speech difficulty:  Is speech slurred or is the person hard to understand? Can the person repeat a simple sentence correctly?

Time to call 9-1-1: If any of these symptoms are present, even if they go away, call 9-1-1 and get this person to the hospital immediately. Make note of when the first symptoms occurred.