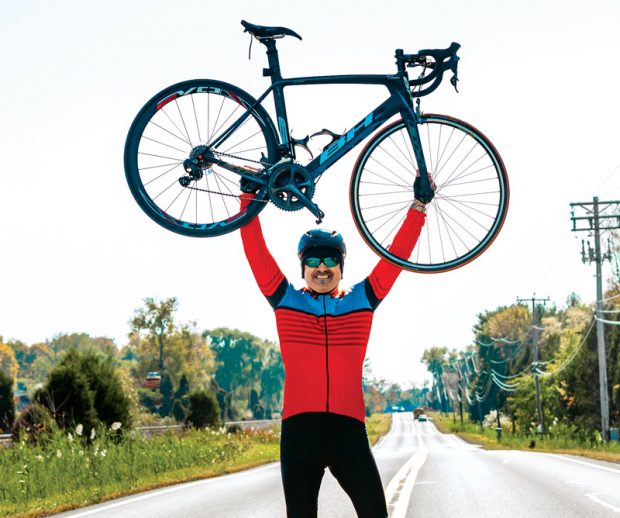 The medical knowledge of his fellow cyclists, paired with top-tier care at HealthAlliance Hospital, helped save Oscar Hernandez’s life.

For the avid cyclists of Woodstock, Thursday evenings mean one thing: a scenic ride through the hills, organized by Overlook Bicycles. On August 2, 2018, two riders who’d noticed each other in passing exited their cars at the same time: Oscar Hernandez of Saugerties and Nicholas Varga, an ultrasound technologist at HealthAlliance Hospitals, members of the Westchester Medical Center Health Network (WMCHealth).

“I remember that I waved, and he waved back,” says Varga, who’d planned to go to his night shift at HealthAlliance after his ride. When they started the 30-mile journey, neither had any clue they would interact further.

Hernandez, who works in the service industry, rides with the group in rain, snow or shine. “I’m in better shape now at 53 than I was at 20,” he says. He also enjoys hiking, canoeing and white-water rafting; he swore off red meat and tobacco decades ago. “For me, life is outside,” he says.

Toward the end of the ride, Varga had ascended a small hill and was chatting with others at the summit. Hernandez hung farther back, struggling to climb. He was later told that he said, “I feel tired,” and suddenly fell over. A woman, cycling near Hernandez, braked to help. “He was not moving, looked pale and felt cold,” Hernandez’s wife, Carla, recounts. Another cyclist dialed 911.

At the hilltop, Varga heard shouts: “‘There’s been a crash! Someone went down!’ Which I thought was strange, because it’s unusual to crash uphill. Then someone else called out, ‘He collapsed like he had a heart attack.’”

Varga sprinted down the hill to check Hernandez for a pulse. Failing to detect one, he began CPR. Although he had worked as an emergency medical technician, Varga says he never expected to perform CPR on a fellow cyclist in cardiac arrest. “Luckily, my training took over, and I didn’t skip a beat — no pun intended,” says Varga, who was assisted by another cyclist. Two minutes later, Varga recalls, Woodstock police arrived with an AED, or defibrillator, and delivered the shock that restarted Hernandez’s heart. Woodstock medics arrived almost immediately and detected a pulse: “a good, normal sinus rhythm,” Varga says, recalling his relief. The ambulance brought Hernandez to the Emergency Department at HealthAlliance Hospital: Broadway Campus; Varga arrived for work shortly after.

“Mr. Hernandez appeared in great physical shape, so for him to suffer such a serious sudden cardiac event was unusual,” says Veronica Dougherty, RN, Clinical Coordinator for the Emergency Department. “Luckily, with the quick response at the scene, CPR and proper use of the AED, we were able to get his heart working quickly. When he arrived in the ED, he was not responding to voice or pain and the concern shifted to preserving brain function while his body healed.” 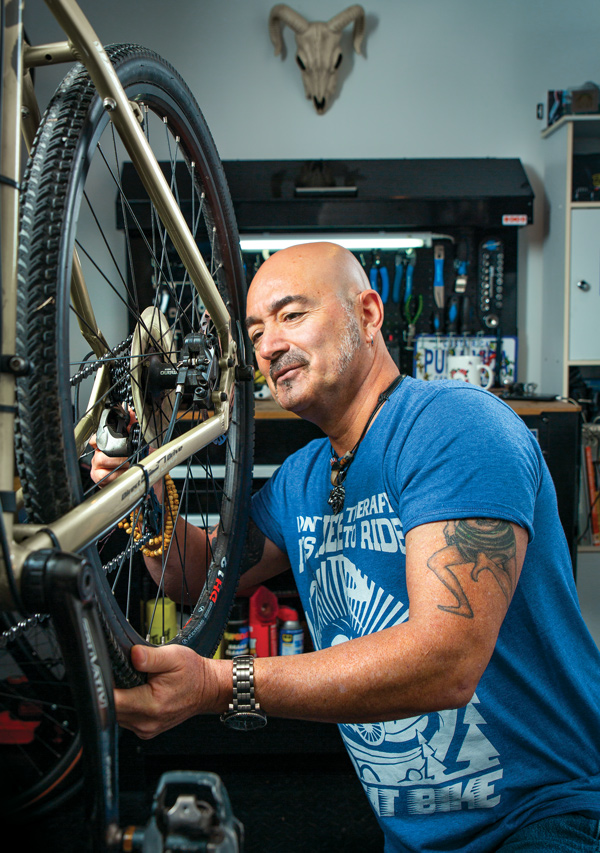 “I go to the gym five days a week, which is fantastic, mentally and physically,” says Oscar Hernandez of Saugerties. “Now every exercise is my favorite, because I’m able to do it. Every spoonful tastes fantastic.”

Matthew Stupple, MD, an emergency-medicine specialist at HealthAlliance Hospital: Broadway Campus, had to make some quick decisions. “Oscar had his pulse and blood pressure back, but it was obvious he had to go on a breathing tube to assist respiration,” he says.

The clinical team started him on a hypothermia (cooling) protocol, lowering his core temperature to around 90 degrees, to suppress inflammation and reduce the body’s demand for oxygen. Hernandez also received medication for ventricular fibrillation, the irregular rhythm triggered that caused his “V-fib arrest” and collapse.

It was clear that he needed to be taken to Westchester Medical Center, the flagship of WMCHealth, for an advanced procedure to investigate and treat the cause of the cardiac arrest.

He remained sedated during a cardiac catheterization at Westchester Medical Center, where testing revealed two blood clots almost completely blocking the left anterior descending (LAD) coronary artery, which feeds blood to the main pumping chamber of the heart. That kind of blockage is so serious, it’s often called “the widowmaker.”

Interventional cardiologist Srihari S. Naidu, MD, then implanted one long stent, reopening the vessel and restoring blood flow. When Hernandez woke up, he looked around and asked his wife, Carla what had happened.

“She said, ‘Oscar, you just had a heart attack.’ I felt like I’d been hit with a hammer on my head,” Hernandez recalls. “My first reaction was, ‘I can’t believe it!’ My second reaction was, ‘What’s going to happen to me? Will the doctors say I have to spend the rest of my life indoors?’ I can’t live like that.”

The good news was that his heart muscle remained undamaged, and he was otherwise in excellent physical condition. After some rest, he could ease back into exercise and start riding his bike again.

“Music sounds like never before,” says Hernandez of his new lease on life. “My Scotch tastes like honey. And I want to reconnect with all my friends.” To that end, in September, Oscar and Carla hosted an “It’s great to be alive!” party. They invited all the riders, including Varga, to celebrate the stars that had aligned the evening of August 2.

“It’s very rare — I would say less than 5 percent of the time — that someone has an out-of-hospital cardiac arrest and recovers fully,” says Dr. Stupple. “It was Nick’s good CPR, the police arriving quickly with the defibrillator and Oscar’s being fit and healthy that allowed him to pull through.”

To learn more about the WMCHealth Heart & Vascular Institute at HealthAlliance Hospital, call 845.339.3663.

0
Do I need to worry about carbon-monoxide poisoning when heating my home?
WMCHealth Marks Cardiac Care Milestone