Friends Through Thick and Thin 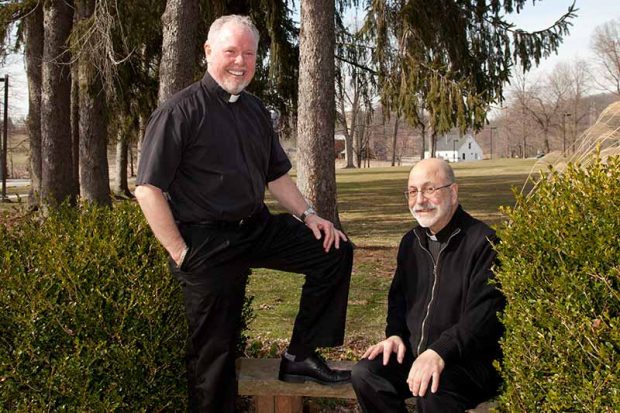 Little did Father Michael Keane know when he visited his friend Father Jack Arlotta, following quadruple bypass surgery, that only two weeks later he would be recovering from the very same surgery, in the very same ICU bed.

The two friends, both Catholic priests, had their surgeries performed by Chirag Badami, MD, and Bruce Toporoff, MD, at Good Samaritan Hospital, a member of the Westchester Medical Center Health Network (WMCHealth) on October 12 and October 28, 2016, respectively. Another shared similarity: The exceptional treatment both men received enabled them to return directly home, rather than be admitted to a rehabilitation facility.

Reflecting on the experience, Fr. Keane, 55, laughs and says, “It was contagious! Yes, that was the joke: When I went to visit Jack the day after his bypass surgery, we said that he gave it to me.”

Fr. Arlotta, 66, learned he needed bypass surgery during routine followup tests in March, two years after the implantation of stents, while Fr. Keane was asymptomatic until experiencing a mild heart attack on October 25, yet their operations were remarkably similar.

“Both men had four blockages in coronary arteries that required four bypasses, and both surgeries were completed with two arterial grafts, two vein grafts and special plating,” says Dr. Badami. Traditional bypass surgery commonly involves one graft from the left internal mammary artery and three vein grafts from the leg. “Both recovered quickly, and we were able to get them back to work in time for their Christmas services at their churches, which was a big deal for them. Maybe there was a little divine intervention,” he adds with a chuckle.

Fr. Keane is the priest at Church of St. Anastasia in Harriman, and Fr. Arlotta is at St. Stephen the First Martyr Parish in Warwick. They met 30 years ago at St. Joseph’s Seminary in Yonkers. “We lived on the same hall during seminary school, and I served Mike’s first mass when he was ordained in 1990, two years before I was ordained,” says Fr. Arlotta. “Being ordained is a special moment, and you ask your friends to help serve mass, like grown-up altar boys.”

Both priests also report enjoying the work they do with their churches’ religiouseducation programs. “[I received] so many cards from the kids in the program when I was in the hospital,” Fr. Keane says.

Both men were in good physical condition prior to bypass surgery, and are aware of the importance of regular checkups. Fr. Keane had occasional shortness of breath and slight discomfort but says, “I never expected this. I was on the way to the gym when I realized my chest pains were more than indigestion. They gave me nitroglycerin in the ambulance, and when I arrived at the hospital, they found a 75 percent blockage. With my healthy lifestyle, they said it must just be in my genes.” Following surgery, he recovered at his sister’s home in Pennsylvania. “I’m really grateful to my family, and Dr. Badami couldn’t have been kinder. The nurses at Good Samaritan were absolutely outstanding, too. I received great care.” 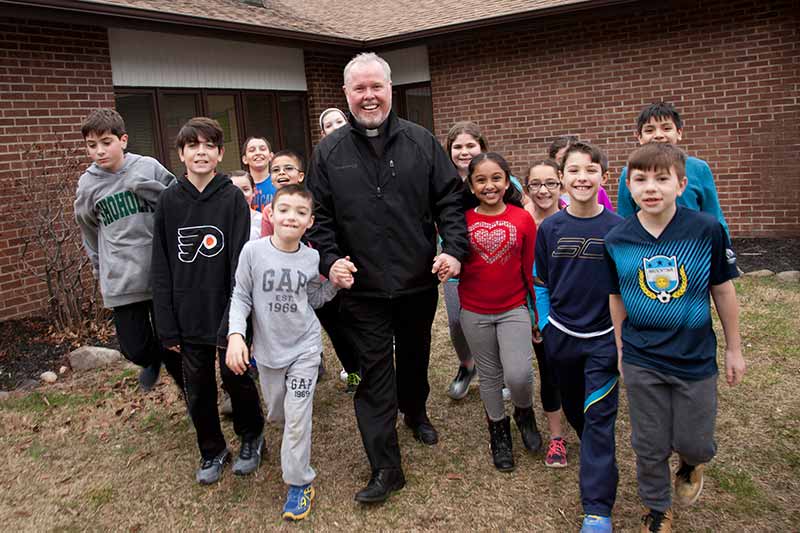 Fr. Arlotta echoes his friend’s sentiments, saying, “The care was superb. Everyone treated me very well, respectfully. I’d tell anyone who has the same procedure to listen to your body, but don’t listen to your head,” he says. “You want to do things as you did beforehand, but you have to allow yourself to heal.”

Fr. Keane agrees. “At first, I thought I’d never get better, but by Thanksgiving, I started walking slowly on the treadmill and doing gradual weight-resistance exercises.”

When not busy working, Fr. Arlotta enjoys “all that Orange County has to offer, including the many opportunities for hiking, dining, music, art galleries and other activities.” An avid reader, he devours “just about anything I can get my hands on — professional materials, history books, intrigue. I read James Patterson and the like.”

In his downtime, Fr. Keane cruises around in his 1961 Roman-red Chevy Corvette while listening to classic rock. A gym rat for the past 34 years, he’s worked out six days a week, barely missing a day, and 14 weeks after surgery, he was going faster on the treadmill than ever. “Usually, I did 4.0 [mph], but now I’m sometimes up to 4.4 or 4.5, and I’m doing more cardio versus more weight resistance.”

“One thing I really missed this year, though, were New York Giants games,” he admits. “I always get season tickets and love tailgating. I missed four home games, but I’ll be back next year!”

Pictured above: Father Michael Keane (left) and Father Jack Arlotta are both doing well six months after their bypass surgeries.

Heart Disease: What to Look for & What to Do

Most know the classic heart attack symptoms — chest pain or pain/pressure that travels down the left arm or shoulder. But there are non-specific signals, too, such as shortness of breath during normal activity or chest pain that occurs during exertion and subsides when you are resting. “Some don’t feel chest pain with a heart attack,” Dr. Badami says. “A diabetic, for instance, may feel nauseated, short of breath or have stomach pain. One key is that symptoms occur when you’re exerting yourself and are relieved when you relax.”

He recommends regular checkups, especially after 50 — or earlier, closer to age 40, if you have a family history of heart problems. Your primary-care physician can perform routine EKGs and refer you to a cardiologist if there are abnormalities. “You can maintain a healthy diet, exercise, don’t smoke, keep your blood pressure under control — but you cannot control heredity and anatomy. No one is immune: Heart disease is the number-one reason for healthcare admissions in America. Regular checkups are the most important thing you can do.”