Going The Distance For Patients 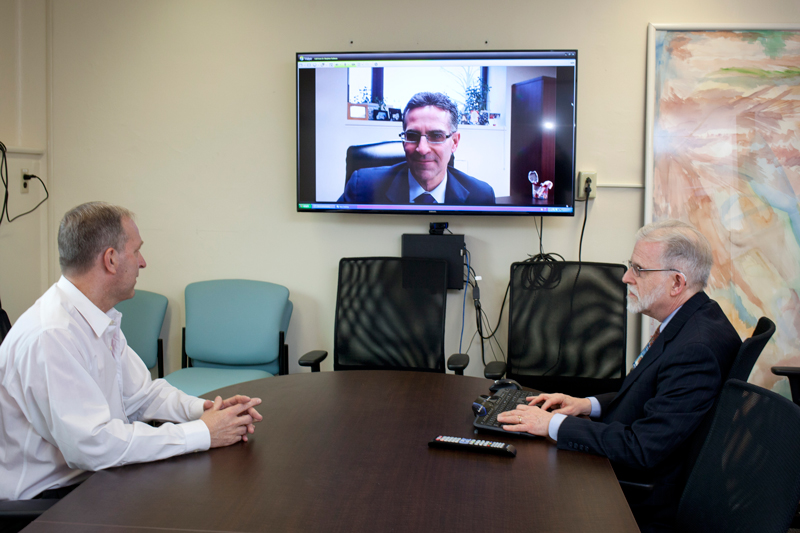 Thanks to WMCHealth’s newest innovation — eHealth — top-notch mental healthcare is just a call away.

At MidHudson Regional Hospital’s behavioral health clinic, ‘patient screening’ has taken on a whole new meaning. To begin the process of receiving care, clients have an office visit with a psychotherapist or social worker for talk therapy. Before leaving, they also see a psychiatrist for medication management. That second consultation is face-to-face and intimate—even though the doctor is an hour away. How is that possible? The psychiatrist conferences in, using streaming video technology.

Welcome to Telepsychiatry, an exciting breakthrough in delivering behavioral health care to people in areas where psychiatrists are scarce. Instead of making either the patient or physician travel a long distance for an appointment, the two connect via a computer or other means of teleconferencing. MidHudson Regional Hospital, a Member of the Westchester Medical Center Health Network (WMCHealth), is the leading provider of this type of treatment in the Hudson Valley.

“It’s a way to leverage technology to provide outstanding care to the entire Hudson Valley,” says Eric Amoh, Senior Vice President of Clinical Services for Westchester Medical Center, the flagship of WMCHealth. “We are happy to be the first facility in New York, other than our state’s own Office of Mental Health, to be offering it.”Before this past April, when MidHudson’s behavioral health clinic began offering Telepsychiatry, it was challenging to coordinate client treatment with clinicians who provide care at both Westchester Medical Center in Valhalla and MidHudson Regional Hospital in Poughkeepsie and would travel between the campuses. 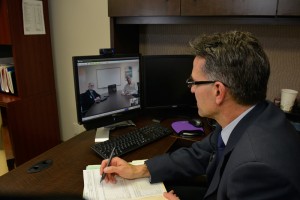 Stephen Ferrando, MD conducts a virtual session from the Behavioral Health Center on the Valhalla campus with (above) Kenneth Oclatis, MD, Director of Outpatient Mental Health Services and Special Programs at MidHudson Regional Hospital, and a patient on the Pougkeepsie campus.

“Patients would frequently cancel their visits with their therapists if there wasn’t going to be a psychiatrist on site at the clinic that day to review their medication,” explains Corey Scurlock, MD, Medical Director of WMCeHealth. “Many times, these cancellations would occur with little or no notice,” says Cheryl Cafone, Senior Director of Nursing for WMCeHealth. This would  make it difficult for those slots to be reassigned and waste a therapist’s valuable time.”

With Telepsychiatry, there are no longer lengthy waits at the clinic to see a psychiatrist, and patients find that there’s a better flow between the different aspects of their treatment.
“After the talk-therapy part of a patient’s visit is over, their therapist may sit in on the initial part of the on-screen meeting with the psychiatrist,” says Stephen J. Ferrando, MD, Director of Psychiatry at Westchester Medical Center. “It’s very helpful to have that three-way check in where we get a little bit of extra interaction we wouldn’t get in a regular office visit.”
For the psychiatrists, Telepsychiatry is hugely advantageous. They can now see as many as four additional patients in the time they’d normally spend shuttling back and forth from Valhalla to Poughkeepsie.

Patient acceptance of Telepsychiatry has been positive.  “The reception to the new mode of delivery has just been incredible,” says Amoh. “No-shows and cancellations, so common before, have become nearly nonexistent.”

Dr. Ferrando has received great feedback as well. “Patients will sometimes say ‘I had my doubts in the beginning and I was skeptical, but now I don’t even notice that we’re teleconferencing. I feel like we’re in the same room,’ ” he says.

While everyone appreciates the convenience Telepsychiatry offers, Amoh and his team have also gone to great lengths to ensure that doctor-patient videoconferences are both high quality (no frozen frames and sound blips) and conducted over connections that are private and secure.

Additionally, medication management has been carefully structured so patients are spared logistical challenges. Should a psychiatrist decide that a medication adjustment is in order, the prescription is sent electronically to the patient’s pharmacy of choice.  If the pharmacy requires a hard copy of the prescriptions (as is the case for certain controlled substances), Amoh notes there is a courier who will drive it over and deliver it.

Psychiatrists in training at Westchester Medical Center are likewise being trained to approach Telepsychiatry without awkwardness or trepidation, adds Dr. Ferrando. “They conduct video conferences under supervision, so they become used to the technology from the outset,” he says.

In the future, Amoh envisions Telepsychiatry expanding far beyond the clinic. “I’d like to see it integrated into inpatient services, too,” he says. “Sometimes we’ll get a patient who has come to us for a heart problem, but is also suffering from depression. Or an asthmatic will come to us for a breathing issue, but could benefit from counseling to reduce stress. There’s a tremendous need for behavioral health services in other environments, and this technology makes it significantly easier to meet that need.”

Telepsychiatry by the Numbers