Healing at Her Own Hospital 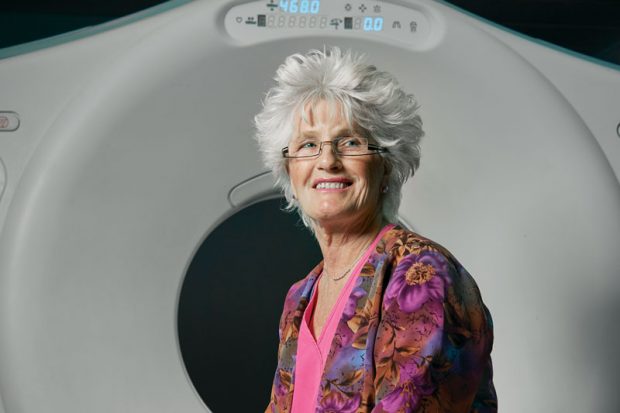 Every day is different; that’s why I love my job,” says Lori Lade, reflecting on her work as an X-ray technician at St. Anthony Community Hospital, a member of the Westchester Medical Center Health Network (WMCHealth). “Even after 30 years, I still find it interesting and challenging.”

Over those three decades with the hospital’s radiology department, the 66-year-old Warwick resident has made compassionate care a priority: greeting patients warmly, explaining procedures, encouraging questions and offering reassurance. Lade says she takes special interest in helping trauma patients receive the empathy and support they need.

Her career also has reminded her to safeguard her own health. With a deep family history of gynecological cancer — ovarian, uterine and cervical — Lade was diligent about getting annual checkups.

In 2014, Lade received potentially concerning, though inconclusive, results following a blood test to detect early signs of ovarian cancer. The follow-up abdominal and pelvic CT scan did not diagnose her condition because the image was masked by advanced abdominal changes caused by diverticulitis. An abdominal laparoscopy was ordered and showed the presence of malignant cells of ovarian origin in the abdomen and pelvis. During surgery to remove her ovaries, uterus and nearby lymph nodes, surgeons detected scar tissue, called surface adhesions, in the bowels, which gave them pause. Further testing revealed the ovarian cancer had spread “like a veil” over her adjacent organs. This kind of cancer, known as serous carcinoma, has such low spatial resolution that it eludes diagnostic imaging tests such as CT scans.

Lidia Koulova, MD, PhD, medical oncologist at St. Anthony, says Lade’s serous cancer was classified as Stage 3, since it had spread in her body locally, to the lining of her bowel and abdomen.

“It was not confined to its organ of origin, the ovary, but it hadn’t become a distant metastatic disease. Ovarian cancer can be difficult to recognize early on. Initial symptoms may be vague, such as abdominal pain or bowel discomfort; a CT scan may only hint of problems in the abdominal cavity or even a pelvic mass.”

Lade then began preventative chemotherapy. “The aim was to further diminish the possibility of residual disease, kill the tumor and suppress the spread of further disease,” Dr. Koulova says. “This is a hands-on management. The infusion treatment is given by licensed nurses, supervised closely by physicians, and we proactively manage side effects, so they do not interfere with the patient’s well-being.”

And what better place than the Infusion Center at St. Anthony – cancer care at the highest level, just two blocks from Lade’s home?

“I went in nervous and afraid, but I knew and trusted my coworkers,” Lade says. “I told them: ‘Keep an eye on me; I react to everything.’ Whenever my blood pressure went up, or I turned bright red, they were on it immediately. They were so attentive and caring.”

But Dr. Koulova cites an additional reason for treatment close to home.

“Many patients think if they don’t travel to New York City, they will not get appropriate high-level treatment, which is not the case,” Dr. Koulova says. “In fact, treatment, diagnosis and follow-up for cancer ideally should be done locally. If the patient has to travel two hours back and forth, it opens the possibility to infections, exposure and negative environmental factors.”

The cutting-edge cancer treatment at St. Anthony follows a two-pronged approach. First comes testing the cancerous tumor for the presence of genetic and molecular alterations, known as somatic testing. Each tumor has a unique signature in terms of how it mutates and spreads, and even how sensitive it is to treatment. Dr. Koulova used this information to help set the course for Lade’s treatment. Then, upon completion of chemotherapy, Dr. Koulova referred Lade for a consultation with a medical geneticist to search for genetic predisposition to cancer. 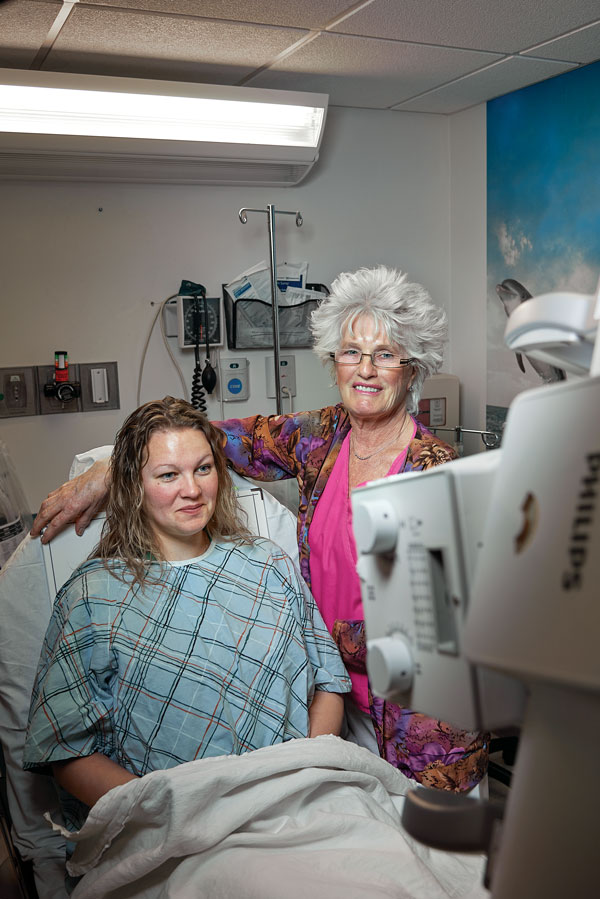 Lori Lade is back to doing what she loves, working as an X-ray technician at St. Anthony Community Hospital.

“People with ovarian cancer may be at increased risk for gynecologic, colon or pancreatic cancer,” Dr. Koulova says. “Lori turned out to be negative for these predispositions, but had this not been the case, we would have increased the frequency of her supervision and surveillance.”

Dr. Koulova now sees Lade every three to six months. She says that Lade’s positive outlook – coupled with her healthy lifestyle – contributes to her health.

“Most tumors are hormonally activated, and hormones like estrogen can stimulate ovarian tumor cells,” she says. “To keep these levels at bay, it’s important to maintain a lean body weight, healthy diet and some level of physical activity.”

For Lade, her healthy lifestyle also meant being able to resume the career she loves. She says her experience as a patient also has enhanced the care she gives.

Outside of work, Lade enjoys spending time with her daughter, which is especially meaningful because Lade’s husband died of cancer 10 years ago.

“I think your outlook on life affects how you experience cancer and chemotherapy,” Lade says. “Some give up. My attitude is that I enjoy life, and I want to live it.”

Chemotherapy isn’t always the answer. For patients with recurring ovarian cancers that don’t respond to chemotherapy, new hope has emerged in the form of PARP inhibitors. This targeted therapy disables the enzyme (PARP) that springs to action to restore tumor cells under attack.

“Chemotherapy tries to disrupt the DNA of tumor cells, but the tumor cells fight back to repair themselves,” says St. Anthony oncologist Dr. Lidia Koulova. “PARP inhibitors block this repair, so the cell cannot survive. After they’re damaged, they perish.”

PARP therapy is effective for patients of all ages – including a 92-year-old woman thriving under Dr. Koulova’s care. “It’s a glimpse of understanding a hope for the best outcome,” she says.

0
What should I do if my child is being bullied — or is the bully?
Westchester Medical Center and Maria Fareri Children’s Hospital Awarded Reverification of Top Level trauma Status