Heart Health to the Max 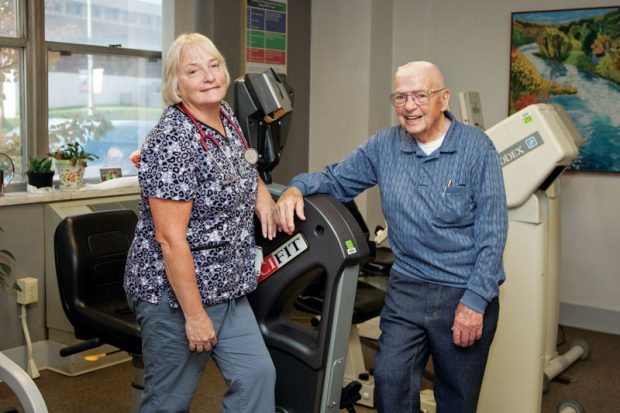 According to the 92-year-old Saugerties resident, it’s more than just good luck and good genes that keep him so healthy and energetic. Ask him how he’s still able to show up for family celebrations, and he’ll tell you it’s because he regularly shows up somewhere else: the cardiac rehabilitation center at HealthAlliance Hospital: Broadway Campus, a member of the Westchester Medical Center Health Network (WMCHealth). For more than a decade, he’s been one of the center’s most faithful clients, visiting every few days for hour-long workouts. Without its caring staff and carefully monitored exercise programs, “I doubt I’d be here today,” he says.

Growing strong after a scare

It was a frightening cardiac event that turned Benson into an exercise fanatic. Ten years ago, at age 81, he underwent a double bypass and an aortic valve replacement, and after a five-day inpatient stay, recovered at home for a month.

The next part of his journey began at  HealthAlliance’s cardiac rehabilitation program in Kingston, the only such facility in Ulster County at the time. Benson was impressed by what he found there: a thoughtfully curated selection of gym equipment, plus highly trained staffers to guide, monitor and educate him.

Careful planning goes into each client’s experience, confirms Sally Gibbs, one of two registered nurses who supervise the center. (Its clinical coordinator is a physical therapist specializing in cardiac rehabilitation.) “We are here five days a week,” Gibbs says, making it easy to schedule a visit.

Clients not only grow more fit, they grow more knowledgeable about self-care and healthy habits, as well. Those new to the program benefit from group-exercise classes and lectures on health-related topics, such as exercising at home and reading food labels. There’s also a library of DVDs on subjects that range from nutrition to stress management. A dietitian visits monthly and is “also available for one-on-one consultation if the patient desires it,” Gibbs adds.

Benson received a workout regimen specifically designed to build his strength and help restore his cardiovascular system to its peak function. At each visit, he wore a device to track his heart rate and heart rhythm, which were monitored by a nurse to ensure he remained within safe limits. “When I first went there, I could hardly do anything,” Benson recalls. But gradually, he began to notice that his strength and endurance were returning, even surpassing their former limits. “That’s what keeps me going,” he says. 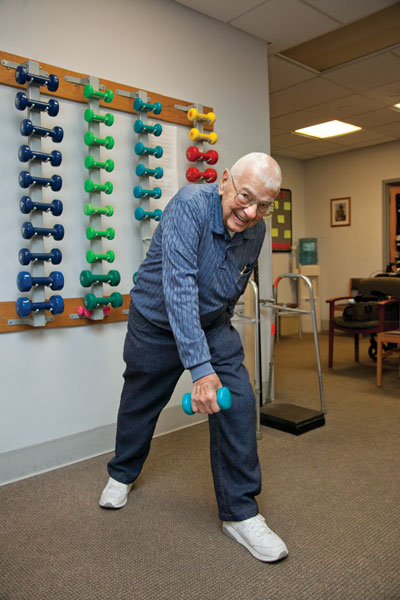 From rehab patient to regular

After visiting the center for several months, Benson’s prescribed course of rehab came to a close. But he was so impressed with how his new exercise regimen had boosted his well-being, he decided to continue as a client. Three days a week, Benson makes his way to the center for an hour-long workout. Though he no longer wears a monitor as he exercises, he’s still carefully tracked. “As soon as you walk in, they weigh you and take your blood pressure,” he shares. Then he tackles a set of machines, following a circuit that includes a treadmill, an arm bike, weights and other equipment.

He appreciates the safety net of having a registered nurse on hand, regularly checking progress and monitoring his overall wellness. “I know the RNs, and I love all of them,” Benson says. “They are just fabulous. I can’t emphasize their importance and dedication enough. They watch you very closely. If they think you are not feeling well, they are right there and want to know what’s wrong. We all give them a list of our medications, and everything is logged.”

By “we,” Benson means the center’s fellow clients, who include a half-dozen longtime patrons like himself. “We really are a very tight-knit group because everyone is in the same boat,” he says. “The fact that we go to the center three days a week gives us something to do;  we’re down there by 8 a.m. It gets us out of the house, and if one of us is not there, we want to know why. No matter what shape someone may be in, we try to build up the morale.”

As for Benson, he’s in enviable shape for a person a half his age. Besides his workouts three times a week, he visits a local mall on his “off” days, walking a mile indoors while he’s there. “Sometimes I walk a mile after my workout at the center,” he laughs. A widower two years ago, Benson lives on his own, driving to meet his daughter for lunch in Albany on occasion.

All of this activity only reinforces Benson’s decision to keep up his routine at the center. “I have seen people come and go, and then they have another heart attack,” he says. “The ones who stay with it tend to use me as a role model.” Once in a while, he talks with people who have abandoned the program. During those conversations, he always explains the benefit of sticking to workouts at the center. “My remark,” he shares, “is that I’m alive.”

0
Can shoveling put my heart at risk?
A Whole New Dimension in Breast Cancer Exams