After Collapsing, This Man Woke up a Month Later With a New Heart 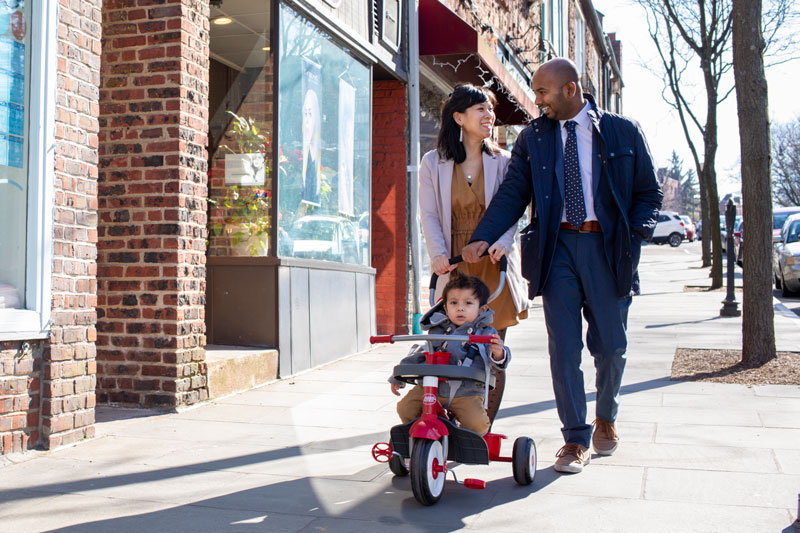 By Marc Ferris
As seen in the September 2020 Issue of Advancing Care.

“No,” said the 40-year-old pharmacist from Scarsdale.

Doctors, nurses and his family broke the news gently: During lunch in his workplace cafeteria a month earlier, he suffered a massive heart attack, which rendered him unconscious.

An important way to prevent heart disease is to see a cardiologist regularly. To make an appointment with a WMCHealth Heart and Vascular Institute specialist, please call 866.962.4327. To learn more about heart transplants, go to WestchesterMedicalCenter.org/HeartTransplant.

“I never had any heart issues or symptoms before this,” he says.
He is fortunate on at least two counts: He works at a nearby children’s rehabilitation hospital, so doctors and nurses in the lunchroom were able to tend to him immediately. And, his hospital is located across the Sprain Brook Parkway from Westchester Medical Center, in Valhalla.

Before Ananthasingam got to the Emergency Department, he received multiple shocks to restart his heart. Once at Westchester Medical Center, cardiologist Chhaya Aggarwal-Gupta, MD, and the team took over.

“He was in cardiac arrest during transit, and we had to shock him about 25 more times after he got here,” she says. “It was all-hands-on-deck preparing for his arrival.”

Miraculously, says Dr. Aggarwal-Gupta, “He woke up briefly after all that, keeping the oxygen flowing to his brain and giving us a small window to put him on the heart-and-lung bypass machine,” which took over respiratory function and maintained blood flow to his body. The team also inserted stents into his arteries.

“Everything happened at the right minute, and it all happened so fast, he suffered no brain damage,” she says. “However, after the tests came back, we knew his heart would not recover.”

How Can This Happen?

When he first heard about his new heart, “I was really confused,” says Ananthasingam. He frequented the gym, maintained a low-cholesterol diet and never experienced shortness of breath. “I felt perfectly fine. Why would I have a heart attack?”

According to Dr. Chhaya Aggarwal-Gupta, this can happen due to stress, neglecting one’s health and a family history of heart disease. Symptoms are often blamed on acid reflux, working too hard or failing to get enough sleep, for example.

Before the heart attack, Ananthasingam bought a home and recently welcomed his first child.

“We see young patients all the time who are compensating, and something small can tip them into cardiac arrest,” says Dr. Aggarwa-Gupta. “They think they’re tired or they have allergies and figure they will be okay. Not everyone has typical chest pain from blockages.”

Ananthasingam was put on the heart transplant list, and because of the severity of his condition, he received a new heart within five days. A post-transplant examination revealed that three major arteries in his heart experienced almost complete blockage (one was 100% blocked).

The transplant was conducted by Masashi Kai, Surgical Director of Heart Transplant at Westchester Medical Center. “This type of heart attack was very rare — the whole heart was infarcted. The procedure, however, went very well, and Pradeepan made a great recovery.”

To his nurses’ amazement, he started walking two weeks after he woke up, underwent several weeks of rehab and then went home. In February, six months after his transplant, Ananthasingam returned to work.

“The heart is amazing,” says Ananthasingam. “Even after working all day, I don’t feel tired at all.”

“Everyone at Westchester Medical Center was amazing, and it’s important to listen to your doctor’s advice. The doctors, nurses, along with the physical therapists, pushed me and got me through.”
—Pradeepan Ananthasingam

Up to a decade ago, heart transplant patients lived only a few years, at best, she says. Now, a donor heart can last 20 to 30 years.

“We have a cohesive and comprehensive team,” says Dr. Aggarwal-Gupta. “It really takes a village to make one heart transplant a success and ensure that the patient does well afterward.”

Transplant surgeon Dr. Kai agrees. “He was a candidate for transplant because of the quality of care provided by the rest of the team — before arriving at the hospital, in the ER and in the cardiac catheterization lab. He was in the right place.”

A donor shortage nationwide keeps the number of heart transplant operations performed in the United States at around 3,500 annually, according to the UNOS organ procurement and transplantation network. New York State ranks among the lowest in terms of registered donors nationwide each year.