How a School Nurse Saved This Cornwall Teen’s Life 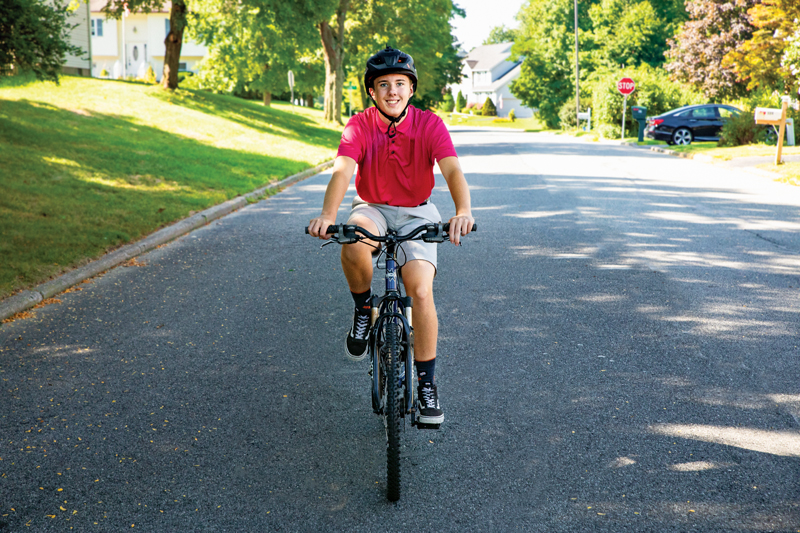 It was a hot summer day in August 2018, and 15-year-old Joshua Wozniak, his twin brother, Sam, and a friend were riding their bikes down to the Hudson River to go for a swim.

Having moved to Cornwall just three months earlier, the boys didn’t yet know what most locals do: Wood Avenue can be treacherous, with very steep inclines and curves. Josh was ahead of the others and going fast. He lost control of his bike, flew over his handlebars, and landed in some brush. But the situation turned out to be far more serious than a typical teen bicycle mishap.

“Josh was impaled on a pretty sizable branch,” recalls his mother, Lois. “He was bleeding a lot. Coincidentally, a woman who works as a school nurse in Washingtonville happened to be walking a dog nearby when she heard the boys yelling,” she says. “She came running, assessed the situation and began to calm Josh down.”

The woman, Val Sullivan, recognized the potential that Josh might be on the autism spectrum. “He was screaming in pain, but also saying ‘Mom’s going to kill us!’ There was definitely something different about him.”

He also didn’t want her to call an ambulance. “I have a very calm demeanor and was able to relate to him enough to get him into my car and drive him home,” says Sullivan. Josh used Sullivan’s cellphone to call his mom en route. “She wants me to tell you I don’t look good,” Lois recalls him saying.

Josh’s dad, Matt, on active duty at the United States Military Academy at West Point, met Lois and Josh at a local hospital, where emergency room doctors triaged and X-rayed Josh. But once they laid him flat on the operating table to treat his wound, his blood pressure dropped dramatically. A CT scan revealed something was inside the wound.

“Wood doesn’t show up on an X-ray,” says Lois. There was a piece of branch, about two centimeters wide and eight centimeters deep, pressing against Josh’s subclavian artery, just millimeters from his aorta. “If it moved, the branch could have punctured his lung or heart,” Lois recalls the ER surgeon telling her. “He said it was difficult to tell if Josh’s artery was damaged and that vascular surgery of that kind was beyond their scope.”

Josh was airlifted to Westchester Medical Center, the flagship of the Westchester Health Network (WMCHealth), in Valhalla, with Lois riding in the helicopter. Arun Goyal, MD, vascular surgeon at WMCHealth, met them there.

“There was a problem with his circulation, since the branch was compressing his artery,” says Dr. Goyal. “He had a left shoulder wound but was lucky to have no major injury to his nerves, veins or arteries. Fortunately, the branch entered between all the critical structures.”

Dr. Goyal performed surgery to remove the wood and close the wound. “A lot of hospitals are unable to treat complex injuries like this one,” he explains. “Here at WMCHealth, we have complete, 24/7 coverage by vascular surgeons, qualified to deal with the highest level of trauma.”
Following surgery, Josh spent the next 2½ days in the recovery unit at Maria Fareri Children’s Hospital, a member of WMCHealth. The accident happened on a Tuesday; he went home on Friday night and started school the following Wednesday. “At first, he had limited arm mobility but by December had regained a full range of motion, with no nerve damage,” Lois recalls.

“The medical care he received was just so good, and the emotional care was, as well,” says Lois. “Everyone was so kind — the doctors, nurses, the pastoral care.” Regarding the last of these, Lois says, “The pastor who visited Josh made an impact on him, like, ‘This person really cares about me and wants to hear what I think.’ He spent some really valuable time with Josh. It was so important for him to have someone to talk to, someone other than Mom.”

Lois also appreciates what the Child Life and Creative Arts Therapy department at Maria Fareri Children’s Hospital did for Josh. “A music therapist came to visit Josh and brought him a ukulele, showed him how to play it and sang some songs for him. Since then, she’s been inspirational for him. Since he’s into music — he plays euphonium, trombone, guitar and sings — he and I have discussed music therapy as one of the fields he could go into as a musician.”

Today, Josh is fully recovered and back to doing all the things he loves: riding his new bike, playing golf on the school team, performing in the school band, jazz band, choir and singing in Cornwall Central High School’s concert choir. The family’s 2019 summer vacation was highlighted by one of Josh’s favorite activities: “I’m a huge roller-coaster person, and Busch Gardens in Virginia is one of the best amusement parks I’ve been to. I like to rate them,” he said.

Sullivan, who brought her dogs to a reunion barbecue at the Wozniaks’ home this past summer, says, “Josh is a very sweet boy, and he took to my dogs right away. A year really flies by, and I’m glad he has done so well. Cornwall is an awesome community, and when people are in trouble, others help out. I am grateful I could relate to Josh enough to help him that day.”

“So many miracles came into play that day,” reflects Lois on Joshua’s medical care, including the perceptive intervention of his good Samaritan, Val Sullivan. Josh agrees: “It’s pretty scary to think what could have happened. I’m lucky to still be here.”