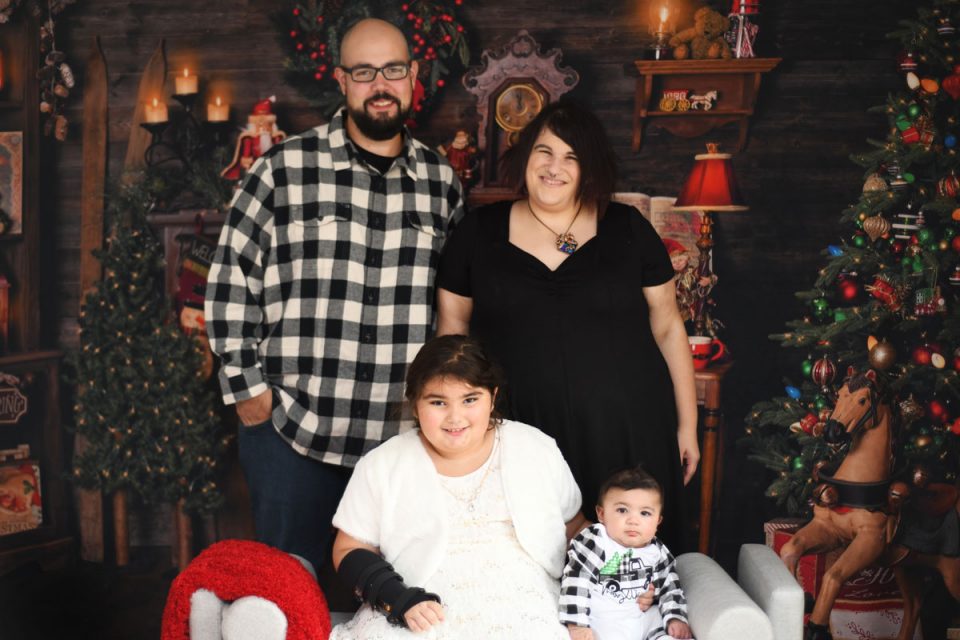 The Pressler family at their 2020 Christmas portrait shoot. “We are truly, truly blessed,” says Nicole Pressler.

When Izaiah Pressler was born with a rare heart defect, it took two procedures — expertly timed and executed — to save his life.

As seen in the February 2021 Issue of Advancing Care.
By Melissa F. Pheterson / Photos by Bellissimo Fotography

After an easy labor, Nicole Pressler delivered her second child, Izaiah, this past June. But as soon as the umbilical cord was cut, Nicole and her husband, Jason, watched him go limp on her chest and turn a frightening shade of blue — a sign that he was deprived of oxygen. “We realized something was really wrong,” says Nicole. Izaiah was rushed by helicopter to Maria Fareri Children’s Hospital, in Valhalla, a member of WMCHealth. There, a sonogram confirmed the doctors’ suspicion: transposition of the great vessels, or d-TGA, a rare and serious heart defect.

The heart typically pumps blood in a “series circuit,” explains Markus Erb, MD, Director of Inpatient Services for the Pediatric Cardiology Team at Maria Fareri Children’s Hospital. The pulmonary artery sends blood to the lungs to gather oxygen; once replenished, the blood returns to the heart, where the aorta pumps it out to nourish the rest of the body. But Izaiah’s aorta and pulmonary artery were reversed, meaning his oxygen-rich blood (red blood) flowed to and from the lungs, while only oxygen-poor blood (blue blood) flowed to the body, denying the body its vital fuel.

Parent to Parent
“I would tell other parents to trust and believe in the team. These babies have the best team fighting for them, and these kids are little warriors. Dr. Erb was one of the first people I talked to on the phone. All I had to go on was his voice, yet I still knew Izaiah was in great hands. And Dr. Nguyen went so in-depth: He reviewed potential complications, how he would respond and next steps for any issues. There was always a plan to keep going. That’s reassuring when you’re handing the baby over for open heart surgery. Plus, everyone in the NICU was concerned with how I was feeling too — making sure I was fed and taken care of.”
– Nicole Pressler

But the day of Izaiah’s birth was not the time for a major surgery; the newborn needed a temporary fix to become stable. “We decided to create a slight opening between the two upper chambers of the heart, or atria, so the blood could mix enough for oxygen to flow through the body,” Dr. Erb says.
Izaiah gained strength and weight for the next two weeks, which prepared him for corrective surgery. Then he was placed in the hands of Khanh Nguyen, MD, Chief of Pediatric Cardiac Surgery, for what he describes as the “switch operation,” restoring the aorta and pulmonary artery to their proper anatomy. (See sidebar.) Dexterity and precision are key: The arteries have to be switched at the same time.

“Our team of nurses, neonatologists, cardiologists and surgeons all worked together to save him.
— Markus Erb, MD

The next day, Izaiah’s breathing tube was removed, and he began receiving feedings. During their stay, COVID-19 precautions required Nicole and Jason to take turns at their son’s side, but the medical team took care to keep the whole family involved and informed.

Pediatric Cardiology for the Tiniest Patients
“Our pediatric cardiology approach focuses not just on the operation but on recovery, feeding, pain control and beyond,” says Dr. Nguyen. “We aim to perform operations in a way that avoids or minimizes the need for blood transfusions. We make sure the baby’s feedings and caloric intake increase, so they can cope with stress. And when possible, we create the incision under the baby’s arm — an opening that barely fits my thumb — to prevent that subsequent, prominent scar.”

“Our team of nurses, neonatologists, cardiologists and surgeons all worked together to save him, and I believe he will live a full and normal life,” says Dr. Erb.

Izaiah is now active, alert and strong, and at the time of this interview, Nicole, Jason and their 7-year-old daughter, Noelle, enjoyed celebrating their first holiday season as a family of four. “He was our Christmas miracle,” says Nicole. “This has been a hard year, but he made our family complete. I can’t wait to see what every year brings this special guy. I just know he’s going to do some great things.