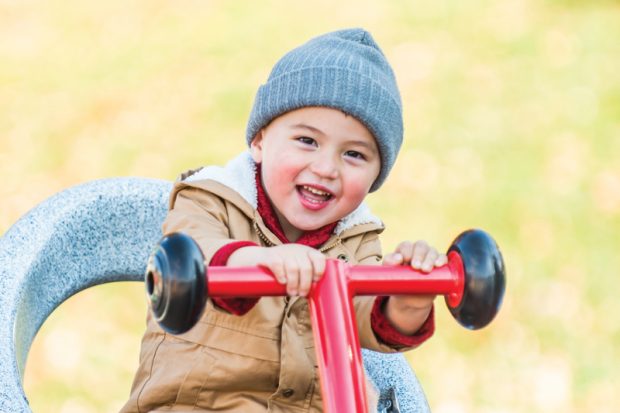 Christmas came a day late in 2015 for Malory and Christopher Saki of Cornwall, when their son Gabriel was delivered on December 26.

While Gabe was a happy and healthy baby, his pediatrician detected a heart murmur during a routine six-month checkup. A follow-up appointment revealed that Gabe had an atrial septal defect, also known as a hole in the heart. “When we first found out, we were shocked,” recalls Malory. “You never think your baby is going to have that type of problem.”

To make an appointment with a pediatric cardiology specialist at Maria Fareri Children’s Hospital, call 914.493.8372 or visit MariaFareriChildrens.org/pediatric-cardiology for more information.

Their first consultation with a pediatric cardiologist resulted in a recommendation that frightened them: open-heart surgery. Hoping for an alternative, Malory, a forensic scientist, researched other local pediatric cardiologists and found Joseph Giamelli, MD, a pediatric cardiologist at Maria Fareri Children’s Hospital, a member of the Westchester Medical Center Health Network (WMCHealth). When Dr. Giamelli saw Gabe, then 8 months old, he confirmed that he had a fairly sizable atrial septal defect. But rather than immediate surgery, he recommended monitoring him every six months, because, says Malory, “He was growing normally and not experiencing symptoms.”

An atrial septal defect is a birth defect that causes a hole in the wall between the heart’s upper chambers or atria; The Centers for Disease Control and Prevention (CDC) estimates that more than 200,000 of these defects are found in the United States each year, and many babies born with it don’t have any symptoms. “Symptoms generally do not present until young childhood or sometimes much later in life,” says Dr. Giamelli. “You might see a failure to thrive or poor growth, fatigue with exercise and normal viruses and respiratory infections that last longer than typical.”

The Advantages of Axillary Incision

Instead of splitting open the breastbone to allow access for open-heart surgery, Khanh Nguyen, MD, makes an incision near the armpit under the right arm to create an opening in the chest wall. While he repairs the hole in the heart, a heart-and-lung bypass machine is connected to take over the functions of the heart and lungs; the latter must be deflated to allow access to the defect.

While the surgery doesn’t take less time than the traditional procedure and requires a great deal of expertise, explains Dr. Nguyen, this less-invasive procedure has greater advantages for the patient – the most apparent being the absence of a big scar. The technique also enables a quicker and easier recovery.

“Because we are not cutting the breastbone, there is no bone to heal,” he explains. “Instead of remaining in the hospital a week, these pediatric patients are often home the next day.” Dr. Nguyen says most of the surgeries he performs now use the axillary approach. “It’s a real game changer.”

Diagnosis is determined by performing a physical exam, listening to the heart with a stethoscope and reviewing an electrocardiogram or EKG. In Gabe’s case, it was causing an enlargement of his heart’s right side. “Unrepaired, the right side of Gabe’s heart would have gotten progressively larger,” explains Dr. Giamelli. “He’d have difficulty with exertion and exercise and then become tired during normal activity. He could also develop arrhythmia or extra heartbeats.” And while small atrial septal defects may close by themselves, larger ones, like Gabe’s, may require surgical intervention.

By July 2019, it was time to consider surgical options. Dr. Giamelli referred the Sakis to Khanh Nguyen, MD, Chief of Pediatric Cardiac Surgery at Maria Fareri Children’s Hospital. Dr. Nguyen specializes in a less-invasive procedure called axillary incision. For more than 15 years, Dr. Nguyen has performed the procedure extensively and refined his own technique to make it more applicable to a greater range of conditions.

Dr. Nguyen performed the procedure on Gabe days before his third birthday (see sidebar). After one night in Maria Fareri Children’s Hospital’s pediatric ICU, Gabe was back home. “Twenty-four hours after surgery, he was trying to run around through the ICU,” recalls Malory. A week later, at his follow-up, she says, “His heart had already gone down in size.”

Although it was a difficult period, she adds, “Our experience was amazing. Everyone was so top-notch. Dr. Nguyen was so calm, and he and his team checked on Gabe constantly.”

Today, Gabe is doing great, and his parents have noticed a surge in his energy level and appetite. “Before, Gabe was a mellow kid who sat and played quietly,” says Malory. “Now, he loves to run around and is full of energy.” His long-term prognosis, according to Dr. Nguyen and Dr. Giamelli, is excellent. “He has no restrictions, needs no further medications and can play whatever sport he likes,” says Dr. Nguyen. “He will be a regular child with a regular life expectancy.”