When a whitecap knocked a local teen from a jet ski, her brother kept her alive before the trauma team took over.

Early dismissal in June at New Jersey’s Clifton High School meant one thing for 18-year-old Ryley White: taking the family jet skis to Greenwood Lake on the New Jersey-New York border with her boyfriend, Stephen, her brother Ryan, and his girlfriend, Heather.

Despite the gray skies and rough water that afternoon, they decided to steer the jet skis toward a swimming spot they’d heard about. Arriving first, Heather — with Ryley as her passenger — realized the lake was too choppy. She waved to Ryan and Stephen to turn around.

“When she took the turn, a whitecap slapped the side of the jet ski and swept Ryley off,” Ryan recalls. “I wound up hitting the whitecap, and my jet ski bumped into her head. My girlfriend screamed: ‘She’s bleeding!’ She was slipping through her life vest and starting to drown.”

Even swimming as fast as he could, Ryan estimates it took a full minute to reach his sister as he fought the waves.

“I had to do mouth-to-mouth in the water,” he says. “While I applied pressure to the head wound, Heather took the jet ski to flag down help from a passing boat. I had to loop my hand through Ryley’s vest and kick her over to the boat. We kept applying pressure to the wound, to stop the bleeding, then pulled up to a bar on the side of the lake. The roofers working next door to the bar had heard us screaming from the middle of the lake and had called 911.”

Ryan and his parents, Kevin and Lori, recall weaving in and out of traffic on the Tappan Zee Bridge — notorious for its congestion on Friday afternoons — scanning the sky for helicopters as they headed toward the hospital.

Gary Lombardo, MD, trauma surgeon at Westchester Medical Center, describes Ryley’s injury as “blunt force trauma to the head, resulting in multiple small intracranial hemorrhages.” And although her skull didn’t fracture, the impact to her head was severe.”

Ryley’s MRI also revealed an injury along the cervical spine, or neck, with ligament sprains typical of whiplash.

When her family arrived at Westchester Medical Center, doctors were sewing the gash on Ryley’s head. 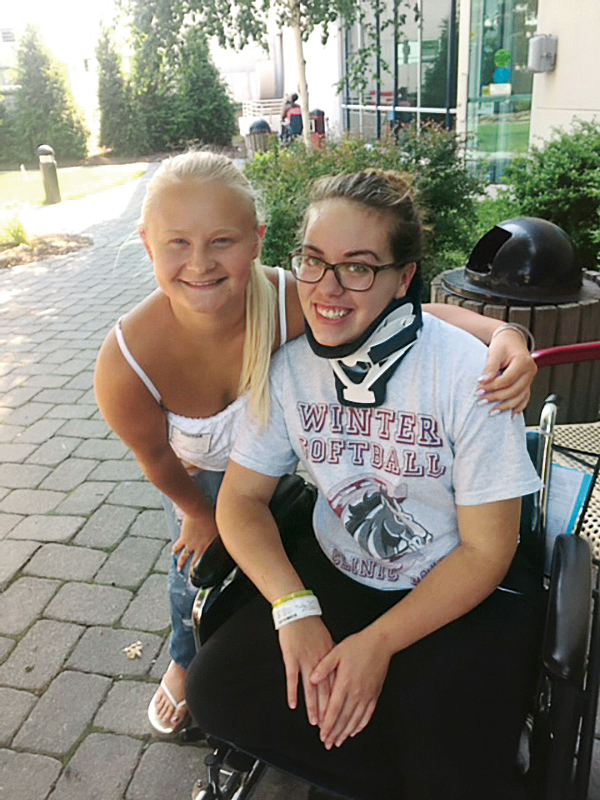 Ryley and Heather at the rehab facility. Ryley had to wear a cervical collar for six weeks while her vertabrae healed.

“She’s got a hard head,” Ryan adds, his humor belying a fierce affection and protective impulse toward his sister. To protect her airways, the trauma team placed Ryley on an endotracheal tube and mechanical ventilation.
The ICU team monitored her brain injury with neurological exams performed every hour and frequent CT and MRI imaging. “The exams and scans demonstrated no progression of the injury— allowing the team to continue management without surgical intervention,” Dr. Lombardo says.

Listen to Your Mother

Kevin and Lori appreciated the medical team’s communication. “The doctors explained everything, plain and simple,” says Kevin. “They didn’t give us false hope. They gave us the best-case scenario and the worst-case scenario.”

When they were told Ryley might not regain consciousness, Lori replied, “That’s not an option. She’s 18 years old.”

Ryley’s care team included her parents, who obviously know their daughter best of all. When Lori watched the nurses coax her daughter to wake up, saying, ‘Come on, Ryley, squeeze myhand!’ softly and politely, she advised them: ‘You don’t ask her to wake up; you tell her.’ Then, she said: ‘Ryley, you wake up,right now!’”

Like a good daughter, Ryley complied, by stirring on that Sunday morning.

“At first she could only blink,” Lori says. “Then, I thought I saw her using sign language. I looked at the doctor and said, ‘She’s trying to talk to us!’ She signed that she needed a pencil and paper and wanted to sit in a chair. She couldn’t wait to sit up.”

By Sunday evening, Ryley was breathing on her own. “She knew us, her family,” says Ryan, “and recognized her friends by their faces.” 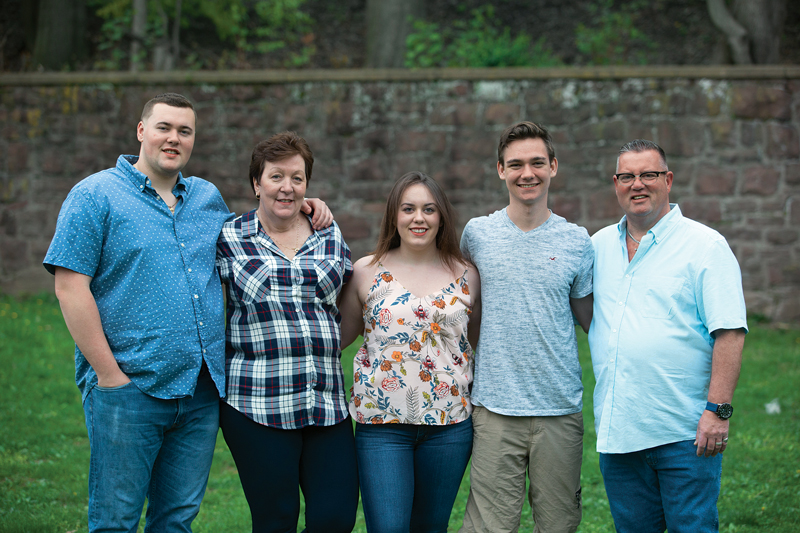 From left:Ryan, Lori, Ryley and Kevin (far right) with Stephen at the Whites’ home in New Jersey.

After a week at Westchester Medical Center, Ryley stayed a few days at a rehabilitation facility in New Jersey, near her home. From there, she required only outpatient therapy for six months. Dr. Lombardo was able to remove Ryley’s cervical collar after six weeks, once the vertebrae had healed.’

She was flying through everything,” Lori reports. “She got her license back, returned to school and went back to work at the bakery — where she could exercise her brain just by dealing with people and making change.”

Although Ryley missed her prom and graduation, she plans to start college this fall at Montclair State University. Inspired by her experience communicating with her care team through her medical challenges at the hospital, she plans to pursue the study of sign language.

Dr. Lombardo says that patients with critical injuries such as Ryley’s require a level of care that only Level I trauma centers like Westchester Medical Center can offer.

“The commitment of our staff, as well as the resources available to provide the highest-level care 24 hours a day, seven days per week, makes the difference,” Dr. Lombardo says. “Our facility provides total care for every aspect of injury.”

Kevin and Lori say they appreciate Westchester Medical Center’s small acts of kindness as much as its cutting-edge care. “Ryley’s nurses and doctors were excellent. One nurse would sit by her bed, talk to her and comb out her hair,” Kevin says. “The staff even offered to wash our clothes.”

0
Diary of a Survivor
A Sweet Separation