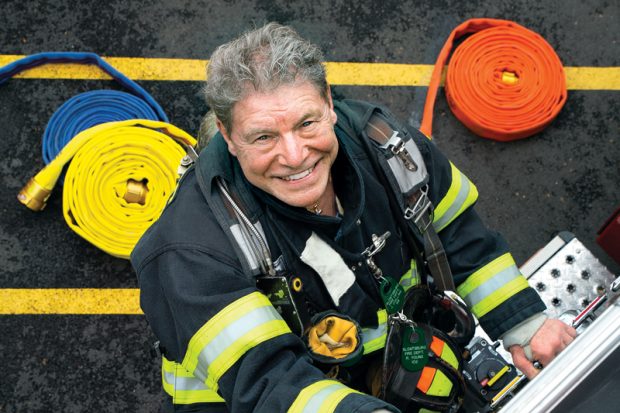 Knee pain forced him to give up rowing. Next was bowling. But “the straw that broke the camel’s back,” says Robert Young of Sloatsburg, was severe pain after he moved some tree trunks around his property in a wheelbarrow.

Young, 65, leads an active life. His job as a condominium superintendent keeps him on the move all day, climbing ladders, fixing elevators and the like. For 38 years, he’s been a volunteer firefighter; for the last five, he’s served the department as a scuba rescue diver.

But Young’s knee pain was interfering with activities he loved. Despite his “very high tolerance for pain,” he knew he had to do something about his knees. In the fall of 2016, Young consulted orthopedic surgeon Arup Bhadra, MD, Director of the Total Joint Replacement Center at Good Samaritan Hospital, a member of the Westchester Medical Center Health Network (WMCHealth). After an exam and X-rays, Dr. Bhadra diagnosed Young with osteoarthritis (OA) in both knees.

Experienced by about 27 million Americans, OA is the most common chronic condition of the joints. Unlike in normal joints, where cartilage is a cushion between bones, in OA, cartilage breaks down, resulting in pain, swelling and decreased mobility. While OA is most commonly seen in those over 65, obesity, overuse, previous injury and genetics are contributing factors.

Damaged tissue and bone are replaced with a prosthetic implant. “We take a very thin slice of arthritic bone from the knee, and we add in metal pieces of the same shape, with a little plastic spacer in between, which works like smooth cartilage,” says Dr. Bhadra. In September 2016, he performed this procedure on Young’s left knee. Young recovered quickly, returning to light-work duty after five weeks and to the fire department after two months.

Young was so pleased that he returned to The Total Joint Replacement Center to have a partial replacement on his right knee in October 2017. This time, Dr. Bhadra offered him a newer, more technically advanced procedure — MAKO robotic-arm-assisted surgery. The Center started offering robotic surgery earlier that year, and Good Samaritan Hospital is one of the only hospitals in the region with this capability. “By bringing this option to Good Samaritan Hospital, we’re staying ahead of the curve and offering our patients the very best care,” says Dr. Bhadra.

“We call it robotic, but it’s actually minimally invasive, computer-assisted surgery,” says Dr. Bhadra. “The surgeon remains totally in control.” A robotic CT scan of the joint, taken before surgery, gives a three-dimensional picture of the joint.

“My mobility came back twice as fast the second time around with the robotic surgery,” Young confirms. “I got off painkillers earlier and had an easier and faster recovery.” Indeed, just three weeks after his second surgery, Young was dancing at a reunion party held for the hospital’s joint-replacement patients and medical staff.

“The hospital was excellent, and Dr. Bhadra was amazing and very clear in explaining what was going to happen,” says Young.

Today, Young is back to his active routine and feels “wonderful – I’m 99 percent better.” In fact, his ability to keep up with his 30-year-old buddies at the firehouse has earned him a new nickname: Iron Man.

0
What is the keto diet, and is it healthy?
New Technology Supports Pre-Hospital Care for Seriously Ill and Injured Patients