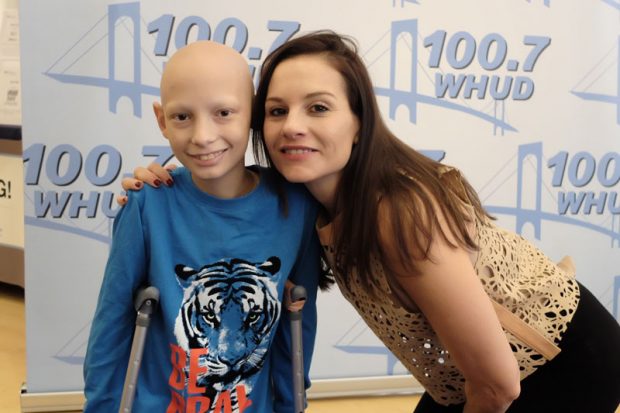 Maria Fareri Children’s Hospital teamed up once again with Peekskill-based WHUD to host the 13th Annual 100.7 WHUD Radiothon for the Kids. The Radiothon, which featured WHUD personalities Mike Bennett, Kacey Morabito Grean, Tom Furci and Andy Bale, was broadcast live on Nov. 15–17 from the lobby of the Valhalla-based children’s hospital, a member of the Westchester Medical Center Health Network (WMCHealth). During the event, listeners called in and donated to help support essential care for the area’s most seriously ill and injured children.

The radio personalities interviewed numerous Hudson Valley children and their families, who returned to the hospital to share their uplifting stories of how they conquered significant medical challenges at the Children’s Hospital. Former American Idol judge and singer-songwriter Kara DioGuardi was also interviewed about her new endeavor, Tri- State Rocks, a youth-singing competition held in December to raise money for Maria Fareri Children’s Hospital and other children’s causes.

Among the former patients and families who took part were three Radiothon “stars”: 3-year-old Tyson Philip, who was born prematurely; 4-year-old Sophia Pinto, who underwent life-saving heart surgery after birth (read Sophia’s story on page 12); and 9-year-old Emilié Saltzman, who was treated for traumatic brain injuries at the hospital after being thrown from a horse. Local scout troops, sports teams and area families brought their collected “loot” to the hospital to be counted as part of the hospital’s Western-themed “Change Bandits” donation program.

0
How can I keep fit through the winter?
What Affects Heart Disease?