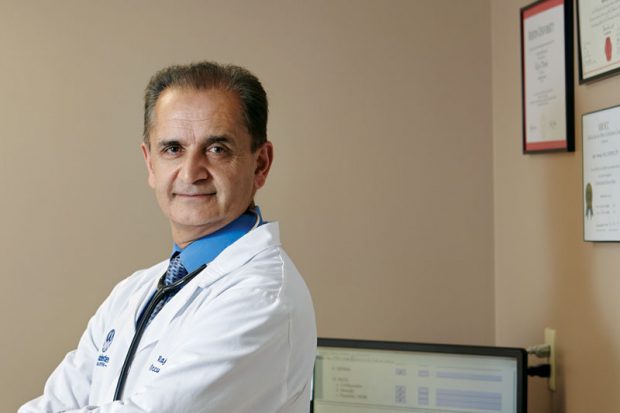 Rajiv Narula, MD, combines his medical expertise with a lifelong passion for travel to help adventurers stay healthy in difficult conditions around the globe. “Travel inspires me to think of things differently, and I’m always learning in the process,” he says. “It makes life fun.”

Dr. Narula is an internist at MidHudson Regional Hospital, a member of the Westchester Medical Center Health Network (WMCHealth). He also provides travel-medicine services that help safeguard patients’ health as they explore the world’s most challenging and exotic locales – whether for business, study, humanitarian work or pure wanderlust.

“I enjoy educating my patients about preventative healthcare, proper nutrition and lifestyle issues,” says Dr. Narula. “Though I may see them for an administrative examination, the time that I get to spend with the patient is crucial, as I can suggest lifestyle modifications that can be beneficial to them.”

Dr. Narula’s travel patients typically frequent exotic locales across India, Southeast Asia, Africa and Latin America. The biggest health risks they face, he says, are food- and water-borne illnesses, like hepatitis A; people-to-people infections, like hepatitis B; mosquito-borne illnesses, such as malaria; animal-related infections, like rabies; and issues related to the environment and inaccessible healthcare.

To help create a customized treatment strategy, patients complete an enhanced health questionnaire that covers lodging, food and activities, as well as expected travel conditions of their upcoming trip. Patients also have access to travel medicine supplies, which include items such as insect repellants, a suture kit, sterile needles and syringes, a first-aid kit and an ultraviolet pen to sterilize water. “They leave the office with everything they need,” says Dr. Narula, who is certified in travel health and family medicine. 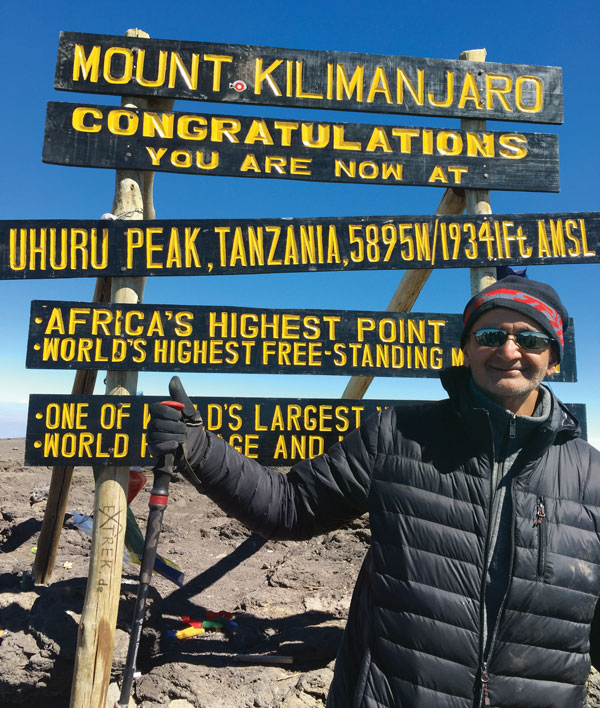 Having visited 25 countries, Dr. Narula’s interest in adventure travel was ignited several years ago, when he ventured to Machu Picchu in Peru with friends. In 2017, some original members of that group, additional friends, as well as Dr. Narula’s wife, Michelle, and 17-year-old daughter Simran, decided to conquer Tanzania’s Mount Kilimanjaro.

Approximately 25,000 people attempt to reach Kilimanjaro’s summit each year, but not all succeed. Every year, approximately 1,000 people are evacuated from the mountain, and between 10 and 30 climbing deaths are reported, largely due to altitude sickness resulting from low oxygen levels.

“You need to be in shape; this is not a joke,” he says. To prepare, he and his family trained for over a year. This included several hikes up Mount Beacon in Dutchess County. Though Mount Beacon peaks at less than one-tenth the height of the 19,000-foot Kilimanjaro, they diligently trained, sporting 20-pound backpacks, to simulate the conditions they’d encounter in Tanzania.

In August 2017, after administering the requisite vaccines to his companions, they departed for the once-in-a-lifetime adventure. Following a stopover in Amsterdam to recover from the jet-lag, they arrived at Kilimanjaro, armed with insect repellants and having started malaria tablets the day prior.

Per Dr. Narula’s advice, the group started a course of Diamox, a medication that combats altitude sickness. Dr. Narula conducted daily medical checks on the group, including blood pressure and pulse, as well as questioning them on whether they were experiencing symptoms such as headaches, and reminding them to stay hydrated. As news spread of a travel doctor in their midst, Dr. Narula was called to treat sick climbers in other groups. After a couple of days, two climbers in his group began to succumb to the effects of the low-oxygen environment. 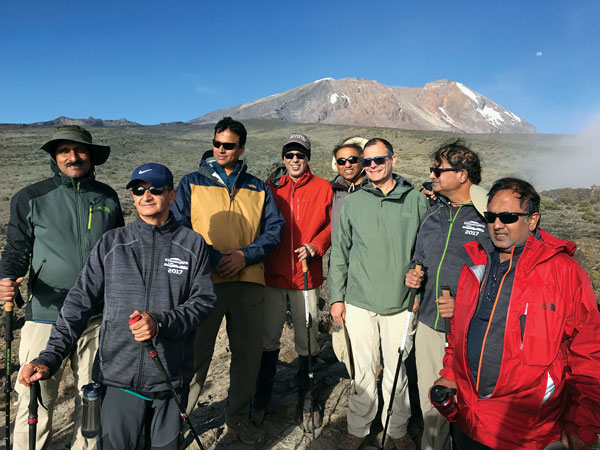 In 2017, Dr. Narula, (in baseball cap) along with family and friends, took on Mount Kilimanjaro.

“Along with Prosper, our head guide, I decided to send one of our group members down due to health issues during our final ascent.  She was unable to do it. Before I sent her down, I gave her a dexamethasone, to help treat her mountain illness,” he recalls. “She was carried back down the mountain by a porter.”

After a grueling four-day summit hike, the group embarked on the trip’s last leg, at 10:30 p.m., which deposited them at the summit almost 12 hours later. “We picked a night when there would be a full moon,” remembers Dr. Narula.

On Top of the World

“Reaching the summit was amazing. At that point, we were very short of breath, and we could walk only very slowly. You could see the glaciers, though 80 percent of them are now gone.”

Once the climbers reached the top of the mountain, they remained for an hour, enjoying the view and savoring their accomplishment. 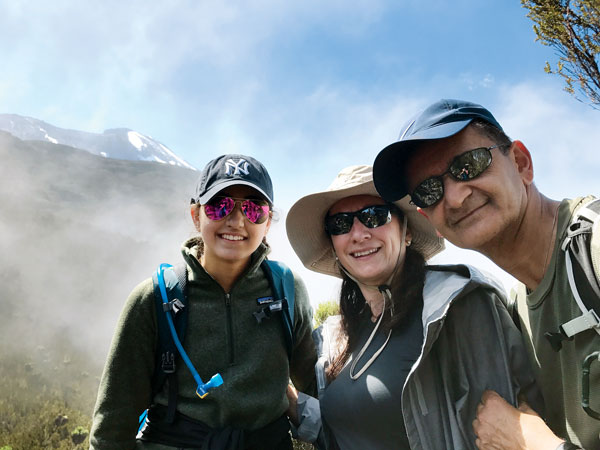 Dr. Narula’s wife, Michelle, and 17-year-old daughter, Simran, were on the climb, as well.

The climbers completed the two-day descent triumphant but battle-worn. “We had only consumed a minimum of food, and we were exhausted. A few people were recovering from altitude-related issues, including bronchitis, but there were only a few falls and no big injuries,” says Dr. Narula, who added that it took a month for his group to fully recover from the trip.

“It’s a great trip, and I would do it again, as long as health issues are maintained,” he reflects. “We all gained a lot of confidence that you can do whatever you want if you set your mind to it.”

0
What should I do if my child is being bullied — or is the bully?
Westchester Medical Center and Maria Fareri Children’s Hospital Awarded Reverification of Top Level trauma Status