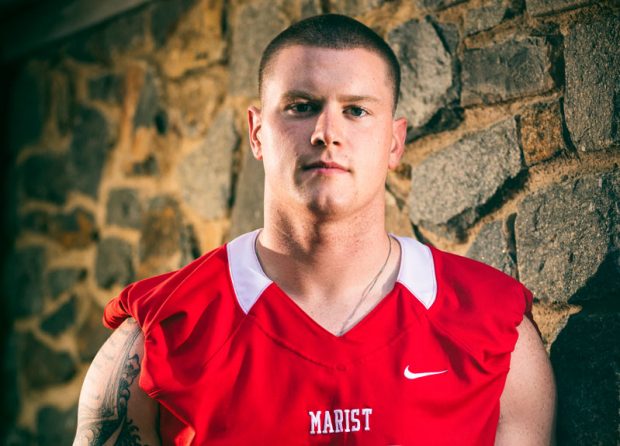 A sports-medicine expert at Marist College made sure Dan Rice recovered from two injuries and discovered an entirely new passion.

Rice, 24, grew up in the town of Newburgh and was an all-state offensive lineman at Cornwall High School. He was recruited and offered scholarships by several schools, but he chose to stay close to home at Marist.

“The coaches were great; I liked the smaller classes, and I wasn’t sure my 18-year-old self was responsible enough to go to class,” he says with a laugh. “So I ended up 20 miles from my house.”

In 2016, he reinjured an injury to his right shoulder while lifting weights. He had an operation at a local hospital that he thought would fix the problem. But then, during a football practice in his senior year at Marist, he was hit in the arm.

“I knew right away it was hurt again,” he recalls. “I tried to play through the pain, but I made it through just a game and a half. I was almost playing with one arm,” he says. As a left tackle, trying to stop very big men from crushing his quarterback, one arm wasn’t enough, even for the 6-foot-5, 300-pound Rice.

He went to see his team physician, Jeremy Mangion, MD, also an orthopedic surgeon at MidHudson Regional Hospital, a member of the Westchester Medical Center Health Network (WMCHealth). Dr. Mangion holds a sub-specialty certification in orthopedic surgery sports medicine and serves as the team physician for the athletic department at Marist, as well as other area colleges.

The diagnosis was a tear of the labrum, the soft tissue that holds the top of the arm bone and the shoulder in proper alignment. Rice had torn both the front and the back of the labrum; a tear in the front is common in the general population, but rarely does anyone other than an athlete, especially a football player or weightlifter, tear the back. “An offensive lineman is always pushing against defensive linemen, and that can push the arm back and cause a tear,” explains Dr. Mangion.

Using minimally invasive arthroscopic techniques, Dr. Mangion repaired the labrum and re-anchored it to the bone. Rice missed the rest of the season recovering, but had a year of eligibility left. After graduating in 2016 with a degree in criminal justice, he enrolled in the masters of public administration program at Marist and prepared for another season. By the beginning of training camp, his shoulder felt great. But while lifting weights during preseason workouts, he felt something pop on the right side of his chest. 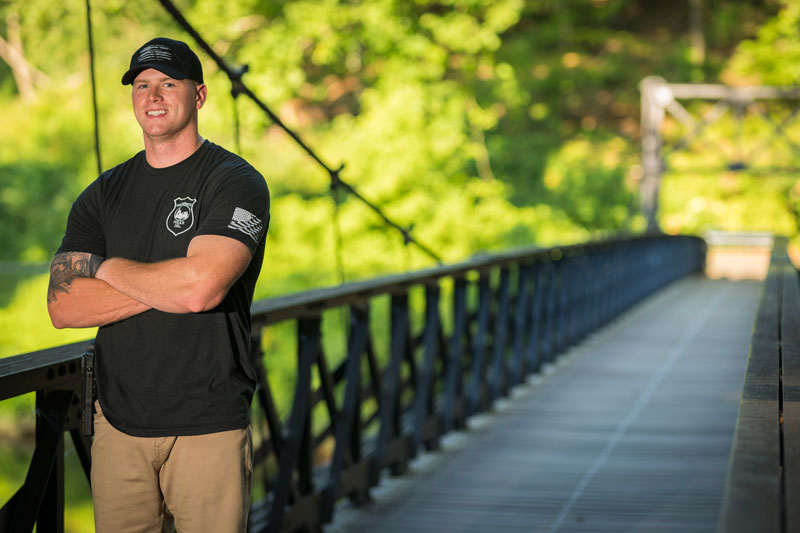 Rice, now a resident of Wilmington, Delaware, is pursing his dream of being a police officer.

“I dropped the weight. It hurt a lot worse than the shoulder injury. My chest turned purple pretty quickly,” he says. This time, he had torn the tendon that connects the left pectoral muscle in his chest to the arm — another injury that rarely affects anyone other than football players and weightlifters, according to Dr. Mangion. Surgery had to be done quickly,  because the tendon had rolled up inside Rice’s chest. “Dr. Mangion explained that if he didn’t do it quickly, scar tissue would build and he would not be able to repair it,” Rice says. About three weeks after the injury, Dr. Mangion opened the chest to find the tendon, drilled holes in the arm bone and reattached the tendon with strong sutures.

With his final season over before it began, Rice was understandably disappointed. It took about seven months of rehab before he could do push-ups, and about nine months before “I was feeling like myself again,” he recalls. “I took it slow, because I had no reason to rush.” He also lost about 70 pounds, knowing there would be no more football for him. But there would be the opportunity to fulfill another dream: attending the police academy.

“I come from a long line of law enforcement officers,” says Rice, whose father is a retired New York City police officer and whose uncles are retired police officers. Rice applied to police departments all over the country. “I wanted to start my career,” he says. The department in Wilmington, Delaware, was the first to offer him a spot, and he accepted the offer. The training included plenty of physical action, he says. He had no issues with either of his injuries and graduated in June 2018.

As the Marist team physician since 2014, Dr. Mangion is on the sidelines for most games of high-contact sports, like football, basketball and lacrosse. He also works with team trainers to help rehabilitate injuries, performs preseason physicals and consults on any and all team medical issues. “It’s a great experience,” he says. “It’s quite enjoyable to get to watch the games, but the big thing is to ensure the players are safe.”

The same advanced surgical techniques he uses on high-level athletes are available to everyone else, he says. “More surgeries can be done arthroscopically as outpatient procedures,” meaning smaller incisions, less blood loss and pain and quicker recovery time for patients. Likewise, he can treat conditions such as arthritis and labrum tears in this manner. And, he adds, rehab technology has improved. “We are better at treating many injuries without surgery now.”

Whether the patient is a Division 1 athlete like Dan Rice, a teenage soccer player, a middle-aged weekend warrior

or a senior golfer, Dr. Mangion’s goal “is getting patients back to doing what they love and gaining full functionality, or as close to it as possible.”

Reflecting on his journey and recovery, Rice says, “My experiences as a whole with MidHudson Regional Hospital and Dr. Mangion were great from start to finish. Dr. Mangion is not only a great doctor, but his professionalism is second to none.”