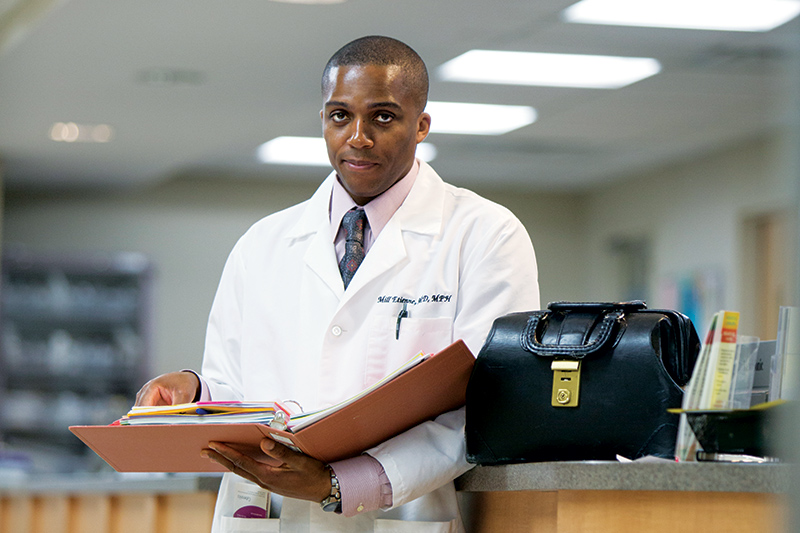 If he could, Bon Secours Neurologist Mill Etienne, MD, would probably pack inside his signature doctor’s bag (he’s known for carrying it everywhere) the tools he uses to advance the field of neurology at Good Samaritan Hospital in Suffern, a member of the Westchester Medical Center Health Network, and elsewhere. Unfortunately, the tools he uses most—EEGs (electroencephalograms), implantable devices and educational programs for high school and medical students—are not portable. Dr. Etienne practices at Good Samaritan Hospital, and his main concerns are the treatment of people with epilepsy and traumatic brain injuries and the prevention of serious head injuries in sports.

Dr. Etienne came to Bon Secours Medical Group after a stint in the Navy. “I was a senior in medical school when the terrorist attacks on the Twin Towers occurred, and I became interested in joining the Navy. When I started my residency, I began the application process, and by my second year I was commissioned.” Eventually he served active duty at Walter Reed National Military Medical Center in Bethesda, taking care of the troops from all the branches of service. He was deployed to Haiti for several weeks after the devastating 2010 earthquake, and though he’d grown up in Rockland County, he’d spent the first five years of his life in Haiti and spoke Haitian Creole. In fact, he was the only physician on the ship who did. “I was appointed the chief ethicist and helped organize an interpreter service,” he says, so the care would be both compassionate and culturally sensitive. He’s gone back regularly as a volunteer, and he’s helped organize programs for other physicians to volunteer there.

Interested in math and science from childhood, his focus on the brain began in college. Between his freshman and sophomore years, he worked in the Emergency Room at Harlem Hospital, shadowing a few doctors. “I liked seeing the various interventions, the life-saving procedures. People came into the ER desperate, and the ER doctors were able to oftentimes fix the problems…. I enjoyed that.” He decided then that he wanted to be a doctor.

Head injuries from sports are a major concern for him, and he wants to prevent kids from having the problems some players, including famous sports figures, have developed after being injured on the field. “I’m working with the local high schools to educate students about the importance of taking care of their brain in terms of proper diet, exercise and the importance of sleep and recognizing head injuries.” He’s not a dad himself yet, but he’s married to a pharmaceutical researcher who monitors the adverse effects of drugs during clinical trials.

At Walter Reed, he was the Founding Director of the Epilepsy and EEG lab, and, in 2012, he was hired by Good Samaritan to implement and direct a similar service in Suffern. Previously, some patients had to travel to New York City to get the care they needed. “Epilepsy is the fourth most common neurological disorder. It affects a large number of people of the Hudson Valley,” he says. Among the tools in his epilepsy bag: EEGs, which help diagnose epilepsy, and something called a vagal nerve stimulator, an implant patients can activate if they feel a seizure coming on.

Dr. Etienne also guides about 80 students through medical school in his role as Advisory Dean at New York Medical College. “I serve as a mentor and advisor as they go through the four years. I didn’t have that, and I think it’s a great thing to have, somebody looking out for you, taking you through your four years.” For Dr. Etienne, it comes naturally—his focus is and always has been on helping others.