Not Skipping a Beat 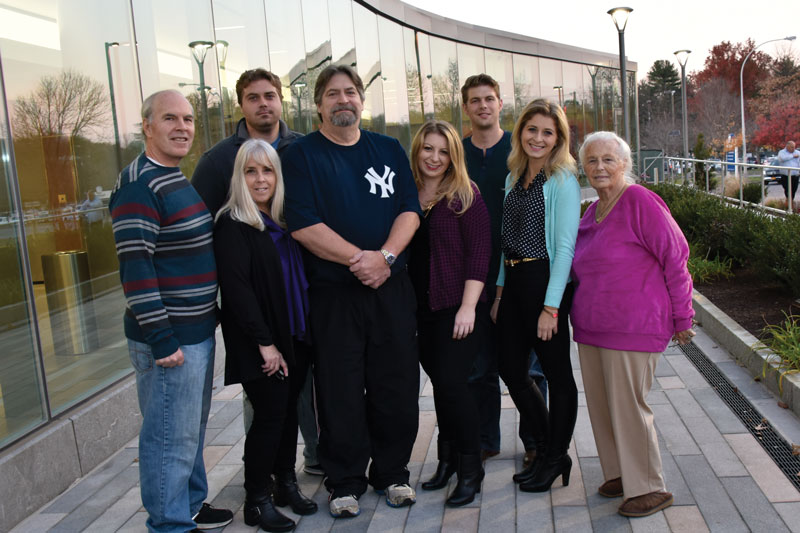 To tweak an adage about love, the right heart is worth the wait.

Jim Fischer was pale, weak and bedridden when his wife and daughter helped him into the back of their car on a cold day in March 2013. After a massive heart attack on Columbus Day weekend of the previous year, the carpenter’s heart, and health, had steadily declined.

Dr. Gass diagnosed Fischer, who was 53 at the time, with nonischemic dilated cardiomyopathy; meaning, his heart had severe damage for reasons unknown. Meanwhile, Fischer’s local doctors had doubts about the viability of performing a heart transplant. “We were told finding a donor would take years — and we thought we only had weeks,” says Fischer’s oldest daughter, Jaci. “Plus, a heart transplant seemed so far-fetched.”

Known as “Fish” to family and friends, Fischer was the perfect candidate for a heart transplant, according to Dr. Gass, but a difficult donor match.

“He was young, active and in good health, except for his heart,  but he was a big guy: six-foot-one, 200 pounds,  and blood type O, which meant he’d have to wait a long time for a transplant,” says Dr. Gass. “He needed the heart of a man of similar size and the same blood type.” The result was that Fischer would have to wait months.

“I was told my heart was the size of a football, so I knew I was in there for the long haul,” Fischer says.

Dr. Gass asked Fischer whether he’d like to wait in the hospital, supported by IV medication, or return home with a left ventricular assist device, a mechanical pump that is a “bridge to transplant” but that requires open-heart surgery.

“When he decided to stay in the hospital,” says Dr. Gass, “it became my job to keep him stable,” which entails more than just pumps and monitors.

“Our success rate has been excellent in keeping patients alive until they get their hearts, because we address not only their medical needs but also their emotional  ones,” Dr. Gass says. “One thing I love about my job is getting to know the patients and their families, understanding who they are and what matters to them most. I tap into something to keep patients focused, distracted and living with purpose each day. In Jim’s case, he was a big Yankees fan; we’d talk baseball every day.”

Other patients awaiting heart transplants have created elaborate scenes on dry-erase boards with Dr. Gass or taught him Biblical psalms. “Mental attitude is key to survival, and mental imagery is one of the keys,” shares Dr. Gass. “I teach patients to create scenes of being outside the hospital or to picture something they want to do and miss, like being back home playing with their kids, outside with their pets or even just breathing fresh air.”

Fischer and his family also credit their hospital support group, led by Laura Overton, transplant social worker, with guiding them through a drastic change and its sustained aftermath.

“All of a sudden, our patients have to transition from the shock of: ‘I don’t want to get a heart transplant,’ to the urgency of: ‘When will I get one?’ They have to quickly adjust to the rigors of treatment,” Overton says.

With his I.V. pole beside him, Fischer would walk 20 to 30 laps around the hospital unit each day, if he could. He got to know and interact with many along the way. “[Fellow cardiac patients] used to see me and ask for help or advice. I’d remind them to appreciate their chance to be here; that’s what I tried to do. Eventually, they all got their hearts.” One by one, Fischer saw the patients he’d consoled and encouraged leave the hospital with a new chance at life.

In the meantime, family life for Fischer carried on. Each of his three children, Jaci, Scott and Tiffany, celebrated their birthday at the hospital. Easter eggs and were hidden on the “the fifth floor,” as his family began to call Fischer’s hospital room home. Fischer caught nearly an entire season of Yankees baseball from his room, often with his friend Sal. Fischer and his other “transplant buddy,” Carl, spent many days and evenings discussing the muscle cars they would fix up together and drive, once they were out of the hospital.

In August, after five months of waiting, Fischer’s health began to falter, and he was placed in the ICU, sustained with a balloon pump. Lacking the strength to walk or talk, he slept most of the time. His skin was gray, his breathing shallow. His family turned to their fifth-floor friends, and to each other, for support.

Finally, later that month, Fischer received the call he had been waiting for. Kathy Brown, Senior Transplant Coordinator called to say he would be receiving a heart. “I felt glad. I felt sad. I didn’t know how to feel,” Fischer recalls.

A full day after the surgery, Fischer awoke. “I could talk, but anything else — even sneezing or coughing — really hurt,” he says. Medications helped curb his body’s potential rejection response to a foreign organ, but just two weeks later, Fischer walked out of the hospital.

“He looked up at the sky,” Debbie remembers, “and all he wanted was to see the ocean.” With just enough time left for a late-summer road trip, they went to the Jersey Shore.

These days, Fischer returns to Dr. Gass on a regular basis for angiograms and heart biopsies, an outpatient procedure in which samples of heart muscle are obtained using a tube through the groin or the neck, giving access to the heart.

“We fully expect patients to enjoy long lives, decades after a transplant,” Dr. Gass says. Although Fischer can’t haul Sheetrock or cinder blocks, he relishes his time with family, his second chance at life, and keeps in close touch with the nurses who saw him through his stay. “Jim called Dr. Gass’ nurse, Kathy, a year later, to sing ‘Happy Birthday,’” Debbie says. “She was thrilled to hear from him.”