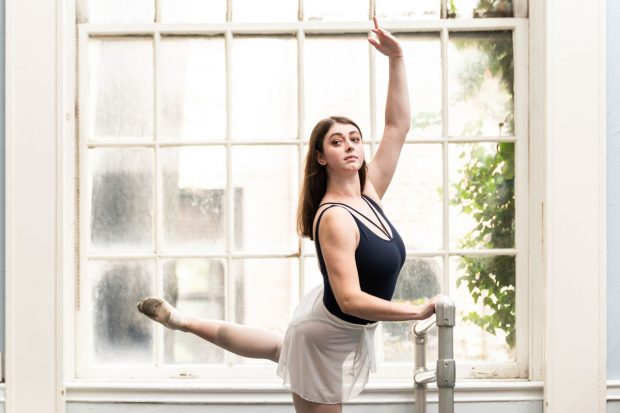 By Melissa F. Pheterson
As seen in the December 2020 Issue of Advancing Care.

Dance majors like Allison Feller need to maintain total control of their bodies. But in her first spring semester at Marymount Manhattan College, the 19-year-old dual dance and psychology major began experiencing seizures that resembled ticks or neck spasms.

“My eyes and neck would start twitching to the left,” she says. “It lasted less than a minute. But I couldn’t regain control even though I was conscious the whole time, and I never knew when it would happen.”

When Allison returned home due to the COVID-19 shutdown, a seizure occurred in her sleep, waking her. Because the episode soon subsided, and given that the pandemic was then at its peak in New York, she and her parents put off evaluation. Following a visit with her pediatrician, she was referred to pediatric neurologists affiliated with the Westchester Medical Center Health Network (WMCHealth). The MRI they ordered revealed “shocking news,” says Laureen: a tumor slightly larger than a golf ball, encroaching upon a brain region critical to body movement. Allison’s neurologists referred her to Carrie Muh, MD, Chief of Pediatric Neurosurgery at Maria Fareri Children’s Hospital, a member of WMCHealth.

“This was a tumor at her right frontal lobe, at the top of her head, in front of and pushing on the motor cortex, the area for movement control for the left side of her body,” says Dr. Muh. “The swelling extended throughout the frontal and parietal regions. And there was midline shift: The brain’s midline membrane was being pushed over to the left from the size of the mass.” Dr. Muh identified the mass as a convexity meningioma.

“Meningiomas are very rare in adolescents,” says Dr. Muh. Though not cancerous, the swelling and shifting the tumor caused meant that her seizures would only become more frequent and severe.
Dr. Muh performed a craniotomy, temporarily removing a portion of scalp and skull for a clear view of the brain. She also removed the dura, or lining, that the mass had invaded. The next step was to determine the exact location of Allison’s motor cortex, so it wasn’t damaged while removing the tumor. For precision mapping, Dr. Muh placed tiny electrodes under the lining of the brain that allowed her to monitor movement in Allison’s arm and leg muscles.

“The outcome is worth the whole surgery experience and recovery. Just the fact that I don’t have to worry anymore is such a relief. I will never take for granted the ability to move.”
— Allison Feller

As her team stimulated muscles, Dr. Muh watched carefully on a monitor, to determine where the movement areas of the brain were located. During surgery, a neurologist monitored those signals to ensure there was no decreased response or weakness, while Dr. Muh dissected the tumor. “Meningiomas can invade through multiple layers of tissue. In addition to removing the tumor and the affected dura, we drilled off a small portion of skull that was abnormal and may have been invaded. We then filled that defect with a quarter-sized titanium cover,” says Dr. Muh, who achieved a complete removal of Allison’s tumor.

“The next morning, Allison was already doing great and was ready to go home!” recalls Laureen. “She stayed in the hospital just two nights, and the care was wonderful. Dr. Muh was so compassionate and caring, beyond our expectations,” Laureen continues.

Allison has started her sophomore year and resumed her training in modern dance, just six weeks after surgery. Calling her prognosis “excellent,” Dr. Muh says, “Her strength is perfect.”

PRE-OP: “There are no dumb questions when we’re talking about your child’s brain. Write questions down before you come in; it’s common to forget once you’re at the hospital or doctor’s office. We always want to make sure you have the chance to ask about anything that is worrying you. Make sure the hospital has a dedicated oncology team, Pediatric Intensive Care Unit and skilled physicians in other specialties for any issues that may arise during treatment or recovery.”

Common questions from teenagers include: “‘Are you going to shave my hair?’ The answer is no, not beyond a tiny strip about the width of my pinky. Our patients shouldn’t have to look like they had brain surgery. I part the hair and pull it into tiny ponytails, and I wash their hair at the end, so they look and feel good. Younger kids often ask if they will wake up accidentally during surgery. I reassure them that no, the anesthesiologists are very good at keeping them asleep safely.”

Questions patient don’t ask often enough include: “Have you done this before? Have you had good outcomes? What complications have you seen?’ Patients often seem like they don’t want to be rude by asking. But it’s okay to ask! I would want to know that for my kids.”

THE NIGHT BEFORE SURGERY: “Get a good night’s sleep, wash your hair, do not eat after midnight and do not take aspirin. We gave Allison steroids prior to surgery, because of the swelling around the mass, and anti-seizure medication.”

DURING SURGERY: “In Allison’s case, I performed a craniotomy with cortical motor mapping and gross total resection of her tumor. The actual surgery was under four hours; plus, it took an hour or so to set up electrodes for mapping.”

POST-SURGERY: “Patients are monitored in the Pediatric Intensive Care Unit for one night after surgery. Depending on where the surgery is located, patients may have facial swelling. The temporalis muscle on the side of the head continues to near the side of the eye, so if that muscle has to be pulled down to get inside the skull, patients can have a puffy eye for a couple of days.”

To learn more about our pediatric neurosurgery services across the WMCHealth Network, please call 914-775-5437 or visit mariafarerichildrens.org/neurosurgery.

0
One Step at a Time
No Time to Lose