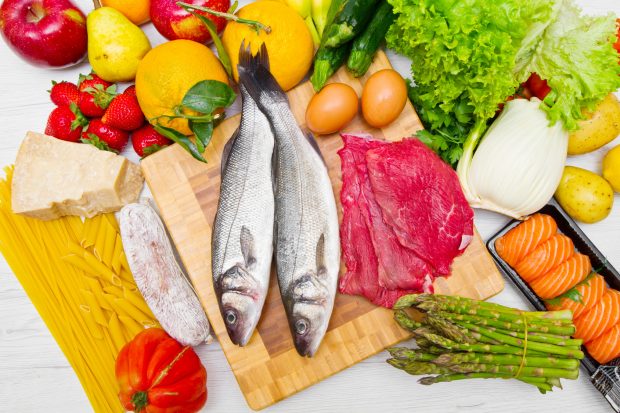 A WMCHealth nutrition expert helps separate fact from fiction regarding diet and cancer.

According to the National Cancer Institute, only 5 to 10 percent of cancers are hereditary. As a result, non-inherited causes of cancer — those based on lifestyle choices such as lack of exercise, smoking and not maintaining a healthy weight — have a direct impact on our overall cancer risk. One of the biggest lifestyle factors is what we choose to eat. Consuming certain foods, as well as specific preparation and storage methods, can directly impact your individual risk of developing certain cancers.
We asked Pauline Hackney, MS, RD, CDE, a clinical nutritionist at Westchester Medical Center, the flagship of the Westchester Medical Center Health Network (WMCHealth), to help demystify some of the common assumptions about reducing cancer risk through diet.

False: All high-fat foods should be avoided.

Fatty fish and other foods high in omega-3 fatty acids – such as walnuts and flaxseed – are encouraged for their cancer-fighting properties.

True: Fruit and vegetables are a key part of a cancer-fighting diet.

Fruits and vegetables are high in phytochemicals, such as antioxidants like vitamin C, lycopene and beta-carotene, and they protect cell health and prevent mutations and other cell damage. Two to three cups a day is the goal! Whole grains, like brown rice or whole wheat, are also anti-cancer.

Many of the foods that are thought to help support cancer treatment are the same as those recommended in the prevention of cancer. Fruits, including those of the citrus variety, as well as berries and pomegranates are helpful. Vegetables, such as those in the cabbage family — including brussel sprouts, broccoli and cauliflower — are also helpful. And foods in the onion family, such as garlic, leeks and chives, are considered to be especially anti-cancer.

True: Vegetarians have a lower risk for cancer than meat-eaters.

Vegetarian and vegan diets – since they typically include more fruits and vegetables than traditional diets – do seem to result
in a lower incidence of cancer overall. However, it’s important
to remember that vegetarians are not automatically immune to other factors that can promote cancer, such as a high-fat intake or excessive alcohol intake.

True: Many types of meats should be avoided in a cancer-fighting diet.

Fatty meats of all types should be avoided. Processed meats – such as ham, bacon, sausage, salami, pepperoni – contain nitrites that may increase the risk of colorectal cancer, and charring meats has been shown to create carcinogens, as well.

Excessive alcohol consumption, such as more than one drink per day for women or two drinks per day for men, increases the risk of cancer.

Unclear: Aspartame is a known carcinogen.

Many studies have been conducted on whether or not Aspartame, an artificial sweetener, causes cancer. However, that research continues, as experts do not feel that a link has been found to date.

Unclear: Food coloring can cause cancer.

Food coloring as a possible cancer-causing agent has been widely debated, but no link has been found as of yet in amounts typically consumed in a normal diet.

Canned foods have been of concern to some people recently, following research showing that Bisphenol A (BPA) — an endocrine disruptor that has been linked to obesity, infertility, diabetes, reproductive problems and preterm birth — is present in many cans on U.S. grocery-store shelves. But although the FDA initiated a ban on BPA from some baby products in 2012, the agency maintains that it is still safe for adults, and no link to cancer is identified. Despite this, many companies have pledged to remove BPA from their cans over the next several years.

Some good news is that in December 2015, the FDA banned three grease-resistant chemicals known as perfluorinated compounds (PFCs) — which had been linked to birth defects, as well as cancer — from use in food packaging like pizza boxes, sandwich wrappers, and microwave-popcorn bags.

True: Inflammation caused by certain foods can hurt in the fight against cancer.

Systemic inflammation is associated with poorer outcomes in the cancer fight, related to the mechanisms that cause cancer and other diseases. Eating healthy food to support one’s immune system can help with immunotherapy, in which a patient’s own immune system is spurred to fight cancer like it does other diseases.

False: Taking vitamins and supplements is essential during cancer treatment.

It seems logical for people to want to take vitamin and mineral supplements during cancer treatment, but some can actually reduce the effectiveness of cancer therapies such as chemotherapy and radiation. Therefore, caution is urged in doing so, and patients should talk to their physicians and/or dietitians before taking any nutritional supplements.

A Mediterranean-style diet — one that’s high in fruits, vegetables and olive oil — is thought to be a strong factor in preventing and treating cancer. However, the diet is also recommended to reduce the risk of developing many other health issues, as well, including heart and cardiovascular diseases, intestinal diseases and obesity.

In general, by eating a diet that contains foods that are minimally processed, high in fruits, vegetables, whole grains and low in animal-source fats, you not only reduce your risk of cancer but also many other life-threatening diseases. “At the end of the day, following as many common sense recommendations for a wholesome diet and active lifestyle should be the ultimate goal that will lead to a longer, healthier life,” according to clinical nutritionist Pauline Hackney.