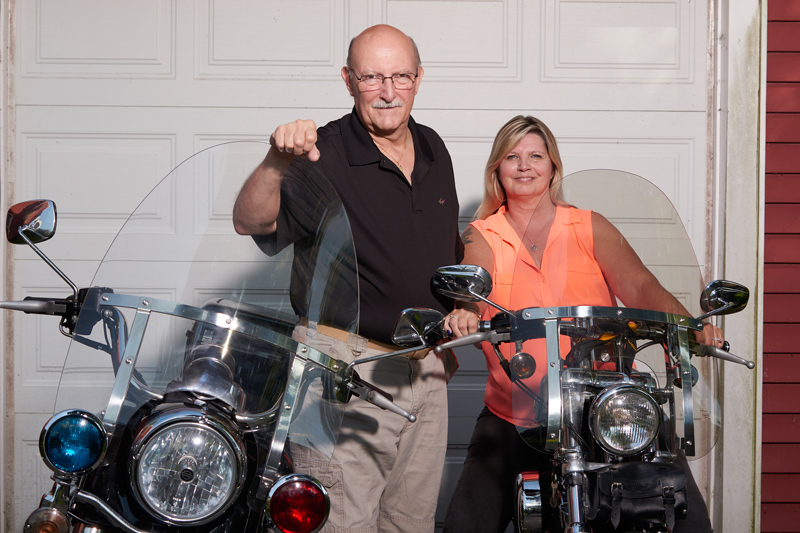 When Ronald Schwandt took a fall that lead to several injuries, it was teamwork that ensured a successful recovery.

In the early hours of September 20, 2016, retired police sergeant Ronald Schwandt, now 67, woke with an achy, painful hip. That’s when the former lawman, who was already scheduled for hip-replacement surgery at St. Anthony Community Hospital, a member of the Westchester Medical Center Health Network (WMCHealth), fell headfirst down his stairs, breaking five ribs.

His former colleagues in the police force rushed to his home, insisting he take an ambulance to the nearest hospital. “It was 2 a.m., and I told them to take me to St. Anthony’s.” As it turns out, Schwandt was also suffering from a brain aneurysm.

“St. Anthony’s treated my broken ribs and ran some tests. I know that the quick decision to send me to Westchester Medical Center saved my life; Dr. Santarelli saved my life,” Schwandt recalls.

“Typically, aneurysms appear in adults ages 40 to 70, and are more common in women than in men,” Dr. Santarelli explains. “The sinister thing about an aneurysm is that patients don’t typically have symptoms until the moment it ruptures, and the symptoms are frequently catastrophic, with a mortality rate between 30 and 50 percent. When this happens, patients have to be managed at a high-volume neurovascular hospital like Westchester Medical Center, which has a [neurovascular] team in place,” Santarelli advises. As a Level One Trauma Center, Westchester Medical Center has neurological ICU nursing support and a team of residents and nurse practitioners who manage the minute-by-minute needs of these critically ill patients.

Because of the direct line of communication between St. Anthony Hospital and Westchester Medical Center, it just takes one call, and a Westchester Medical Center physician is on the phone to expedite each patient’s transfer. “We have direct computerized access to all of our partnering hospitals. This allows us to look at their imaging and to streamline our diagnosis and the treatment plan,” Dr. Santarelli explains.

“Mr. Schwandt had a subarachnoid hemorrhage from the ruptured aneurysm, which probably produced the original fall,” says Dr. Santarelli, who looked at Schwandt’s scans and made the decision to treat his aneurysm in a minimally invasive way. He used an endovascular technique that reduces or eliminates the risk of future rupture. “Nowadays, I treat more than 90 percent of aneurysms using a minimally invasive approach, which has a lower rate of morbidity, lowers the risk of cognitive damage and allows for quicker recovery,” he says.

The procedure was a success, and just three weeks after Schwandt was airlifted from St. Anthony’s Community Hospital to Westchester Medical Center, he was discharged. “Mr. Schwandt is lucky to be alive,” says Dr. Santarelli. As for Schwandt’s perspective on his harrowing experience, he says he has absolutely no recollection of most of his experience. “My wife told me a couple of guys from the police department came to visit and that I was awake, but I don’t remember any of it. I just remember waking up at Westchester Medical Center about three weeks later,” Schwandt says.

Another Neurovascular Success at WMCHealth

On the morning of December 20, 2016, everything was right in Patricia Starick’s world as she sat at her desk, eating Christmas cookies and waiting for her husband to drive her to pick up her car at the local dealership. “I felt fine until I walked into the dealership; everything became dim and then extremely bright. Then, out of nowhere, a popping noise, like firecrackers, started going off inside of my head. I told my husband: ‘I think I’m dying,’” recalls the social director from Warwick. Starick’s husband drove her straight to the emergency room.

Starick, 58, says she remembers running into the ER and that the staff immediately came to her aid. “The ER nurse, Donna King, was the most wonderful, comforting nurse. She looked into my eyes and said something was going on in my brain,” Starick remembers. According to Shuangping Wang, MD, “Patti’s description of the intensity of her headache, along with her history of hypertension, alarmed me,” Dr. Wang says. After a full medical evaluation, she was sent for a CT scan and an MRI and learned she had a brain bleed. “I was put into the ambulance and rushed to WMC, where Dr. Santarelli met me in the ER and confirmed my diagnosis.” Starick would remain under Dr. Santarelli’s watchful care for two weeks, during which he monitored her for blood clots and changes in blood pressure during her recovery in the ICU.

Starick was given a clean bill of health after her two weeks at Westchester Medical Center, and remains under the care of Dr. Wang locally. Today, other than lingering headaches, which are a normal part of the recovery process, she says she feels like she’s on the mend. “I’m happy I had my community hospital to help me. I owe a lot to St. Anthony’s. I was fortunate!”