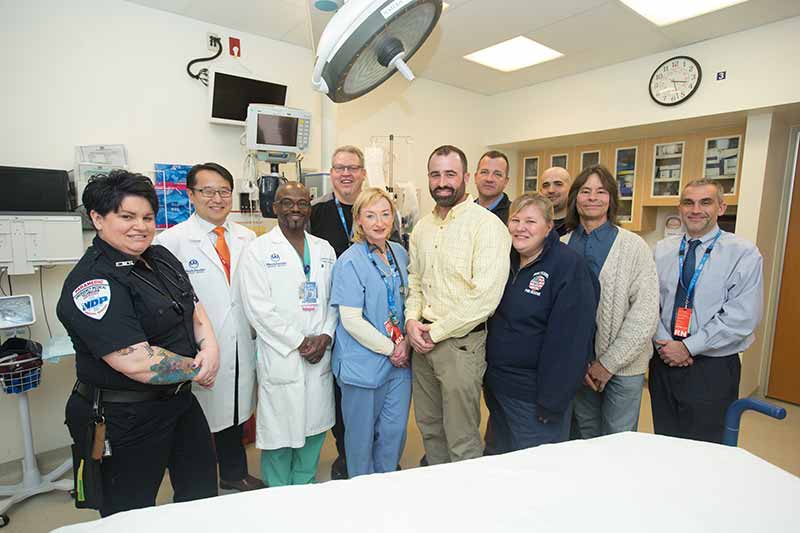 An environmental conservation officer was mistaken for a deer in the middle of a cornfield. Shot in the pelvis, he received the critical care that saved his leg — and his life.

It was November 29, just after Thanksgiving weekend… a dank and foggy late afternoon, shading into dusk. Department of Environmental Conservation Officer James Davey was making his rounds in Gallatin with his partner, Liza Bobseine. Spotting a truck parked in a deserted cornfield, the 39-yearold officer surmised that the two men in there were hunting for deer — although it is illegal in the state to discharge hunting weapons from a vehicle.

“I didn’t approach them at the time,” Davey says. “I figured by the time I got to the truck, they would unload their guns.”

Davey continued his patrol, making a mental note to check in on the truck around 5 p.m. “It was the last thing I was going to do that evening,” he says.

When he and Bobseine returned, “It was pitch-dark, foggy and raining.” Davey began to cross the field.

“The truck wasn’t there anymore, but with the ambient light, we saw fresh tire tracks leading to the back of the field,” recalls Davey. “We followed the tracks, and I could see the silhouette of a vehicle; we heard voices and got down to listen. It turned out the voices were the hunters seeing us crossing the field — and thinking we were deer.”

One of the men inside began to line up his rifle, then discovered he was out of ammunition. His friend saw Davey’s shadow, which had loomed larger than that of the slight Bobseine. “

He lined up my shadow with the rifle,” says Davey, “and pulled the trigger. I heard the shot fire. The next thing I knew, I was lying on the ground, yelling at them to drop their guns and come out.”

The bullet had struck Davey in the groin and he drew his pistol while collapsing to the ground. Bobseine immediately called 911 and ordered the two hunters to guide the ambulance through the cornfield.

Conscious but pale, bleeding profusely and accompanied by Bobseine, he was taken to MidHudson Regional Hospital, a Level II Trauma Center and a member of the Westchester Medical Center Health Network (WMCHealth). “They gave me morphine [in the ambulance], and I felt the relief come over me,” he says.

Dennis-Roger Phillip, MD, a trauma surgeon at MidHudson Regional Hospital, immediately arranged for Davey to receive a blood transfusion. “His blood pressure and vitals held steady for a while but began to teeter when he arrived at our emergency room,” Dr. Phillip says. “His right leg was cold, with no pulse at all. We couldn’t even find a pulse on the ultrasound. The worst fear for him — and us — was that one or both major blood vessels to that leg had been severed, placing the entire limb at risk. It soon became clear that this was a life-threatening injury.”

Davey was placed in an induced coma, so his doctors could assess and contain the damage.

“He was in shock, in excruciating pain and losing the blood we had given him,” says Dr. Phillip. “We needed to know what the bullet did between the time it hit the groin and the time it exited the right buttock. Did it burrow through his abdomen? Did it damage any vessels? Where was the source of the bleeding?” 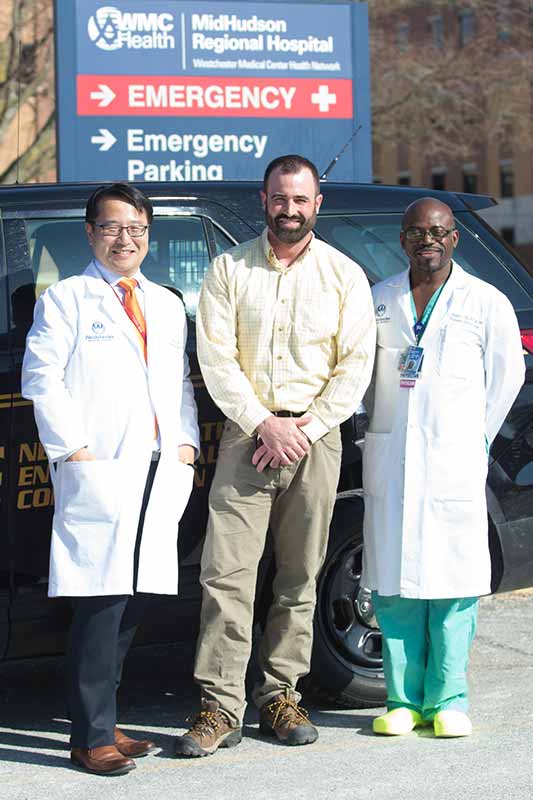 “There was a large hematoma, or collection of blood, as a result of extensive bleeding into the thigh. We had to lessen the bleeding,” says Dr. Phillip. Once he took control of the aorta, Dr. Phillip was able to decrease the blood flow to Davey’s pelvis. “Next, we identified the source of the bleeding in the groin entry wound. We clearly saw that the right femoral vein had been severed. And upon inspecting the artery, we found the bullet’s ‘blast effect’ caused injury to his right femoral artery, to the point it had become occluded, with no blood flow to his leg.”

Dr. Kwon quickly set about repairing the artery and vein, to restore blood flow to the leg. “The bullet injured both major vessels in the patient’s leg: the artery, which carries blood from the heart, and the vein, which carries blood to the heart,” says Dr. Kwon. “With that sort of trauma, Officer Davey was at significant risk of losing his leg. Our job was to salvage the limb, by repairing damaged vasculature and restoring blood flow to the leg.”

Dr. Phillip and his team performed a fasciotomy — cutting away the fibrous tissue sheath encircling the musculature (fascia) — of the leg, in an effort to restore circulation.

“If we didn’t take control of the blood flow, we knew he would die,” says Dr. Phillip. “But once we did take control, we wanted a leg that has not only flow but also function.”

All told, the operations lasted nearly six hours. “When they brought me out of the induced coma,” Davey recalls, “the doctor said, ‘Wiggle your toes.’” When Davey complied, the room exploded with cheers.

Davey was later told that he had lost three times his blood volume. “A simultaneous femoral-artery/femoralvein injury in penetrating trauma is often a death sentence,” Dr. Phillip says. “We were fighting against statistics.”

When Davey was discharged three weeks later to begin rehabilitation, every doctor and nurse involved in his care had lined up in the hallways, clapping and cheering. “It tugged at my heartstrings,” Davey says. “My doctor says the chances of surviving this kind of gunshot wound in a cornfield were about 15 percent. My partner, the doctors, the nurses…they saved my leg and saved my life.”

Pictured above: Four months after the shooting, Officer James Davey (center) was reunited with Dr. Kwan and Dr. Phillip and other members of the trauma team, emergency department and emergency medical transport team.