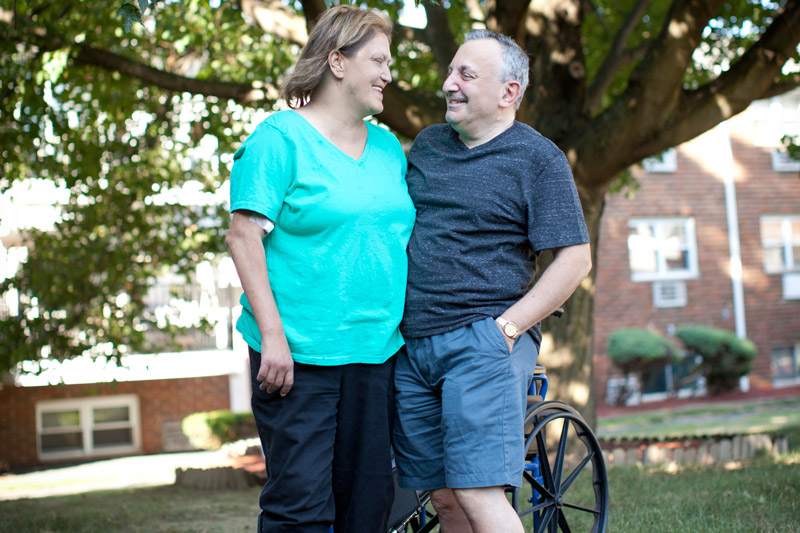 A stubborn wound is now healing thanks to hyperbaric oxygen therapy at MidHudson Regional Hospital.

When Antoinette Anzalone found an ulcer on her little toe in January, she knew she had a big problem. With numerous family members diagnosed with diabetes — herself included, at just age 17 — the 47-year-old headed straight to the ER and ended up hospitalized for 10 days. After numerous and varied treatments, her toe became worse.

She sought the care of Nidhee Dubal, DPM, a podiatrist based in Poughkeepsie. “Antoinette had vascular disease and a diabetic foot infection with gangrene of her toe,” says Dr. Dubal. Only one option remained: Dr. Dubal had to remove the toe, along with the metatarsal, the bone in the foot that extends from the ankle to the toe.

Anzalone’s diabetes was complicated because of a condition called peripheral arterial disease (PAD). PAD occurs when the tiny arteries in the extremities become increasingly narrow, restricting blood flow, much like what happens with heart disease. As the condition progresses, these tiny arteries in the hands or feet can become too damaged to deliver oxygen-rich red blood cells to the tissues. After the cells die from lack of oxygen, gangrene sets in. As was the case with Anzalone, the only option remaining is amputation. With her toe and metatarsal now gone, Anzalone had a significant wound that had to heal. Given her condition, how could the damaged tissue in this much bigger wound get enough blood, and thus oxygen, to recover from the surgery?

Fortunately, Anzalone selected the Center for Wound Healing and Hyperbaric Medicine at MidHudson Regional Hospital (MHRH), a member of the Westchester Medical Center Health Network (WMCHealth) for her follow-up treatment. She had some previous experience with hyperbaric oxygen therapy and knew it might succeed where traditional medical treatments had failed. First, Anzalone would lie down in what resembles a transparent space capsule, one of three at the Center. Once the chamber is sealed, it’s pumped with pure oxygen and pressurized to two and a half times the normal atmospheric pressure. This forces oxygen into the blood at a much higher concentration than is otherwise possible. This process allowed the oxygen to saturate the tissue in Anzalone’s foot, strengthening those cells in her wound that were struggling to mend.

The effects of this super-saturation of blood oxygen last for several hours, so the procedure is done as an outpatient, which allowed her to return home until the following day’s treatment. Her wound is healing beautifully, just as it has for many other patients. Since 2005, more than 40,000 treatments for chronic, non-healing and slow-healing wounds using various therapeutic modalities have been rendered at MHRH.

According to Jayesh Modi, MD, FACS, RVT, Medical Director of the Center for Wound Healing and Hyperbaric Medicine, “Hyperbaric oxygen therapy also helps patients with various other conditions, such as bone infections, tissue damage from previous radiation therapy and compromised skin flaps created as a part of the reconstructive procedures to cover tissue defects,” he notes.

Dr. Dubal has seen this therapy work even in the most difficult cases. “When these patients come in, they usually have multiple disorders and can be very sick, which makes it more difficult to heal infections and wounds,” says Dr. Dubal. The Center for Wound Healing has several disciplines available to care for many different facets of medical management, nutrition and diabetes education, labs and more.”

Anzalone is happy. “I don’t think my foot would have healed up without hyperbarics,” she says. For those who may be wondering if being in the chamber ever made her nervous, she says with a laugh: “Not at all. I felt like Sleeping Beauty, waiting for my kiss. Only my prince — my fiancé, Thomas — was in the room, waiting for me.”

Pictured: Antoinette Anzalone and her “Prince Charming,” her fiancé Thomas, near her home in the Hudson Valley.