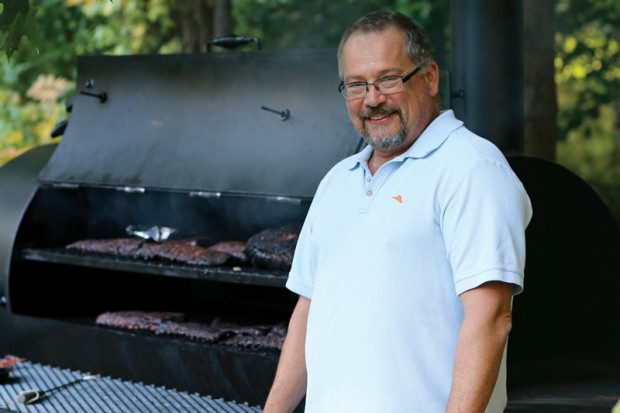 He’s talking about Alan Pinto, MD, the department’s Associate Director. The two have worked together at Maria Fareri Children’s Hospital for almost 20 years.

When he’s working in the Pediatric Intensive Care Unit, Dr. Pinto sees patients from birth to 21 years old. Cases range from a newborn experiencing the world for the first time while struggling to survive a congenital defect, to a 10-year-old undergoing a bone-marrow transplant, to a teen who’s been involved in a serious accident.

“Maria Fareri Children’s Hospital is the only pediatric Level 1 Trauma Center in this area certified by the American College of Surgeons,” says Dr. Pinto. And with a 97 percent survival rate of children coming in for critical care, he is understandably proud. “It’s a reflection of the great nursing staff, as well as the doctors,” he says. “We work as a well-tuned team.”

After what can often be a high-stress day, Dr. Pinto has been known to blow off steam — or make that smoke. His pride and joy is an 84-inch meat smoker, which he uses to prepare award-winning barbecue. He’s won best barbecue in several Westchester competitions and will be entering this year’s Hudson Valley Rib Fest. But it’s not just about the pork, brisket, elk, moose, venison or chicken. It’s about the sauce, too, which is why he rejects store-bought sauces and rubs in favor of the ones he’s developed himself.

His bacon is so well-regarded that it’s served at Peter Pratt’s Inn in Yorktown Heights, where his friend Jonathan Pratt is both owner and chef. It’s a mutual effort, Dr. Pinto says. “Jon cures the meat, and I smoke it, so he always kids around that the chef cures the bacon, but the doctor smokes it.” On the menu, and to the foodie world, Dr. Alan Pinto is known as “Big Al.” In fact, his house-cured boar-bacon mac and cheese was even extolled in a New York Times review of the restaurant, and his bacon was mentioned on a recent episode of FiOS1’s Restaurant Hunter.

Pratt explains why Big Al’s barbecue is so special. “A restaurant that serves 300 to 400 meals a night puts its meat in a big electric smoker, and there’s no personal touch. Al’s is different; he doesn’t just load up the machine and set a switch. He treats each kind of meat differently; he knows the right amount of smoke for each. I put him up there with some of the famous smokehouse places. Al is of that caliber.”

Such praise from an eminent restaurateur like Pratt must be extremely gratifying to Dr. Pinto. Yet, nothing compares to what he does at Maria Fareri Children’s Hospital. “The most satisfying thing in critical care is seeing your patients walk out of the hospital. Just to know you were able to give that child a second chance in life is, to me, the best thing ever.

0
Will Using Earbuds And Headphones Harm My Teenager's Hearing?
Transformed