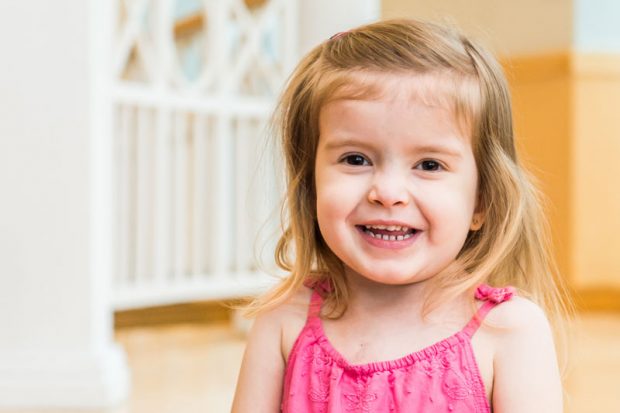 How Maria Fareri Children’s Hospital’s comprehensive approach to pediatric cardiology is saving lives… one child at a time.

For expectant parents Paul and Christina Pinto of Pelham, a routine 16-week ultrasound turned their world upside-down. The screening revealed that their baby, Sophia, suffered from a congenital heart defect called hypoplastic right heart syndrome. The condition is marked by the underdevelopment of the valves controlling the passage of blood from the body through the heart into the lungs and the right-side pumping chamber.

To treat this concerning diagnosis, they turned to Maria Fareri Children’s Hospital, a member of the Westchester Medical Center Health Network (WMCHealth), which is equipped with a dedicated, multidisciplinary pediatric cardiovascular team. The only team of its kind in the Hudson Valley, the Maternal Fetal Medicine group at Maria Fareri Children’s Hospital provides comprehensive care for complex congenital heart disease patients from birth all the way into young adulthood.

Christina had been receiving obstetric care in Greenwich, but, says Christina, “Once they confirmed Sophia’s right ventricle was not developing and that she would require a series of surgeries that were essentially open-heart, I switched my care over to the Maternal Fetal Medicine group at Westchester Medical Center so that Sophia would have immediate access to the pediatric medical team from the moment she was born.”

Diagnosis and sometimes even treatment in utero is becoming the standard, according to Gewitz. “More and more, the diagnosis for congenital heart disease is made in utero. Sometimes, as in Sophia’s case, these newborn babies need medicine to restore circulation almost immediately after delivery. In the more complex cases, mothers are directed to the high-risk service at Westchester Medical Center,” says Dr. Gewitz of WMCHealth’s flagship affiliate. “There, the pediatric cardiologists are available to consult with the maternal fetal medicine team and develop therapy as soon as the baby is born.”

Such was the case for Sophia’s delivery. “The whole time I was pregnant, the pediatric cardiologist, Dr. Bernard Fish, monitored the baby’s development. He worked with the team on her treatment plan because he knew once she was born, Sophia’s heart did not have the ability to pump blood into her lungs,” Christina explains. According to Christina, everyone was well prepared for the delivery in September 2013. “The NICU team was in the room at delivery. I remember them whisking her away to stabilize her heart the moment she arrived!”

Thus marked the beginning of Sophia’s journey to heart health. 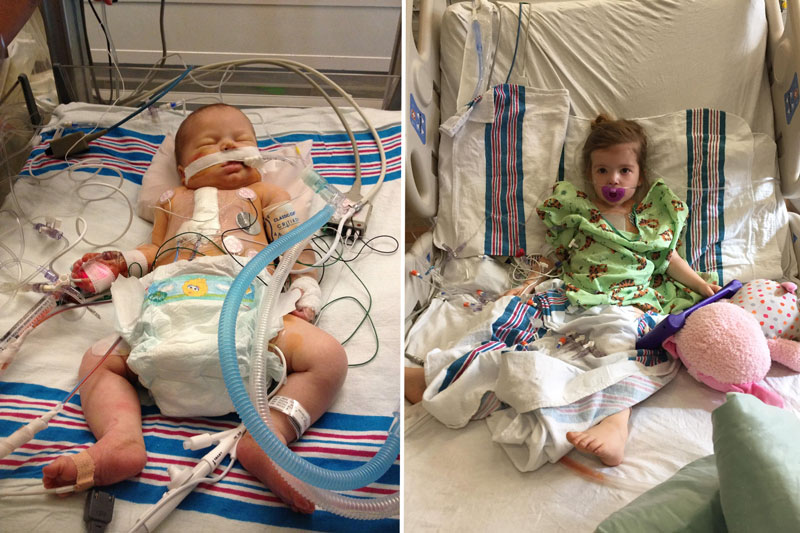 When Sophia was a newborn, the NICU team whisked her away to stabilize her heart. She has been cared for by the Maria Fareri Children’s Hospital team ever since.

Once baby Sophia was stabilized, she was taken to the Children’s Hospital’s Pediatric Catheterization Lab, where the team measured and analyzed the impact and severity of her defect. “That night, we learned Sophia’s prognosis was even more severe than originally thought,” Christina recalls. “This meant that her surgery was going to be higher-risk than we anticipated. This was the single scariest event of our life, because we didn’t know if we would get her back.”

Sophia ultimately required a procedure known as the Fontan operation, which would be done as the last of three stages over the next few years. The first of those open-heart surgeries was completed when Sophia was just 1 week old, by the Children’s Hospital’s pediatric cardiovascular team. The surgery was a success, but by February 2014, Sophia’s oxygen levels were once again seriously low. So, Sophia had her second surgery on Valentine’s Day, at 4 months old.

“Back then, Sophia’s skin always had a tinge of blue,” Christina explains. “She was never able to be very active. As a toddler, she was only able to walk about 20 steps before she needed us to pick her up. And she was so sad that she couldn’t run around with her big sister.” Then, before her third and final surgery, things took a turn for the worse. “We knew she was getting closer and closer to that third surgery because she had decreased oxygen, worsening fatigue and was having a harder time just moving around,” Christina explains.

Sophia had her third surgery in June 2017, and to everyone’s enormous relief, it dramatically transformed her health. Today, Christina and Paul say she is like a new child because her energy levels and spirits are so greatly improved. “She can run without getting out of breath. That blue skin tone is gone, and she is so pink and healthy. And she can run around with her big sister, Isabella!” Christina says.

With the open-heart surgery successfully behind them, the Pintos look forward to returning to Maria Fareri Children’s Hospital only twice a year for routine checkups.

Dr. Gewitz says such results are possible because of the continuity of care available through the pediatric cardiology program at Maria Fareri Children’s Hospital. “Our patients become lifelong patients, and we are also working with our adult-cardiology colleagues in the exciting new field of adult congenital heart disease,” says Dr. Gewitz, “to care for these patients as they grow into young adulthood and beyond.”