Star Runner, Back on Track 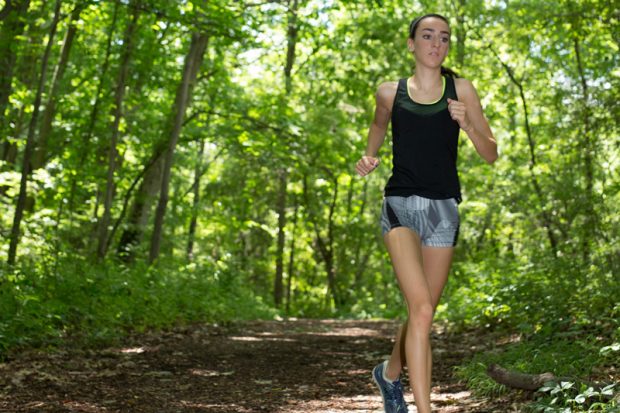 How a local student athlete returned to breaking records after being treated for a rare disorder.

Caroline Timm, a premier long distance runner at Our Lady of Lourdes High School in Poughkeepsie, began running for fun and fitness when she was a little girl. Quite literally, she followed in the footsteps of her older brother, Luke, by running around the track behind him while he trained as a high-ranking high school runner. By her sophomore year in high school, she was being scouted by collegiate track coaches and had won medals for track in races on the regional, sectional, county and state level. She planned to parlay her impressive track records into winning a scholarship to a good college.

But Caroline’s dreams and her lifelong love for running nearly sidelined her. A rare heart condition that can lead to sudden cardiac arrest  threatened to end her promising racing career. And, this rare condition required an equally rare procedure to correct it.

The first time Caroline became aware of anything abnormal was at a doctor’s visit, when it was discovered that she had a murmur. Then, one Saturday evening in June 2015, while preparing for a state track meet, “She felt really dizzy, like she might pass out,” recalls Caroline’s mother, Lisa Timm. “We thought she had just been working too hard. But the next day, at midnight, she had a pain in her left arm, and her neck and jaw hurt. I drove her right to our local ER.”

Hospital staff monitored her until 5 a.m. Though doctors didn’t find anything, they wouldn’t approve her participation in the weekend State track meet until she saw a pediatric cardiac specialist from Maria Fareri Children’s Hospital, a member of the Westchester Medical Center Health Network (WMCHealth) and the children’s hospital for the Hudson Valley. With an appointment to see Julian Stewart, MD, Director of the Pediatric Hypotension Center and Pediatric Cardiac Research, during the week, the State meet still seemed possible.

At Caroline’s appointment, Dr. Stewart connected her to an EKG and immediately diagnosed a rare disorder, Wolff-Parkinson-White syndrome (WPW), in which an extra electrical pathway in the heart causes a rapid heartbeat.

WPW affects fewer than 20,000 Americans each year, is present at birth, and can have a degenerative effect on the heart. It’s caused by an abnormal electrical conduction pathway between the heart’s atria and ventricles. Symptoms such as Caroline’s occur when there’s a short circuit in the pathway.

Dr. Stewart referred Caroline to Irfan Warsy, MD, Director of the Pediatric Electrophysiology program at Maria Fareri Children’s Hospital. “Her heart rate was 240 beats a minute, about four times faster than normal, during an episode,” recalls Dr. Warsy, whose expertise includes the diagnosis and management of complex arrhythmias in children and young adults. “Her body wasn’t getting the oxygen it needed. Limiting activity meant a huge lifestyle change for her.”

Caroline was restricted from track and told she couldn’t compete in the State track meet, a huge disappointment to the dedicated running champion. Beyond restricting her physical activities, another interim solution – Atenolol, an adrenaline blocker – was prescribed until the following month when her condition could be treated with a corrective procedure.

Dr. Warsy used an ablation procedure (a catheter-based technique) to treat Caroline. The catheter ablation requires no incision. Instead, a very fine needle and a catheter are inserted in the femoral vein. Since 2011, Warsy has done nearly 250 ablation procedures on children at Maria Fareri Children’s Hospital.

“Dr. Warsy was so amazing. He spent an hour with us, and explained everything so thoroughly,” Lisa says. “We felt very confident, like we were in very good hands.” Even still, Lisa says she knew Caroline was really nervous during the early morning drive to the hospital last July.

When Dr. Warsy came in to talk with the Timms on the morning of the procedure he explained there was one small risk. “He said there was a very small chance that the lesion could be near her AV node, or the gatekeeper to her circulatory system,” says Lisa.  Dr. Warsy adds, “Previously, I would not have performed the procedure because the risks to the intrinsic conduction system are especially high when the ablation lesion is placed in the immediate vicinity of the AV node.”

But, as he explained to Lisa later, just as he was about to say, ‘We can’t do the procedure,’ he recalled case studies that had been published in adult medical literature where the “short circuit” was approached from the left side of the heart in a retrograde, or backwards, fashion via the arterial system, bypassing the major veins in the circulatory system altogether.

“I was able to burn that pathway through the aorta, a very novel procedure that’s only been done a handful of times on children in the U.S. This was the first time this type of catheter ablation procedure was performed here at Maria Fareri Children’s Hospital — and it’s still very rarely used on adults. The pathway was immediately disintegrated,” says Dr. Warsy.

In just a few weeks’ time following the procedure, Caroline was back on the track, training for the 2015 cross-country season. “By September, at Caroline’s two-month check-up, all was fine and in essence, her normal function was restored. We saw no recurrence of the pathway on the EKG and her symptoms were gone,” says Dr. Warsy.

“The procedure allowed me to get my health back to normal, and to run even faster than I had before,” said Caroline. “I have since set personal records in the cross country 5K races (18:21) and in the 1500 meter (4:32) and 800 meter (2:13).” In fact, Caroline broke all the cross country records at Our Lady of Lourdes High School and was named the Poughkeepsie Journal’s Cross Country “Runner of the Year” and “Athlete of the Year” for the 2015-2016 season.

“It’s been a little over a year now since my procedure, and physically I feel great,” she said. “I’m so blessed to have been given the opportunity to have my heart problem corrected, and that it turned out successfully. I had the best doctors who knew exactly what they were doing, and who went above and beyond to make sure that I would be able to continue with my passion for running. This experience helped me to become more focused and driven in pursuing my dreams.”

Caroline’s brother will be attending Princeton this fall, and during a preparatory visit to the campus with him, she heard about the college’s summer running camps, which she attended earlier this year. She said, “I learned a lot of new training techniques and running tips from the Princeton coaches and staff while I was there. Everyone was so welcoming and helpful – and the campus is just beautiful. I’d love to go there!”

Though the advanced technology that Maria Fareri Children’s Hospital offers allowed Dr. Warsy to successfully repair Caroline’s heart, Lisa says, “We believe what happened was a miracle. Caroline just turned 16 and she had her procedure done a year ago. She was a little nervous that it wouldn’t work, and a time or two, said she felt a little winded, but I said, ‘You’re fine. Everybody skips a beat sometimes. I know I do.’”

Check out an WHUD radio interview with Caroline Timm:

0
What are the benefits of a 3-D mammogram?
Mud Run Benefits Joel A. Halpern Regional Trauma Center and Burn Center