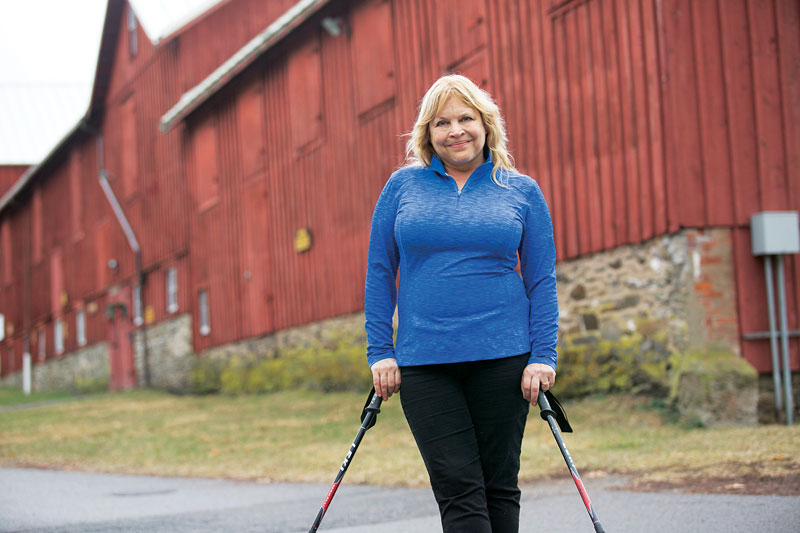 Thanks to cutting-edge robotic technology at MidHudson Regional Hospital, Deborah Horan is once again enjoying her active life.

Wappingers Falls’ Deborah Horan knows the pain of failing knees. Several years ago, a combination of osteoarthritis and an old tear in her meniscus had left the once-avid walker with debilitating discomfort in her left knee. Medications and injections offered little to no relief, the pain becoming so severe that she eventually needed a cane. In 2013, Horan’s orthopedic surgeon, David Stamer, MD, recommended a total knee replacement in order for her to return to the long walks and bike rides she loved.

The process of getting a total knee replacement wasn’t an easy one. “I was in the hospital for three days and in severe pain for a week,” she remembers. Her recovery also meant six weeks off from her job as a programmer at Central Hudson Gas & Electric Corporation. Although in time, she regained the full use of her left knee, when her right knee started to hurt, she decided to consult Dr. Stamer about other options. At age 59, she sought a procedure that would allow her to enjoy her active lifestyle but without the pain and long recovery of a total knee replacement. Dr. Stamer suggested a partial knee replacement, through the use of MAKOplasty, a robotic-assisted procedure available at MidHudson Regional Hospital, a member of the Westchester Medical Center Health Network (WMCHealth).

MAKOplasty, a procedure in which Dr. Stamer employs a specialized surgical robot, uses CAT scans of the patient’s joint that are downloaded to the system’s software. The software then creates a 3D virtual model that helps the surgeon plan the procedure with extreme precision. This approach allows Dr. Stamer to remove only diseased bone, leaving healthy bone intact. The result is a smaller incision and much less trauma to the joint and surrounding tissue than would otherwise be possible. The MAKOplasty partial knee replacement also gives patients a more natural feel and function, in addition to allowing for precise alignment that can decrease the chances of arthritis in the future.

“People think I’m doing the surgery remotely, in another room or building,” says Dr. Stamer. “With MAKOplasty, the surgery is robotically assisted, but I’m in the operating room, right next to the patient, and the robot is there, as well.”

A partial knee replacement isn’t for everyone. First, it can only be offered when part, not all, of the knee is diseased. Second, the knee must be relatively stable. Third, Dr. Stamer says, other non-operative treatment options must be exhausted. These include physical therapy, the use of a cane, NSAIDs and cortisone injections. Another factor to consider is the impact that the arthritis has on someone’s day-today activities and the limiting effect it has on the patient’s lifestyle. “Some people can’t work or do things with their families,” says Dr. Stamer. 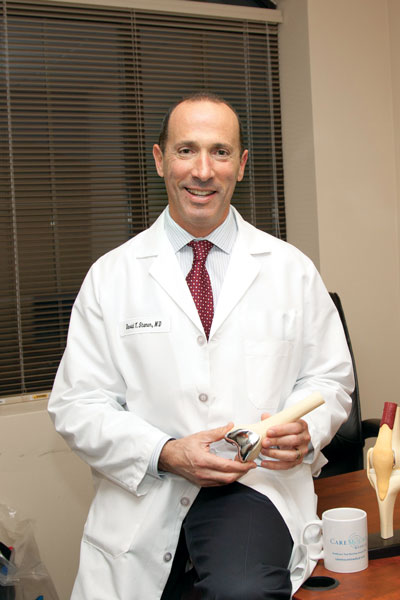 MAKOplasty also results in less postoperative pain and, for some people, can be performed as a same-day surgery. Incredibly, patients are back on their feet the following day.

A partial knee replacement with robotic assistance is also medically less risky than  traditional, or manual, knee replacement.“I’ve done hundreds of MAKOplasty procedures,” says Dr. Stamer. “People are back to work and their activities much faster,” adding that he looks forward to the system being approved for use with total knee replacements, which he expects to happen soon.

Following her successful experience, Deborah Horan is a believer. Although she was required to do physical therapy postoperatively, and she still has to be careful not to get too ambitious with her activities, she marvels at how well she’s doing. Her procedure was performed on August 9 of last year; she walked out of MidHudson Regional Hospital on August 10. She reports she was amazed at what she was able to do during the holidays, just four and a half months later. “We were walking around Grand Central Terminal, to Macy’s and then to Barney’s. My husband suggested the subway, and I said, ‘No, let’s walk!’”

Pictured: Deborah Horan was able to leave the hospital a day after her knee replacement surgery.