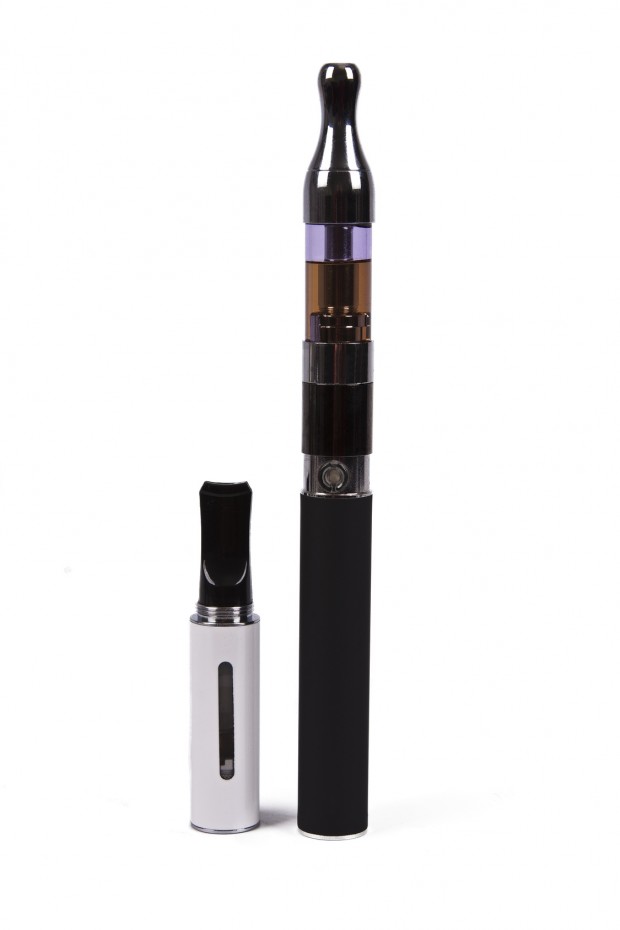 Vapor cigarettes or “e-cigarettes” — cartridges of  liquid nicotine combined with a battery and heating element — are considered among teens as a safer alternative to cigarettes. The facts are foggier.

The Oxford English Dictionary declared “vape”— the act of breathing vapor from an electronic cigarette — Word of the Year in 2014. That’s a good gauge of its popularity. So is a recent Centers for Disease Control and Prevention study revealing that among middle and high school students, vaping has surpassed cigarette smoking in popularity: 13.4 percent of high schoolers reportedly used e-cigarettes in 2014, followed by hookahs (9.4) and cigarettes (9.2). In comparison, only 3.7 percent of adults had engaged in vaping on a regular basis in 2014. Brands are marketed in stores and online, endorsed by the the online support group known as the  “Quit Smoking Community” and touted for taste, vapor production and superior battery life.

But are they harmless enough to merit the hype? We asked two experts: Allen Dozor, MD, Chief of Pediatric Pulmonology, Allergy and Sleep Medicine, and Gilberto Velez, MD, Chief of Adolescent Medicine, both at Maria Fareri Children’s Hospital, a member of the Westchester Medical Center Health Network.

Why is vaping so popular?

Dr. Velez: “First, there is a false notion that vapor cigarettes are safe alternatives to regular cigarettes. Second, they are easy to purchase from smoke shops, gas stations, food marts, and on the Internet. When I am driving locally, I see ‘E-Cigs sold here’ signs all the time. There’s no stigma attached. Third, they can be used without elaborate schemes to conceal their use. You can vape at home, in between classes and at work.  The e-cig can be carried in your pocket and does not smell.”

Why are e-cigarettes more hazardous than they’re perceived to be?

Dr. Velez: “Nicotine has its own serious side effects, especially in young children. It’s a stimulant that interferes with sleep and attention span.” And not only it is very addictive—much more so than cocaine—it also primes the brain to become addicted to other substances. Nicotine is one of the strongest gateway drugs.”

Dr. Dozor: “Sadly, there are no requirements for manufacturers to reveal all of the chemicals in e-cigarettes. When tests are done, they often reveal chemicals that are very worrisome, including lead and formaldehyde—a known carcinogen. As a pulmonologist, I’m frequently reminding children and their families that pretty much any chemical that is inhaled can cause coughing, wheezing, chest congestion and asthma.”

Are some teens adding to the mix even more potentially dangerous substances?

Dr. Velez: “Yes, cannabinoids, or synthetic marijuana, [are being added]. It has been reported that teenagers have mixed cocaine, crystal meth and even heroin with the nicotine.”

Should vapor cigarettes be age-restricted and/or regulated?

Dr. Dozor: “Absolutely. Many studies demonstrate that nicotine is even more addictive when the habit starts in adolescence.  Smokers who start after age 21 find it much easier to quit than smokers who start as teenagers. And while there is a campaign to convince the public that the ‘secondhand’ vapor breathed in is just harmless water vapor, that is not likely. Without a lot of studies, we certainly can’t assume that it’s safe to be around people who vape.”

Even if it’s not the healthiest habit, can vaping deter cigarette use?

Dr. Velez: “A recent study in the Journal of the American Medical Association challenges that popular notion. It showed that 69 percent of students who had expressed no intention of ever smoking cigarettes in the future, but who were exposed to e-cigarettes, progressed toward smoking cigarettes.

How should parents broach the topic with teens?

Dr. Velez: “Parents need to discuss the risks of substance abuse with their kids by the age of 9 or 10. This is when they usually start to experiment with cigarettes. Teens should hear clearly from parents that e-cigarettes are not a safe alternative to smoking. I’m glad when parents ask me about it during checkups; I’d rather discuss that than something like pneumonia, which is so rare in teens. Vaping is far more rampant.”

0
Racing Against Time
The Future Is Now