The Sherlock Holmes of What Ails You 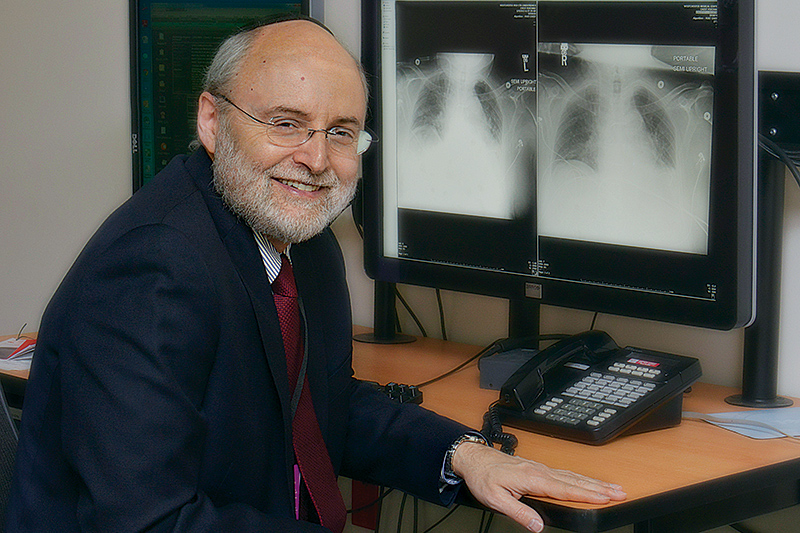 Dr. Zvi Lefkovitz spends his days hunting for clues, but he’s not holding a long-handled magnifying glass and scanning floors and walls for dropped handkerchiefs or fingerprints. “It’s a mystery, what’s going on in medical images,” he says, “unless you’re really trained to interpret them. Mastery of this is a life-long goal, something I find tremendously satisfying and enjoyable.” He practices his art at Westchester Medical Center in Valhalla and MidHudson Regional Hospital in Poughkeepsie.

His specialty is Diagnostic Radiology. “The thing I enjoy most,” he says, “is actually reading X-rays and teaching residents about reading them. Identifying abnormalities on the image is a tremendous skill that takes an apprenticeship of years.”

“It’s the opposite of tennis,” says Dr. Lefkovitz. “In tennis, at 18 years old, because of your physical prowess, you’re at your peak. At 28, you’re retired. In radiology, the exact opposite is true. It’s detective work. If you’ve been at it for two years and have seen maybe 5,000 to 10,000 images of a certain type, you have one perspective of what the range of normal is, and because your understanding of normal is limited you can miss abnormalities. If you’ve had 30 years of experience and you’ve seen 300,000 to 500,000 images, you have a far richer, far greater experience, and you have a profoundly better understanding of what normal is, and it becomes much easier to identify even subtle abnormalities.”

Thirty years ago Dr. Lefkovitz was himself a resident, unsure of his path. He was the first physician in his family; his father was a cantor, his mother a teacher. He’d been interested in science from early on, but wasn’t thinking about becoming a doctor until, in his teens, he took a summer job as an aide in an emergency department. “That was a transformative experience for me,” he says. “I saw you could really make a difference in people’s lives, and I was very impressed with what the physicians were doing.”

He was also impressed that the physicians took time to explain things to him, a teenager, and to involve him in the care. Later, as an intern, after an unsatisfying year in general surgery, he tried radiology. “The first day of radiology residency, within an hour, I said, ‘This is my home.’ I loved the imaging. I loved that you’re a doctor’s physician, since the doctor’s relying on you to explain what the findings are in these images.”

For the last six years he’s been Director of Radiology at Westchester Medical Center, and now he also leads the Radiology Department at MidHudson Regional Hospital in Poughkeepsie (formerly Saint Francis Hospital and Health Center, now part of Westchester Medical Center). As director, he goes on rounds every day to check on everyone: radiologists, technologists, nurses, receptionists, the people sweeping the floor. “When the morale of the staff is very good,” he says, “it makes a huge difference in patient care. They want to be here, they like what they’re doing, and that becomes apparent to patients right away.”

Perry Gerard, MD, Director of Nuclear Medicine at Westchester Medical Center, says Dr. Lefkovitz has completely changed the department, bringing in new technologies, and creating a new area for teaching residents, which makes for a better teaching environment. “Many of the residents look forward to the time they can spend with Dr. Lefkovitz,” he says. Physicians seek him out as well. “They value his expert opinion on cases,” Dr. Gerard says.

Since becoming part of Westchester Medical Center, MidHudson Regional Hospital is now getting significant upgrades. It has, Dr. Lefkovitz says, “a tremendous potential to grow as a community hospital, and of course imaging plays a big role. The goal is not to give patients a good experience; it’s to give them an absolutely phenomenal experience, and nothing less should be accepted. It’s my passion.”

Over the years he and his wife, Arlene, a former occupational therapist, have raised three children. He says he’s been able to work at a “fever pitch” for so many years because of his Orthodox Jewish faith, notably the Sabbath experience “in which once a week you wind down and have a very much more spiritual family-oriented time.” When his now-grown children were young, he says, the Sabbath “was a family event when you’d be able to listen to what they had to say, how their week went, what was going on in school, in their lives, in a way that was unrushed. That day is very special.”

“I started my career at a very young age,” says Dr. Lefkovitz, “and I’ve been very fortunate.” Decisions made by very young people don’t always work out, he notes, and some people have regrets. “I have none of those,” he says. “I’m as passionate today as when I went to medical school.”