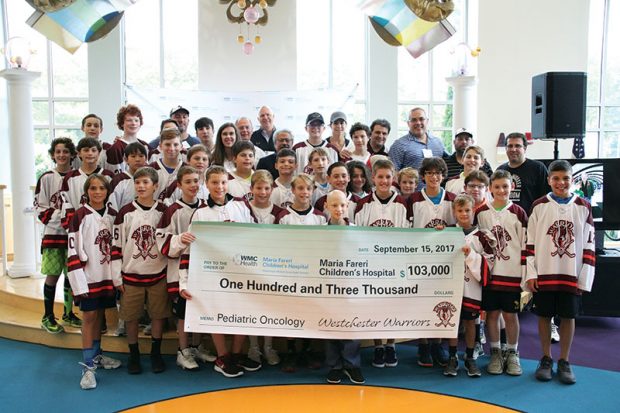 Maria Fareri Children’s Hospital, a member of the Westchester Medical Center Health Network (WMCHealth), recently celebrated the tremendous fundraising efforts of the Westchester Warriors, a youth hockey team that raised more than $100,000 during the team’s 2017 spring/summer season. This amount represented more than 10 times the funds raised in the previous season.

At the celebration, the Warriors announced a $250,000 goal for the team’s total fundraising by next year, and received a $5,000 contribution from Mark and Valerie Seelig to kick off their fundraising that same day. In recognition of the team’s extraordinary efforts, hospital officials unveiled plans to name the Pediatric Cancer Unit entrance in honor of the Westchester Warriors.

The celebration also included an encouraging video message to the Westchester Warriors from Pat LaFontaine, a member of the National Hockey League’s Hall of Fame, and a visit from some of the children’s hospital’s pediatric cancer patients.