This Altruistic Kidney Transplant Is the Ultimate Gift of Friendship 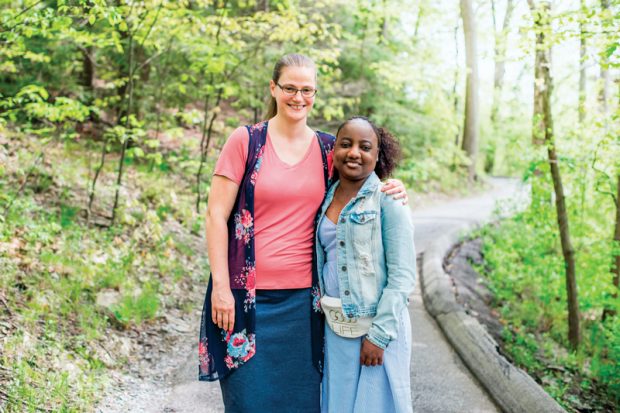 A Kingston woman finds a heavenly match in her fellow church goer.

The idea grew slowly over the course of a year, and in January 2018, knowing that she had the right blood type, “I thought about it for a couple of weeks before saying anything,” recalls Buda, 35.

After learning that a match would be possible, she sent a text message to Dennis. When she read it, Dennis froze in shock, then erupted with joy. “I saw the words ‘We’re a match,’ and I got so excited,” says the 24-year-old resident of Kingston in Ulster County. “My family was so happy.”

If this topic is something you or a loved one might need help with, please don’t hesitate to reach out by calling
914.493.1990 or visiting visiting us here.

“I was overjoyed to hear about the donation,” said Thomas Diflo, MD, Chief of Intra-Abdominal Transplant Surgery at Westchester Medical Center, the only transplant center in eastern New York between New York City and the Canadian border. “Receiving a kidney from a live person, rather than a deceased donor, is the optimal therapy for someone with kidney failure,” he says.

Dennis, a native of Jamaica, first felt ill at age 9. Doctors there diagnosed her with arthritis, but she in fact had suffered from lupus, an autoimmune disease that left her with achy joints, shortness of breath, nausea and a lightheaded feeling.

After moving to the United States at age 16, she joined the Abundant Life Tabernacle Church in Kingston, where she met Buda, who volunteered as a youth-group leader.

Call on us – Transplant Services

To maintain her kidney health, Dennis spent three hours a day, three days a week, at the Dialysis Center at HealthAlliance Hospital: Broadway Campus, a member of WMCHealth in Kingston.

Though a lifesaving treatment, dialysis is also a major time and logistical commitment. But Dennis says the staff helped her feel comfortable. “I love everyone there,” she said. “They made me laugh and kept me company.”

“Our center’s professionals enjoy making our patients feel at home,” said Mary Anne Ervin, LPN at the Dialysis Center at HealthAlliance Hospital: Broadway Campus. “Anna-Kay was so easy to talk to and we treated her like one of our kids or, for younger staff, like a sister.”

Despite her arduous schedule of treatments, Dennis remained focused on her career priority: studying at the Professional Culinary Academy in Poughkeepsie, where she honed her cooking and business skills. Her goal is to open a restaurant or catering facility that specializes in Caribbean cuisine.

Despite the “miracle” opportunity presented by Buda, the prospect of surgery still frightened Dennis. “I was scared, but they were so good at Westchester Medical Center,” she says. “They took great care of me and explained everything in a way that made me comfortable, so that I wasn’t so worried.”

“Improved post-transplant care and protocols have reduced the chances of rejection and infection, while living-donor surgery is far less invasive than in years past, leading to faster recovery times, and recipient surgery is well-established,” he says. “We have an amazing team here with one goal: to make our patients better and to treat our donors with care. This case is a great example of that.”

“Improved post-transplant care and protocols have reduced the chances of rejection and infection, while living-donor surgery is far less invasive than in years past, leading to faster recovery times, and recipient surgery is well-established,” he says. “We have an amazing team here with one goal: to make our patients better and to treat our donors with care. This case is a great example of that.”

Though Buda has a 14-year career as a nurse and works for the VA Hudson Valley Health Care System, she never had experienced surgery firsthand and received a pleasant surprise when her discomfort lasted only for a short time. “It was a really good experience,” she said. “I had no reference point, but it was easier than I thought.”

She remains “impressed with how professional and kind everyone at the hospital was throughout the process. I never realized how much it means to be on the receiving end of a strong human and professional connection.”

During recovery, Buda reflected on her decision. “It’s not such a huge deal as some people see it,” she said. “I went into nursing to help people, and when you get a little older, sometimes you realize that it’s hard to make the impact you had hoped for. This improves Anna-Kay’s quality of life and it shows her that someone cares.”

Dennis also returned to her routine faster and with less pain than she expected. “Everything was just like they said it would be,” she said. “As soon as I woke up from the surgery, I wanted to make sure Jennifer was OK.”

Though they recovered on different floors, they again connected over their cellphones on FaceTime.

“Compassion and empathy are important,” said Buda. “If you have an opportunity to make a difference in someone’s life, it’s worth it.”

0
An Outstanding Level of Care Put This Claverack Man on the Path to Healing
WMC's New Ambulatory Care Pavilion Is a Healing Environment, Close to Home